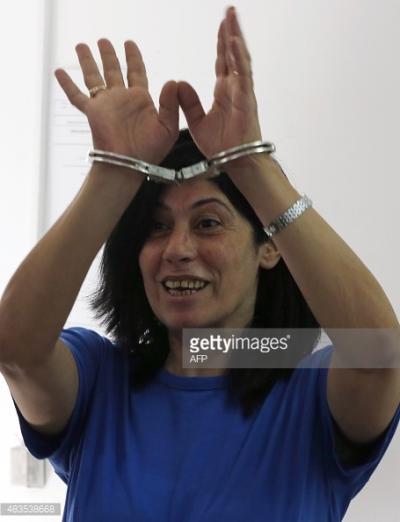 Addameer Prisoner Support and Human Rights Association condemns the deliberate delays by the Israeli occupation’s military prosecution and the military court in the court proceedings of Palestinian Legislative Council’s (PLC) member Khalida Jarrar. Stalling the court proceedings are flagrant violations of fair trial guarantees and an attempt to prolong the arbitrary detention of Mrs. Jarrar in violation of all international human rights and humanitarian norms and standards.

During the court hearing on 8/11/2015, the court heard the testimony of two Israeli policemen who interrogated some of the alleged witnesses during their former detention. The witnesses had testified in earlier hearings that they were subjected to ill-treatment and torture and false confessions were obtained from them through duress. Among the torture methods the witnesses described being subjected to were threats, interrogation for prolonged hours, inhumane detention conditions and duress to obtain confessions against Mrs. Jarrar. After the witnesses denied the confessions, the military prosecution requested considering them hostile witnesses and the court approved that request. The policemen who documented the confessions were brought in for testimony to examine the claims and the interrogation conditions.

In their testimony, the Israeli policemen refused to comment on the interrogation conditions and denied their knowledge of torture, indicating that the torture allegations are during the interrogation by the Shin Bet (General Security Service) and not the police. The prosecution thus decided to call Shin Bet interrogators to hear their testimonies, which adds further witnesses to the ever-growing list of witnesses and thus prolonging the proceedings. One of the Shin Bet interrogators was summoned to take the stand several times and did not attend claiming he was on annual leave.

Palestinian political prisoners often face these long proceedings and policies by the military prosecution aiming to make the proceedings a strenuous process and a tool of repression and control. Palestinian prisoners and detainees suffer a lot during the transfers between prisons and the military courts and vice versa, all being part of a larger policy of pressuring detainees to confess the alleged charges against them and resort to plea bargains just so as to end the severe suffering that the court proceedings causes.

The last court hearing against Mrs. Jarrar further exposed the deceptive and flawed interrogation techniques aimed at obtaining inaccurate confessions from Palestinian detainees so as to fabricate charges against other detainees. During the interrogation with one of the key witnesses in Mrs. Jarrar’s case, the police interrogator asked the witness S. to identify Mrs. Jarrar. The policeman displayed 7 photos before the witness to identify Mrs. Jarrar, 6 of the photos were of men and the 7th was Mrs. Jarrar’s. The policeman tried to avoid explaining his actions which violate legal procedures.

Addameer demands the immediate release of PLC members Mrs. Khalida Jarrar and reaffirms that Israeli occupation seeks to keep her detained for as long as possible without any legal justification. Addameer further calls upon the prosecutor of the International Criminal Court to investigate the legality of arresting members of the Palestinian Legislative Council and putting them on trial by the Israeli occupation’s military courts that lack the minimum fair trial guarantees provided for under the Fourth Geneva Convention.