#FreeThemAll: In Sumoud and Solidarity from the U.S. to Palestine Webinar 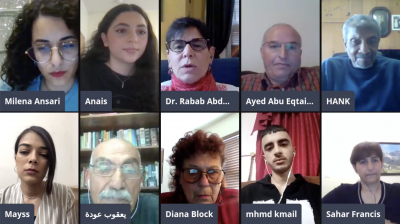 On Palestinian Prisoners' Day, Saturday 17 April 2021, Addameer Prisoner Support and Human Rights Association assisted in organizing and participated in an open classroom webinar, "#FreeThemAll: In Sumoud and Solidarity from the U.S. to Palestine." The open classroom event also marks the fifth anniversary of the U.S. Prisoner, Academic & Labor Delegation to Palestine, convened by Dr. Rabab Abdulhadi and the AMED program at San Francisco State University. The webinar served to highlight political prisoners' voices, discuss the broader role of Israeli military courts in maintaining apartheid, and analyze the links of solidarities between the U.S.-based prison abolition movement and the thousands of Palestinian women and men imprisoned by Israel.

The webinar was co-hosted byDr. Rabab Abdulhadi, director of the AMED program, and Diana Block, founder of the California Coalition for Women Prisoners. Dr. Rabab and Diana began the event with a brief on the start and significance of the fifth anniversary of the U.S. Prisoner, Academic & Labor Delegation to Palestine in March 2016. The Delegation, the first of its kind, was a qualitative phase in building critical solidarities between the U.S.-based prison abolition movement and the thousands of Palestinians imprisoned by Israel and the Palestinian prisoners' movement. The statement that the Delegation issued on 17 April 2016 described the harrowing prosecution of children by Israeli military courts and the condemned practice of administrative detention that delegation members learned about during their trip.

In this vein, Hank Jones,began discussing his background as a civil rights activist and Black Panther Party member before he was incarcerated. He says that it was in his work with the Black Panthers that introduced him to internationalism and the struggles of oppressed peoples abroad, precisely that of the Palestinian people. He recounted his own experience attending the Delegation to Palestine and witnessing the oppressive and colonial conditions present. Nevertheless, Hank says that what struck him the most was the humanity, steadfastness, and sumoudof the Palestinian people.

Mohammad Kamil began talking about his own experiences as a child detainee. He was detained in the middle of the night and spent 12 hours at the military complex with no access to food, water, or even the bathroom. He then spent 40 days in detention in a holding cell that was 2x2 meters large. He described this time as the absolute worst time of his life, made longer by the continued postponement of any hearing or trial, highlighting the judiciary's complicity. Furthermore, he was subjected to multiple forms of physical and psychological enacted to extract a coerced confession. Mohammad highlighted the use of the polygraph lying detector test, where he was forced to take it twice. Mohammad says that these tests should be banned internationally, especially against children.

Later, Mais Abu Ghosh described her detention, right before her last exam to graduate from Birzeit University. She further highlighted the gendered abuse in her detention: she was strip-searched and threatened to have male soldiers direct the search and was harassed and threatened numerous times after rape. Also, she discussed her denial of access to hygiene products and the bathroom when she was on her menstrual cycle, an added, gendered form of torture to inflict greater pain. Her younger brother Suleiman Abu Ghosh was also detained during her imprisonment to pressure Mais during interrogation.

Yacoub Odeh began by noting that the importance of Palestinian Prisoners' Day arose from the longevity of the issue from the beginning of the Israeli occupation, and the continued silence by the international community. He discussed his incarceration at a time when prisoners were prohibited from access to pen or paper and Palestinian prisoners’ fights and evolution. He emphasized the complete denial of Palestinian prisoners' rights where the goal of the Occupation is to starve them and de-educate them, divorcing them from consciousness. Yacoub discussed his work and collaboration in welcoming the U.S. Prisoner, Academic & Labor Delegation to Palestine, where he met with U.S. civil rights leader Angela Davis about the letter, he and other Palestinian prisoners wrote to her during her imprisonment.

In the second half of the webinar, Addameer Director Sahar Francisdiscussed the institutional framework of the Israeli military judicial system. She outlined the base elements of the court that inherently violate internationally recognized rights to a free trial, freedom from torture, freedom from arbitrary detention, and right to health and medical attention. She notes the similarities between the Israeli military courts and other colonial regimes, which led Addameer to launch its campaign in March 2021 against Israeli military courts. Sahar argues that the military courts should be analyzed in their role in maintaining the apartheid system.

Defense for Children International-Palestine (DCI-P) Accountability Program Director Ayed Abu Eqtaishcontinued the conversation by highlighting the role of the military court system regarding child detainees. He says that although Israeli occupation authorities introduced changes to the system for child detainees, such as the juvenile military court, there are essentially no changes in treatment as the basic premises of these courts remain the same. He argues that these legislations are instead meant to grant greater legality to the Occupation and its policies. Moreover, he particularly notes the horrific infliction of physical and/or psychological torture on child detainees to extract a coerced confession.

The webinar concluded with questions from the audience revolving around the topic of what is to be done. Addameer Director Sahar Francis noted the newpetitionl aunched by Addameer to the ICC to investigate war crimes by Israeli military courts. Ayed Abu Eqtaish lauded the newly introduced legislation conditioning aid to Israel on certain human rights conditions, including preventing the detention of child detainees. Other panelists brought up the BDS campaign, art exhibitions featuring prisoners' artwork, the use of U.S. tax dollars to fund the Israeli Occupation and spreading awareness of the issue globally. The event closed with a commendation to the speakers and discussed the fundamental issues of Palestinian prisoners and US-Palestinian solidarity.