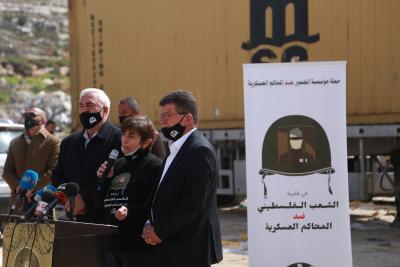 The Chairman of the Palestinian Prisoners' Society, Mr. Fares Qadura, emphasized that no one is exempt from the Israeli occupation's various forms of arbitrary arrests and detentions, including women, children, the elderly, and human rights defenders: it is estimated that every family in the West Bank has had at least one member arrested, tried and/or imprisoned by the Israeli military authorities. Mr. Qadoura endorsed Addameer's campaign explaining that there is a need for a united Palestinian approach against Israeli military courts now more than ever.

Notting Israel's culture of impunity, Al-Haq Director, Mr. Shawan Jabarin, affirmed that the functioning of the Israeli military courts gives rise to serious violations of international law, including the war crime of intentionally denying Palestinian prisoners their right to a fair and regular trial under Article 8(2)(a)(6) of the Rome Statute of the International Criminal Court. Mr. Jabarin further explained that accountability does not only fall on those who carry out the act directly but also on those who "fail to take all necessary and reasonable measures within his or her power to prevent it." Therefore, Israeli military judges may be prosecuted as war criminals.

Read More about the Campaign from Here: http://addameer.org/node/4318