Lawyers for Palestinian Human Rights (LPHR) and Addameer Prisoner Support and Human Rights Association (Addameer) have submitted a complaint to the United Nations Working Group for Arbitrary Detention concerning the Israeli military authorities ongoing unlawful arbitrary detention of three young female Palestinian Birzeit University students from the occupied West Bank: Ms Layan Kayed, Ms Elyaa Abu Hijla and Ms Ruba Asi, aged 23, 21 and 20 respectively. They have been in continuous military detention since 8 June, 1 July and 9 July 2020, and are awaiting trial after being charged with participation and affiliation with a democratic student political group at Birzeit University.

Layan, Elyaa and Ruba were arrested and detained within one month, indicating a disturbing pattern of specifically targeting female students from Birzeit University. Each of the three university students have no prior engagement with the law. They have been given identical criminal charges for: i) affiliation with an illegal group; ii) being present during an illegal gathering; and iii) allegations of stone throwing. Excessive and punitive military law orders have been used to underpin these charges.

The first two charges have been unjustly applied to the peaceful exercise of basic and fundamental human rights: participating in a democratic university student group.  From the beginning of the military occupation in June 1967 through to July 2019, Israel's Defence Ministry has classified 411 organisations as “hostile,” “unlawful” or “terrorist” associations under the Defence (Emergency) Regulations (1945).[1]Members of designated organisations can be criminally charged for their membership in or affiliation with the group. Among the organisations so classified are all major Palestinian political parties, including the ruling Fatah party. University student groups have also been so designated.

This is the repressive context for the unjust imposition of criminal charges against Layan, Elyaa and Ruba for affiliating with a legitimate university student group and for being present at one of its meetings. They are being criminalised and held in prolonged pre-trial detention for peaceful exercise of their basic rights to freedom of assembly, association and expression.

The charge of stone-throwing, which carries a maximum ten-year sentence, appearsto be based on third person confessions obtained under the coercion of military interrogation, rendering such evidence inherently unreliable and arguably inadmissible.

We ask that the UN Working Group on Arbitrary Detention examines Layan, Elyaa and Ruba's cases from a gendered perspective and/or possibly engages with the UN Working Group on Discrimination against Women and Girls. We also provide a list of discrete human rights and due process issues raised by these cases for the UN body to investigate. They include:

·     the use of terrifying night-time arrest raids on the family home;

·     conditions of detention which appears to amount to degrading treatment in breach of the prohibition on cruel, inhuman or degrading treatment or punishment under international human rights law, and their compatibility with the United Nations Rules for the Treatment of Women Prisoners and Noncustodial Measures for Women Offenders (the Bangkok Rules);

·     interrogations without the essential safeguard of having the presence of a lawyer;

·     charges which may be based on third person confessions obtained under duress of military interrogation and alleged breach of the prohibition on torture and other cruel, inhuman or degrading treatment or punishment under international human rights law;

·     no bail hearings so that students are kept in continuous pre-trial detentionfor months following charge and awaiting trial;

·     substantial risk of psychological harm as young people being unjustly detained for a prolonged period and subjected to criminal prosecution; and

·     grave inherent risk of being held in the close confines of detention within the context of an unprecedented global pandemic.

The arrest, military detention and criminal charges against Layan, Elyaa and Ruba fall within an intensifying pattern since August 2019 of the Israeli military authorities detention of Palestinian university students for peaceful exercise of their basic human rights of freedom of assembly, association and expression (please see here a public statement by Birzeit University).

Israel's military authorities are acting in a manner which appears purposefully designed to intimidate other Palestinian university students from exercising their fundamental civil and political rights for fear of receiving similar wholly punitive treatment.

Our complaint to the UN Working Group on Arbitrary Detention follows only a few months after we submitted a complaint (on 21 May 2020) to the same body regarding the near six-month military administrative detention of another young female Palestinian student from Birzeit University, Ms Shatha Hasan. Shatha was detained on secret evidence without charge or trial after being arrested from her home in the middle of the night on 12 December 2019. Like Elyaa, Ruba and Layan, Shatha had not had any previous engagement with Israeli military custody.

LPHR and Addameer are alarmed at the indication of a pattern of systematic targeting of female Palestinian university students. We are closely monitoring this extremely troubling trend.

What we ask for

LPHR and Addameer have requested that the UN Working Group on Arbitrary Detention intervene through urgent contact with the Government of Israel and urge that Ms Layan Kayed, Ms Elyaa Abu Hijla and Ms Ruba Asiare: i) immediately released from detention on bail; ii) their charges based on association with a university student group be immediately annulled given they involve a breach of international human rights law; and iii) immediately annul charges relating to stone-throwing if they are based on confession evidence from third persons obtained under the duress of military interrogations as such evidence is intrinsically unreliable.

We also request that the UN Working Group on Arbitrary Detentionpublicly calls on Israeli military authorities to: i) cease arresting, detaining, and/or charging Palestinian university students for their peaceful exercise of their rights to free assembly, association and expression; ii) cease use of the Defence (Emergency) Regulations (1945); and iii) end the use of military courts to try civilians.

LPHR and Addameer will continue to closely monitor and work on protecting Palestinians university students from ongoing illegitimate targeting, harassment, humiliation and punishment which appears to be widespread, systematic and in clear violation of basic international human rights law protections.

LPHR is a lawyer-based legal charity in the United Kingdom that works on legal projects aimed at protecting and promoting Palestinian human rights. 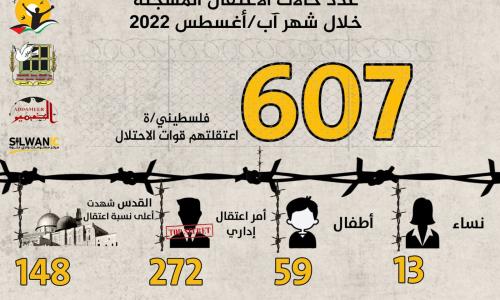