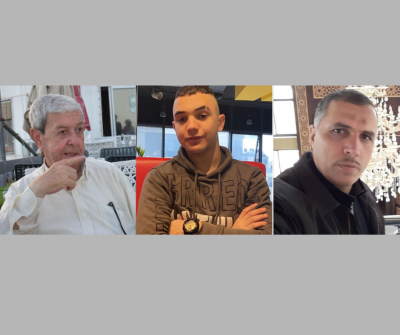 Addameer seeks to highlight three notable cases of at-risk Palestinian administrative detainees, held without charge or trial—Amal Nakhleh, Bashir Khairi, and Abdel Baset Ma’atan—all of whom suffer from pre-existing medical conditions and/or diseases and are at grave risk of developing serious illness from COVID-19.

On 13 January 2022, the Israeli military commander issued the renewal of Amal Nakhleh’s administrative detention order for an additional four months, representing the third renewal and fourth term of his administrative detention order since his arrest on 21 January 2021. Amal suffers from myasthenia gravis, a rare neuromuscular disorder causing weakness in the skeletal muscles, which requires specialized medical care, regular medication, and constant monitoring of symptoms to avoid further health complications. Amal Nakhleh was a child, 17 years old when he was arrested by Israeli Occupation Forces (IOF) from his home in Al-Jalazon Refugee Camp.

During the confirmation hearing on 18 January 2022, both Amal and his legal counsel were not present, due to Amal’s participation in the collective boycott of Palestinian administrative detainees against Israeli military courts, in protest of the Israeli occupation’s policy of administrative detention.[1] Consequently, Ofer military court postponed the confirmation hearing for Amal Nakhleh to 24 January 2022, as Amal will be tried in absentia.

Amal Nakhleh’s case highlights the Israeli apartheid regime’s systematic targeting of Palestinian children, demonstrating that no one is exempt from Israel’s arbitrary policy of administrative detention and deliberate medical neglect, not even vulnerable Palestinian children or when grave health conditions emerge. It should be further noted that IPS refused to grant Amal Nakhleh any of the COVID-19 vaccines, citing his medical condition. As such, Amal is at acute risk of developing severe illness from COVID-19, in addition to lasting health effects that could compound upon his pre-existing conditions.

The arbitrary arrest and continued detention of 80-year-old retired lawyer Bashir Khairi reflect Israeli occupation authorities' persistent endeavors to incarcerate him. This is especially highlighted by the arbitrary and dated charges against him, which, when proven insufficient to incarcerate him, is subsequently turned into an administrative detention order without charge or trial. On 29 October 2021, the Israeli Occupation Forces stormed Khairi's home in Ramallah, arresting him and transferring him directly to Ofer military base. On 1 November 2021, the Israeli military prosecutor requested multiple extensions to the detention of Khairi to 3 November, then 8 November, then again to 15 November 2021, all of which were approved by the Israeli military court. On 15 November 2021, the military prosecutor submitted a list of charges against Khairi relating to his alleged association in an organization deemed "unlawful" under Israeli military orders, citing as evidence events dating as far back as 2000, 2014, and 2017.

Bashir Khairi is a Palestinian lawyer who served as legal advisor to several Palestinian civil society organizations. He is a former political prisoner arrested in 1968 and incarcerated for 15 years in Israeli occupation prisons. Still, noting Khairi's old age, health condition, and the dated charges laid against him, the Israeli military court ordered his release on bail on 21 November 2021. In response, the military prosecutor requested the postponement of his release for 72 hours to submit an appeal, and upon approval by the military court, subsequently requested an extension to his detention until 6 December 2021, which the military court again approved. On 6 December, the Israeli military judge amended the terms of Khairi's release to increase bail to 10,000 NIS, along with a third-party guarantee of 20,000 NIS. Notwithstanding, the Israeli military prosecutor requested to postpone his release for 24-hours. On 7 December 2021, the Israeli military commander issued a 6-month administrative detention order, without charge or trial, against Bashir Khairi, until 28 April 2022, based on "secret evidence" that he constituted an imminent "security threat" to the region.

On 25 October 2021, IOF stormed the home of Abdel Baset Ma’atan, 48 years old, in the early hours of the morning around 2 am in Al-Bireh. The Palestinian detainee was then transferred to a military base. He was left handcuffed in the open air for over two hours before he was transferred to Sha’ari Tzedek Hospital, where, rather than conducting any examinations, he was merely asked about his medical history and current condition.

Abdel Baset Ma’atan suffers from a history of tumor recurrences, notably gastrointestinal and lung tumors, for which he has sought treatment over the years. Ma’atan had undergone several surgeries before his arrest, including removing parts of his intestines in 2018. In addition, Ma’atan began radiotherapy treatment in Turkey, wherein he requires periodic treatment every six months, alongside continuous examinations and CT scans to monitor the spread of carcinoid tumors. In particular, the existence of a tumor in his lung that may metastasize to a carcinoid tumor affecting both lungs if left untreated was discovered shortly before his arrest.

Nevertheless, upon his arrest, Ma’atan received no specialized medical examinations beyond a standard medical check-up. He was transferred to Ofer prison, where he was subjected to a short interrogation, lasting under an hour, during which Israeli interrogators alleged that he was active in an organization deemed “illegal” under Israeli military orders. A few days later, the Israeli military commander issued an administrative detention order against Abdel Baset Ma’atan for a period of six months. Ofer military court later reduced the period of administrative detention to three months, to end on 30 January 2022. Still, Ma’atan faces the risk of renewing his administrative detention order for an indefinite period of time.

Since his detention, Abdel Baset Ma’atan has been subjected to the Israeli occupation regime’s systematic practice of medical neglect. He has not received any personalized medical attention, including the necessary periodic examinations to monitor his carcinoid tumors. Ma’atan is only afforded routine, standard prison medical examinations in Ofer prison clinic and previously prescribed medication to address his high cholesterol and Vitamin D deficiency. As such, administrative detainee Abdel Baset Ma’atan faces dueling grave risks of the recurrence of metastatic carcinoid tumors afflicting other parts of his body, as well as an increased risk of developing severe illness from COVID-19.

Addameer calls upon the international community, including local and international human rights institutions, including the International Commission of the Red Cross, and relevant State parties to demand that Israel, as the Occupying Power, immediately release Amal Nakhleh, Bashir Khairi, and Abdel Baset Ma’atan along with all vulnerable Palestinian political prisoners from Israeli prisons and to ensure their safety, particularly those who are more susceptible to the virus, most importantly prisoners with underlying health conditions, children, women, and elderly prisoners.

[1] The boycott, first announced on 20 December 2021 by all 500 Palestinian administrative detainees, commenced 1 January 2022, under the campaign ‘Our Decision is Freedom… No to Administrative Detention.’ The comprehensive boycott includes Israeli military courts at all levels, including courts of first instance, appellate courts, and the Israeli civil High Court. See: http://addameer.org/news/4662

02-02-2023
In a Joint Submission to the UN Commission of Inquiry, Palestinian Organizations Highlight Israeli Policies to Entrench and Maintain its Settler-Colonial and Apartheid Regime
24-01-2023
Commemorating the International Day of Education by Highlighting the Reality of the Right to Education for Palestinian Political Prisoners
14-12-2022
Urgent Appeal to Commercial Airlines: Avoid Assisting in the Forcible Deportation & Transfer of Human Rights Defender Salah Hamouri
متوفر باللغة العربية