While persons deprived of their liberty around the world are more likely to be vulnerable to a COVID-19 outbreak than the general population, COVID-19 presents a particularly acute and immediate danger to Palestinian prisoners and detainees, who already endure dire detention conditions, including systematic torture and ill-treatment, pervasive medical negligence, overcrowding, lack of proper ventilation and access to sanitary products, including sanitizers and disinfectants, poor nutrition, and, in certain cases, complete bans on family visits. These conditions make Israeli prisons dangerous breeding grounds for COVID-19 and compound the vulnerability of Palestinian prisoners and detainees, with hundreds currently detained suffering from chronic diseases that go untreated. Despite the pandemic, the Israeli occupying forces continue to routinely arrest Palestinians from their homes in the occupied West Bank, including East Jerusalem, and immediately place them in quarantine. In fact, since the beginning of the state of emergency due to COVID-19 in March, the Israeli occupation forces arrested 357 Palestinians including 48 children and 4 women.

Palestinian Prisoners and Detainees Isolated from the Rest of the World

Early March 2020, the Israeli occupation forces enforced a number of emergency measures as a response to COVID-19. For example, on 22 March 2020 the military commander issued an order that halted all family and lawyers’ visits for Palestinian prisoners, citing this measure as a COVID-19 precaution. Furthermore, detainees are not brought to court for their hearings, meaning that their legal representatives are barred from direct communication, and only allowed phone calls with them. There are currently a number of Palestinian detainees placed under interrogation, prohibited from lawyers’ and family visits, and only allowed phone or video calls during their court sessions. This comes also in light of the IPS’s continuous refusal to install landline phones inside prisons, preventing the prisoners from contacting their families. In this situation, the International Committee of the Red Cross (ICRC) is the only entity permitted direct communication and visits to Palestinian prisoners.

Furthermore, on 24 March 2020, the commander issued another order in regards to “arrest of suspects despite having a barrier against conducting interrogations due to COVID-19.” According to this order, the judge at the military court is allowed to extend the detention of any detainee under interrogation despite having a barrier against that, this includes a danger on the health of the detainee him/herself or any other person at the same facility as the detainee.

Also, on 5 April 2020, the military commander issued an order regarding “conducting the court sessions using technological means.” According to this order, sessions should be conducted using a devise that gives both visual and audio live streaming, and if the visual streaming was not possible then at least providing the audio one. Only in specific cases the detainee should be brought physically to the court, that is only when having the session on visual or audio causes damages to the detainee and his file case, though, a detainee in isolation “quarantine” is not allowed to physically attend his/her court session in any circumstances. Moreover, when the session is conducted on audio or visual means, the lawyer and his detainee are allowed communications during, or before or after the session. This order excluded sessions which are for the extension of detention periods, in those session the lawyer and/or the detainee are allowed to be brought to the court session.

Thus, further deepening Israel’s violations of Palestinians’ rights to liberty and security of person and to a fair and speedy trial. Generally, lawyers’ and family visits are conducted on the phone behind a glass barrier, meaning that those visits in particular do not possess any danger on the detainees for the lack of direct physical contact.

Despite the lack of access to information about the detention conditions in all Israeli occupation prisons, though what organizations are receiving is showing the lack of care to Palestinian prisoners. Prisoners not yet given the minimum hygiene needs in such sensitive context.

Palestinian prisoners in Israeli prisons face dismal detention conditions, including overcrowding, unsanitary conditions, lack of proper ventilation and poor nutrition. These make Israeli prisons dangerous breeding grounds for COVID-19 and compound the vulnerability of Palestinian prisoners. In particular, prisoners have reported that IPS has imposed new restrictions on purchases from the prison canteen, and that they are 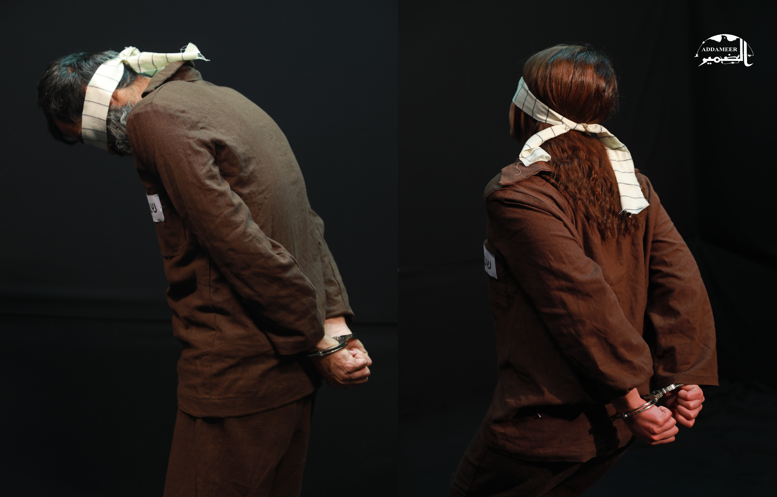 not provided with proper hygiene and sanitary products, putting them even further at risk of an uncontrolled spread. The IPS officers are not taking proper precautions, as they still conduct the daily searches and daily count of prisoners, conducted by officers who are not constantly wearing hazmat suits, protective gloves, or medical face masks. Only recently, the officers started wearing gloves and masks but still irregularly, also for the two daily searches changed to one from inside the rooms and the other from outside. Furthermore, the prison administration gave the prisoners a number of face masks, however, not enough for the section. Also, all transfers between prisons are suspended until further notice.

The Israeli occupying state according is obligated according to a number of international humanitarian and human rights treaties and convention to ensure protection for Palestinian prisoners. Nevertheless, the occupying state continues to violate international laws and even its own laws. For example, the IPS still is not applying the Israeli High Court decisions particularly in regards to personal spaces for prisoners in Israeli prisons which is three meters square for each prisoners including space in bathrooms,[1] which comes in violations to the IPS regulations which states that personal space should be six meters squares for each prisoner.[2]

In 2017 the Israeli High Court made a decision after a petition was filed by a number of Israeli organizations regarding the personal space prisoners have inside Israeli prisons. The decision abides the occupying state to enforce previous ruling regarding personal space in prisons in two stages; the first to be concluded in a period of nine months[3] and the second stage to be concluded in a period of 18 months.[4] Despite the fact that this period of time was sufficient for the occupying state, still, the Israeli General Prosecution appealed asking for a longer period of time until 2027. The Israeli High Court responded to the prosecution with postponing the period for extending the space for each prisoner to four and a half meters until 2020. The same ruling also included the facilities and interrogation centers run by the Israeli Intelligence Agency, however, gave them a longer period of time, in specific, until 2021.

So far, the Israeli occupation authorities did not apply the decisions in total, leaving Palestinian prisoners in further danger of contracting COVID-19.

Ongoing Arrest Despite of COVID-19

The Israeli occupation forces continue arresting Palestinians from their homes in the West Bank daily, who are immediately placed into isolation cells as quarantines. For example, on 19 March 2020, Israeli occupation forces raided Dheisheh refugee camp and arrested three young men. The occupation forces used excessive force during the raid causing major damage to the homes of those three detainees. The damage reached the doors, walls and belongings of the three homes, in addition to terrorizing the residents of those homes. One of those three detainees is Mustafa al-Hassant who was actually released on 20 February 2020 after sending around 20 months under administrative detention without any charges or trail. Mustafa also went through a hunger strike in summer 2019 protesting his administrative detention. Now, after he was placed in an isolation cell for 14 days as quarantine, the occupation authorities issued him a six-month administrative detention order.

Other cases that Addameer followed included the case of prisoner Ahmad Nassar who is a university student. Nassar was arrested from his home on 4 March 2020 and was transferred to Petah Tikva interrogation center, where he spent 16 days in interrogation. During his last days in interrogation, and from his cell he heard guards saying that there are suspensions of having a person with COVID-19 at the interrogation center. He then was provided with a medical face mask, in return, the guards were wearing hazmat suits. One day after, he was transferred to isolation cells at al-Ramleh Prison Clinic where he was informed after one day that he is in quarantine and will stay at al-Ramleh Prison Clinic for 14 days before being transferred to Megiddo prison. Nassar reported that detention conditions were inadequate, particularly in regards to the quality and quantity of the provided meals. He also reported that his temperature was taken twice a day. Nassar in fact, only spent six days at al-Ramleh Prison Clinic, on his sixth day he has a court session and then was released a day after.

Another case was of prisoner Qais Daraghmeh who is also a university student. Qais was arrested from his home on 24 February 2020. He was immediately transferred to Petah Tikva interrogation center where he spent a total of 21 days in interrogations. In his last week at the interrogation center he was at his cell, and did not interact with any guards of interrogators. He was also able to hear guards speaking of suspensions that one of the interrogators at the center might have the corona-virus, though, he was not informed officially but after four days when he was given gloves and medical face mask and then transferred to isolation at al-Ramleh Prison Clinic. The following day he was informed that he is in quarantine and will spend eight days at al-Ramleh Prison Clinic since his isolation already started while he was al Petah Tikva interrogation center. Qais reported that his detention conditions at al-Ramleh were inadequate especially in regards to the quality and quantity of the provided meals. He also reported that his body temperature was taken regularly. After eight days, Qais was transferred to Ofer prison, section 14, and spent there six days before being transferred again to isolation at Ayala prison. Qais was one of nine prisoners who were transferred to isolation as quarantine after direct interaction with a Palestinian prisoner who stayed at the same section at Ofer prison and tested positive for the corona-virus one day after his release. As for Qais, he only spent four days in isolation at Ayala prison, as he was actually released after s court session. No medical tests were made for him during his time in isolation.

[3] By the end of this stage each prisoner has to have personal space of three meters without the bathrooms.

[4] By the end of this stage each prisoner has to have personal space of four meters without the bathrooms and four and a half meters with bathroom space.