Behind a Firewall: Repercussions of the PA ‘Electronic Crimes Law’ 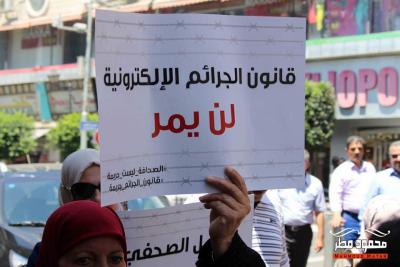 Behind a Firewall: Repercussions of the PA ‘Electronic Crimes Law’

On 24 June 2017, the President of the Palestinian Authority, Mahmoud Abbas, issued a presidential decree entitled the ‘Electronic Crimes Law’. The decree itself is extensive and covers all possible crimes that can be committed using any type of information technology.

Under Article 43 of the Basic Law of 2002, which was amended in 2003, the Palestinian Authority President can issue a decree in a time of necessity, if the situation is urgent enough as to not be able to wait until the next sitting of the Palestinian Legislative Council. Mahmoud Abbas has been ruling solely in this way since the dissolution of the elected government in 2007.

Despite there being a kernel of truth to the claim that the decree was necessary to close loopholes available to hackers and fraudsters, it by no means represents a ‘necessity’ as stipulated in the Basic Law. Within the document, rules governing different aspects of ‘electronic activity’ have been combined in order to provide a cover. Legitimate restrictions on internet fraud have been put in one article, while the next limits what individuals can post, share, or publish. The decree represents a serious curtail on privacy, and freedom of expression.

The most troubling aspects of this document are its vague definitions of what constitutes a punishable offence, its extension of punishment to any individual who assists or agrees with what the decree considers a felony, and the clear attacks on dissenters, journalists and leakers. The combination of the three means that an ever increasingly authoritarian regime has the legal backing necessary to effectively crackdown on any form of digital dissent.

According to Article 4, “any person who…has abused any information technology…shall be liable to either imprisonment, a fine between two hundred and one thousand Jordanian dinars, or a combination of the two.” The same article continues to state that, if the abuse or access in question affects governmental data, the sentence shall be “a minimum of five years of temporary hard labour and…a fine of no less than five thousand Jordanian dinars [$7070 USD]…”

The ‘abuse’ in question is not defined and open to interpretation by the authorities. Though the clause referring to governmental data is clearly aimed at leakers or journalists, who will be severely punished for participating in the disclosure of governmental information.

Article 15 states that, in regard to the use of the internet or an information technology, “if a person threatens to commit a felony or an immoral act, they shall be punished by temporary hard labor…”. Again, the definition of an ‘immoral act’ is up to the discretion of the authorities and a felony can constitute any act detailed within this Presidential decree, or any other.

Article 16 is similar in its intent, but involves a broader definition. According to it: [A]nyone who has produced any material that infringes upon public morals…or [presents] it to others through an electronic network, an information technology platform, or an animation shall be punished for a period of no less than one year or by a fine of no less than one thousand Jordanian dinars no more than five thousand Jordanian dinars [$7070 USD] or both penalties.

Regarding freedom of the press, the most threatening section is Article 20. It declares that, “anyone who creates or manages a website or an information technology platform that aims to publish news that would endanger the integrity of the Palestinian state, the public order or the internal or external security of the State shall be punished…” with a fine between one thousand dinar [$1414  USD] and five thousand dinar [$7070 USD], at least a year of jail time, or both.

Further to this, the second section of the Article states that “any person who propagates the kinds of news mentioned above by any means…shall be sentenced to a maximum of one year in prison or be required to pay a fine of no less than two hundred Jordanian dinar [$283 USD] and no more than one thousand dinars [$1414 USD] or be subjected to both penalties.”

This means that not only is the writer, or publisher of the news liable to be punished, something as simple as a share on Facebook could result in a fine, jail time, or both. The decree even goes as far as to criminalise the use of any means to bypass the blocking of certain websites, such as a VPN. Article 31 mandates a minimum sentence of three months or a fine of between five hundred ($707 USD) and a thousand dinar ($1414 USD).

In addition to these articles, the decree also asserts that website providers must comply with the blocking of certain websites, the PA has the right to seize equipment it believes has been involved in felonies as detailed in the decree, and the PA is able to monitor any individual’s communications and data for a renewable period of 15 days as approved by the Magistrate’s Court.

All of the above is compounded by Article 51, which states that “[i]f any of these offences are committed for the purpose of disturbing public order...or with the intention of harming national unity...the penalty shall be hard labour or temporary hard labour.”

In essence, besides the infringement on freedom of the press, the PA can now imprison and fine individuals for a Facebook share, watching Game of Thrones using a VPN, making an ‘offensive’ meme, posting a tweet against certain policies, or asserting political allegiances.

Utilisation of the Law:

Thus far, there have been two known incidences of the decree being utilised to curb press freedom, and freedom of expression. In addition, over the same time period, there has been an additional incident of the PA curtailing freedom of the press.

The initial incidence was the arrest of Jihad Barakat, a journalist with Palestine Today TV, which occurred on 6/07/2017. Hours after filming Israeli soldiers searching the convoy of PA Prime Minister Rami Hamdallah, in contrary to agreed protocol between the Israelis and PA, he was arrested by PA security forces. He was not charged under the law but for a range of offenses, including panhandling, for which he will stand trial in the PA court system in September.

The second involves the blocking of websites. Since 15/07/2017 to the middle of August, 30 websites have been blocked from being accessed by West Bank IP addresses. Despite the fact that pages associated with ISIL have been part of the blocked sites, the majority of them have been news sites associated with Hamas, and the exiled Fatah Member Mahmoud Dahlan.

The fact that these websites are run by political rivals to the current ruling faction of the PA indicates that that these laws are being and, will continue to be used, to stifle free speech, legitimate dissent, and discussions regarding the state of politics in Palestine.

Such affronts to the freedom of the press were escalated with the arrest of five journalists, accused of ‘leaking information to hostile entities’, and the questioning of four others in relation to social media posts critical of PA policy. Of the arrested journalists, three work for al-Quds TV, one works for al-Aqsa TV, and the fifth is a freelance journalist.

Despite initial claims that these detainments had nothing to do with the new decree, the prosecutor later cited the order as part of the reason for their arrest.

The journalists ended up being held for five days and were made to agree to a thousand Jordanian dinar bond, the amount stipulated in the decree. It is unclear if charges will be further pursued but, at this point, none have been officially issued.

Under Article 19 of the ICCPR, the Palestinian Authority commits to honour and ensure individuals’ right to freedom of opinion, expression, and the receiving and imparting of information in all forms. These rights are only limited if they impinge on the right of another, or for the protection of “national security or of public order... or of public health or morals.”

Despite the ‘Electronic Crimes Law’ using the language of ‘national security’, the decree itself is clearly contrary to the spirit of the ICCPR. The fact that the limits on free speech have been applied to opposition voices, and critical journalists, is more than enough to conclude that the PA is currently in violation of their international commitments.

Addameer confirms that the PA is therefore legally bound to respect and fulfill the right to freedom of expression as stated in Article 19 of the ICCPR. The PA must also guarantee that any of its laws attempting to criminalize or otherwise regulate using any type of information technology complies with its international obligations. Furthermore, Addameer urges that the Palestinian Authority must abide by the conventions to which it is a party, especially considering the ongoing deteriorating human rights situation in the occupied Palestinian territories.