Will Hassan Mizher Wake up from his Coma? A Question to the Israeli Prison Service 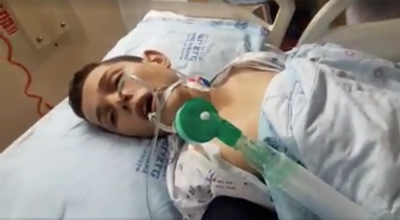 Hassan Mizher’s 18th birthday took place one month before he was arrested by the Israeli occupation forces, on 7 April 2018. Since then, Hassan has been detained in Ofer awaiting trial. The main charge is stone throwing.

From birth, Hassan has had a serious medical condition which mainly affects his liver and kidneys as a result of an inability to absorb proteins. Therefore, he lives on a strict vegetarian diet which does not include any kind of proteins. He also has to constantly take several kinds of supplements and medicines such as Flagyl, Carnitine, and B12.

According to Hassan’s father, since his arrest, Hassan was not provided with any medication, or with means to stay on his strict vegetarian diet. His condition worsened and, yesterday, 28 May 2018 he was transferred from Ofer’s clinic to Shaare Zedek hospital. Hassan was only transferred after four days of vomiting, and having slipped into a coma.

Currently, Hassan’s parents are with him in the hospital and the doctors are informing them that Hassan’s condition is severe. Hassan’s father informed Addameer’s researcher that “the Israeli occupation forces bear full responsibility for Hassan’s current medical condition. My son was supposed to be transferred to a hospital when he started throwing up. The cause of his coma is the fact that he was not provided with any medical service in detention.”

Article 76 of the Fourth Geneva Convention states that prisoners and detainees should enjoy conditions of food and hygiene sufficient to maintaining good health, which should be “at least equal to those obtaining in prisons in the occupied country.” Regarding medical attention and inspections, articles 91 and 92 of the Fourth Geneva Convention emphasize that every place of internment shall have an adequate infirmary, under the direction of a qualified doctor, where detainees may have the attention they require, in addition to medical inspections of internees shall be made at least once a month, whose purpose is to supervise the general state of health, nutrition of internees, and to detect contagious diseases.

The Israeli Prison Service (IPS) has adopted a policy of deliberate medical neglect against prisoners and detainees. Human rights organizations estimate that since the beginning of the occupation around 75 prisoners have died because of medical negligence. Addameer calls for third-party states to act immediately to force the Israeli occupation forces to comply with international humanitarian laws, and to work towards holding Israel accountable for its crimes.

The suffering of the Palestinian people deserves an international response.