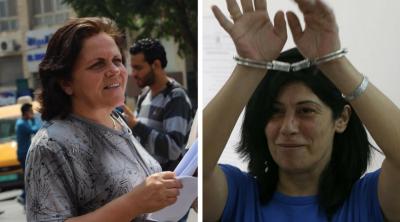 According to Addmaeer’s attorney, Jarrar and Saafin were arrested by Israeli occupation forces, who invaded their family homes in Ramallah city, in pre-dawn raids on 2 July 2017. Later, the two were taken to a detention center in Ofer prison for interrogation. Both were only interrogated for 30 minutes before being placed in a small prison cell with no windows for four hours. By 4:00 pm on the same day, the two were transferred to HaSharon prison, one of the two prisons where dozens of Palestinian women are held.

On 9 July 2017, Ms. Saafin was issued a three-month administrative detention, without charge or trial. On 12 July 2017, Ms. Khalida Jarrar was issued a six-month administrative order. Ms Saafin and Jarrar’s trials are both based on secret evidence. Therefore, their legal representatives are unable to fully address the prosecution’s argument, which asserts that Ms. Jarrar and Saafin pose a security threat.

Mrs. Khalida Jarrar is a Palestinian Legislative Council (PLC) member and a member of the Board of Directors of Addameer. She has been the head of the Prisoners Commission of the PLC since 2006, and was appointed to the Palestinian National Committee for the follow-up of the International Criminal Court. Jarrar has been targeted by Israeli forces in recent years. She was released from prison in June 2016 after serving over a year in prison, including one-month under administrative detention.

With direct relevance to Ms Jarrar and Saafin’s human rights advocacy work, the United Nations Declaration on Human Rights Defenders expressly states at Article 9(3)(c): “everyone has the right, individually or in association with others to... offer and provide professionally qualified legal assistance or other relevant advice and assistance in defending human rights and fundamental freedoms”; and, at Article 12: “Everyone has the right, individually and in association with others, to participate in peaceful activities against violations of human rights and fundamental freedoms”.

Addameer believes that Jarrar and Saafin are being illegitimately targeted and punished by Israeli occupation authorities as a result of their significant work promoting and protecting the human rights of Palestinian political prisoners, especially during the 41-day mass hunger strike that was launched by Palestinian political prisoners on 17 April 2017. Furthermore, the continued targeting of Palestinian legislative council members as well as civil society leaders must be viewed in a broader context of systematic attempts by the Israeli occupation to suppress Palestinian civil society, which attempts to hold Israel accountable for the crimes committed against Palestinians. Evidence of this repression can be seen in the increasing number of Palestinian legislative council members (currently 11 in prison), human rights defenders and civil society leaders, who are being arrested by Israeli occupation forces on a daily basis.

The arrest and detention of Jarrar and Saafin amount to an illegitimate and grave interference with a range of fundamental rights under international human rights law, including:

a. Right to liberty and security of person under international human rights law (Article 9 of the International Covenant on Civil and Political Rights (ICCPR));

b. Right to a fair and public hearing under international human rights law (Article 14, ICCPR);

c. Right not to be subjected to arbitrary interference to family and home life under international human rights law (Article 17, ICCPR);

d. Right to hold opinions without interference and right to freedom of expression under international human rights law (Article 19, ICCPR);

f. Right to be equal before the law and to be free from discrimination under international human rights law (Article 26, ICCPR);

Given the context of Ms Jarrar and Saafin’s peaceful and lawful work to promote, protect and realize human rights and fundamental freedoms in accordance with international human rights law guarantees, particularly in respect to political prisoners, we urgently ask you to take the following actions: