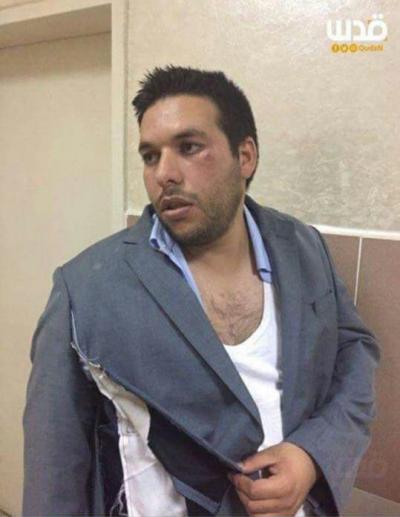 The Palestinian Human Rights Organizations Council (PHROC) strongly condemns the beating of Addameer Prisoners Support attorney Muhannad Karajeh as well as other Palestinian civilians at the hands of Palestinian Security Forces dressed up in civilian clothing on Tuesday, 4 October 2016. Mr. Karajeh, among other Palestinians, was participating in a peaceful demonstration in Ramallah when the incident took place.

According to testimonies obtained by member organization of PHROC: At approximately 4:00 pm, on Tuesday, a number of young men and women gathered next to Yasser Arafat Square in Ramallah/West Bank, to participate in a demonstration to commemorate Palestinian martyrs and to protest the participation of President Mahmoud Abbas in the funeral of former president of the occupying state, "Shimon Peres." At the same time, another demonstration in support of President Mahmoud Abbas was taking place. The demonstration was led by security agents dressed up in civilian clothing, who began attacking, beating and cursing the young men and women. Addameer’s attorney Muhannad Karajeh, who was present at the demonstration among other colleagues from Addameer, attempted to prevent the Security Forces from attacking the demonstrators. Despite identifying him, the security agents immediately started assaulting and brutality beating him, resulting in his transfer to a Palestine Medical Complex for treatment.

PHROC expresses its utmost concern regarding the brutal actions of the Palestinian Security Forces personnel, whose main duties are to provide protection for Palestinian civilians and to ensure law enforcement. Nevertheless, the security forces, who were dressed up in civilian clothing, did not only fail to fulfill their duties, but rather outrageously attacked and suppressed the demonstrators, who were only expressing their opinions nonviolently. This Confirms that:

1- The right to peaceful assembly is an inherent human right guaranteed in Palestinian law and international human rights conventions, especially Public Meetings Law No. (12) of 1998, which provides special protection measures, and responsibilities of the PA to ensure the rights of citizens to organize public meetings freely .

2. In accordance with Articles 19 and 27 of the Palestinian Basic Law, citizens, press and media have the right to express their opinions freely, which is also a right guaranteed by the International Covenant on Civil and Political Rights.

3. The attack on the public rights and freedoms is a constitutional crime described in Article 32 of the Palestinian Basic Law, which requires accountability and justice to those affected.

4. The Palestinian Authority must comply with the conventions to which it is a party, especially the International Covenant on Civil and Political Rights, considering the ongoing deteriorating human rights situation in the occupied Palestinian territories, which included incidents of extrajudicial executions, arbitrary arrests, violations of the right to freedom of opinion and expression, and violation of the right to peaceful assembly.

1. Demands the PA to open an immediate and impartial investigation into these attacks; to bring the perpetrators to justice; and to disseminate the results of the investigation to the local public. PHROC further demands that the PA must take effective measures to avoid that similar attacks are repeated in the future.

2. Warns of the consequences of the lack of accountability and effective remedies in the face of human rights violations in the Palestinian territory, and holds the PA accountable for any delay or failure to prosecute the perpetrators and bring them to justice.

3. Emphasizes that strengthening the respect of public rights, freedoms and human dignity, must be a priority for the PA and one of the most important foundations of promoting stability and consecration of freedom, justice and human rights values within the Palestinians society, which is subjected to grave systematic violations of international humanitarian law and international human rights law  at the hands of Israeli occupation authorities.

4. This statement is considered as a notice directed to the Palestinian Attorney General to start a lawsuit to preserve public interest regarding the attack against Addameer’s attorney and other Palestinian civilians and to bring the perpetrators to justice.