Israeli Occupation forces continue to withhold the bodies of deceased Palestinians, and renege on conditions of release 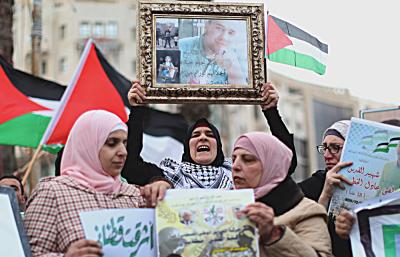 Ramallah – 01/03/2016 – Addameer Prisoner Support and Human Rights Association and Adalah – The Legal Center for Arab Minority Rights in Israel condemn the Israeli government’s continued withholding of the bodies of nine Palestinians, many of who were extra-judicially executed by Israeli forces for alleged attacks against Israelis, despite posing no danger.  Further, the Israeli authorities breached their agreement with the family of Mosab Al Ghazali (26 years old) from East Jerusalem, when returning his body at dawn yesterday, 29 February 2016. These practices violate the right to dignity of the deceased and of his family, and exemplify the continued policy of collective punishment. Extra-judicial executions and the withholding of the bodies of the deceased violate both domestic and international law.

Addameer Attorney in Jerusalem Mohammad Mahmoud stated that at dawn yesterday, the Israeli occupation forces breached conditions of the release of the body of Mosab Al Ghazali. According to the agreement, the body would be returned near the entrance of the Al-Asbat Grave with the presence of only 30 people, the family would post a bond of NIS 30,000 (about EUR 7,060), which they would lose if they breached the agreement, and the body would be returned after its removal from the freezer, with sufficient time prior, to allow for the burial of a body that is not frozen. However, the Israeli authorities reneged on the agreementin that, the body was returned frozen, and a new condition was placed on the release at the moment of the return of the body: The authorities demanded to confiscate the cellular devices of all of those present until the end of the burial. The occupation forces emphasized that they would not release the body if the family did not abide to this new condition.

The Israeli authorities also reneged on a prior 9 February 2016 decision to release Mosab Al Ghazali’s body, after having announced the release to his family. Addameer Attorney Mohammad Mahmoud stated that at the time, the authorities informed the family about the postponement,however, they did not give any reasons for the delay or set a new date.

Addameer and Adalahview the continued withholding of the bodies of nine deceased Palestinians, the longest of which has been held by Israel for over four months, as a severe violation of international humanitarian law as well as international human rights law including violations of the right to dignity, freedom of religion, and the right to practice culture. The withholding of the bodies also greatly adds to the grief, anxiety and trauma of the families who are dealing with the loss of a loved one, and who are also being denied their cultural and religious rights to mourn and to bury them in accordance with their faith.

The practice of withholding bodies also obstructs the possibility of conducting an investigation concerning the circumstances of the alleged extrajudicial executions and a proper autopsy.

Addameer and Adalah call for the opening of investigations into the circumstances of the executions of Palestinian adults and children in recent months. Addameer and Adalah have previously called for autopsies to be conducted in specific cases, which were refused by the police and in the courts. The Israeli authorities have also repeatedly denied requests to open investigations.

Addameer and Adalahurge the United Nations, the International Committee of the Red Cross, and the European Union to intervene and pressure the Israeli authorities to immediately release the bodies of Palestinians that are still being withheld. They should be released without conditions, and investigations must be opened concerning the circumstances of these possible extrajudicial executions.

Israeli forces killed Mosab Al Ghazali near Bab Al Khalil in West Jerusalem on 26 December 2016. They claim that Al Ghazaliattempted to stab another individual, however, no one was injured or killed other than Al Ghazali in this incident.