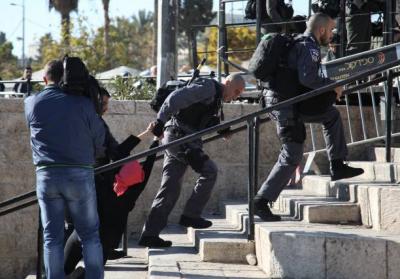 The occupying force continues with a concerted campaign of arrests, which intensified immediately after President Trump’s announcement regarding Jerusalem on 6 December. Friday 15 December 2017 witnessed several protests organized by Palestinians which were all repressed by Israeli occupation forces through extra used of force and unrest arrest campaign during the protests and after them. In fact, only between Thursday evening 14 December and early hours of Sunday 17 December, Israeli occupation forces arrested around 59 Palestinians from different areas in the West Bank and East Jerusalem. Those detainees included two women, 8 children, a journalist and a lawyer. Furthermore, the arrest campaign is widespread and include several arrest mechanisms, some of the detainees are arrested during protests, some on checkpoints and others from their homes.

·         East Jerusalem: In the past few days Israeli occupation forces have arrested 26 Palestinians including two women and four children. Thursday evening soldiers arrested the two women, Refqa Qawasmi and Rihana Odeh, from Damascus Gate during a peaceful protest against Trump’s decision. Also, in the morning of Saturday 16 December, Israeli occupation forces arrested the four children, 16-year-old Sultan Ashour, 15-year-old Mahmoud Taha, 14-year old Muhammad Hamadeh and 16-year-old Adnan Siyam from the Old City of Jerusalem. Some of those detainees, including the two women, were given extension detention hearings until 18 December 2017.

·         Ramallah: The number of detainees from Ramallah reached 8 in the past few days. Two of those detainees were arrested from protests near Bait El checkpoint, one on Thursday 14 December, Mohammad Abu Ali from Jenin and the other on Friday 15 December, the 15-year-old Mutassem Hammas.

·         Hebron: The record shows that 9 Palestinians from Hebron were detained in the past few days, they were arrested during protests in the city and around it. On Friday 15 December, Israeli occupation forces arrested the journalist Bilal al-Tawel when he was covering the protest in the old city of Hebron. Israeli occupation forces also arrested several young men like Mu’ayad Abu Shanab and Muhannad Jaradat, they also arrested the lawyer Firas Ameen A’qel this morning.

·         Jenin: There are 5 detainees from Jenin only in the past days and they include two children. On Friday 15 December Israeli occupation forces arrest 13-year-old Abed al-Kareem Yassien and 15-year-old Muhammad Lutfi Melhem from A’aneen village. In addition to this, Saturday Evening 16 December, forces arrested three other protected persons, two of them were arrested on al-Jalama checkpoint.

·         Qalqilya: The young man Sami A’qel from Kufr Qaddum was arrested on a sudden flying checkpoint.

·         Tulkarm: The number of detainees from Tulkarm reached two and they were arrested on Friday 15 December during a protest near a Gate on the Apartheid Wall in Qefeen village.

In past few days, they intensified their attack on Palestinians and on their objects specifically university campuses. Israeli occupation forces in the past two weeks have increased the use of extra force against Palestinian protected civilians. Furthermore, these mass arrest and harassment campaigns are part of Israeli’s collective punishment measures that are in direct violation of Article 33 of the Fourth Geneva Convention and Article 50 of the Hague Regulations which specifically prohibits collective punishment. Those measures are widespread and systematic and they target all Palestinians, whether men, women, children, or disabled persons. The records have proven an excessive use of force against Palestinians and unlawful extrajudicial killings, especially the killing of the disabled person Ibrahim Abu Therya from Gaza. According to international law, lethal force can only be used as a measure of last resort, and it must always be proportional and necessary. In the cases of the 11 Palestinian martyrs and 3000 injured persons, there was no proportionality or military necessity that would allow this use of force.[1]

As such, Addameer calls on the immediate release of all prisoners. In addition, we call on third state parties to immediately pressure the Israeli occupation authorities to respect their obligations under international humanitarian law and international human rights law. Most importantly, to allow Palestinians to practice their right in participating in peaceful protests and immediately stop this wave of violent excessive use of force against Palestinians.

[1] Basic Principles on the Use of Force and Firearms by Law Enforcement Officials, Eighth UN Congress on Prevention of Crime and Treatment of Offenders, Havana, Cuba, 27 August- 27 September 1990, General Provision No. 9.