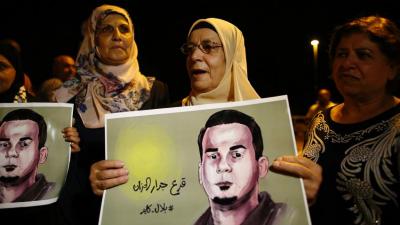 Mr. Kayed was initially informed on the day of his administrative release. During this hearing, the court did not investigate the credibility of secret information provided to them by the police and discussions of the nature of the secret information took place inside a closed hearing session (where only the intelligence service (shabak), the judge, and the prosecution were allowed to attend). The lack of access by defendants to such information stands counter to the need for a fair trial. In its 2016 concluding observations, the UN Committee Against Torture recommended that Israel, “urgently take the measures necessary to end the practice of administrative detention”.

The court’s reaction to regarding the continued shackling of and the request for visitation by an independent doctor were particularly problematic. The court’s continued assumption that Mr. Kayed may escape and the need to continue shackling him is contrary to the realities of his confinement and medical condition and amounts to cruel and degrading treatment.

Regarding an independent doctor’s visit, the court claimed that as Mr. Kayed is a hunger striker whose medical journey and it’s health consequences health-wise are understood and known, Mr. Kayed does not need a second medical opinion by an independent doctor, since he is treated by expert doctors in the hospital. Such a statement has the power of creating a dangerous precedent by denying the right of hunger strikers in general for a second medical opinion by an independent doctor. It also stands counter to the Israeli Patient’s Rights Law declaration of Malta and international ethical codes.

In a visit to Barzilai medical center yesterday (21 August 2016) by Addameer attorney Farah Bayadsi, Mr. Kayed stated that he still refuses to undertake medical examinations and is only consuming water and salt. Mr. Kayed was transferred to the Intensive Care Unit on Friday (19 August 2016) due to his refusal to take any vitamins or food supplements, particularly sugar and Vitamin B1. Mr. Kayed suffers from blurred vision, difficulty breathing, difficulty in movement, severe pain in the chest, lower back, jaw, and kidney area pain. Mr. Kayed also suffers from difficulty sleeping, drowsiness, and fatigue. Despite his critical health condition, Mr. Kayed stated to attorney Bayadsi that he will continue his hunger strike until his release.

A second hearing regarding Mr. Kayed’s administrative detention is scheduled  for Thursday, 25 August 2016. With respect to his shackling and the doctor visit, the court has declared that a decision will be delivered in a few day. The court requested further clarification regarding the reasons for Mr. Kayed’s administrative detention from the shabak and a  recent medical report addressing Mr. Kayed’s current health condition.

Addameer and PHRI are greatly concerned by the delays in the court’s decision considering Mr. Kayed’s deteriorating health condition. We call on international organizations, including the United Nations, the International Committee of the Red Cross, the European Union, and all High Contracting Parties to the Fourth Geneva Convention to fulfill their obligations towards protecting human rights and enforce the implementation of international humanitarian law, especially when grave breaches are being perpetrated. We call on the aforementioned actors to push the Israeli government to immediately release Mr. Kayed and pressure Israel to end the use of administrative detention.