Bone of their Bone: Torture and Ill-Treatment by Palestinian Security Forces 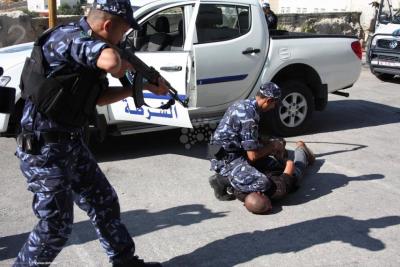 Bone of their Bone: Torture and Ill-Treatment by Palestinian Security Forces

On the occasion of International Day in Support of Victims of Torture, Addameer calls for an end to all practices by the Palestinian Authority that amount to torture and other Cruel, Inhuman or Degrading Treatment. In 2014, the Palestinian government signed and ratified several international conventions on the protection of human rights, including the Convention Against Torture and other Cruel, Inhuman or Degrading Treatment (CAT). Thus, the Palestinian Authority became responsible for  fulfilling its obligations under the convention by taking “effective legislative, administrative, judicial or other measures to prevent acts of torture in any territory under its jurisdiction” in accordance with the Convention.[1]

In 2015-2016, Addameer has documented continued cases of arbitrary detention, torture, and ill-treatment during arrest as well as in Palestinian prisons, detention and intelligence centers. These practices are in contravention with the International Covenant on Civil and Political Rights (ICCPR) as well as the Convention Against Torture, both of which the Palestinian Authority is a party. The arrests have targeted university professors, students, journalists, teachers (teacher’s strike in February 2016) and civil society activists. The Palestinian authority’s ratification of several key international human rights treaties in 2014 was welcomed by Addameer and other civil society and nongovernmental organizations, as a mechanism for accountability and strengthening human rights protection on the ground. However, in recent years the Palestinian authority has displayed an alarming lack of commitment and political will to implement the provisions of the Convention Against Torture. Thus, the Palestinian human rights situation of Palestinian prisoners and detainees has deteriorated despite the accession to the treaty.

One account from a student who was arrested by Palestinian Intelligence forces and detained by Preventative Security Forces on 08 March 2015 exemplified the targeting and ill-treatment of students with differing political opinions, which contravene these conventions:

“At approximately 10.30 PM the interrogation started… When I refused to give any information, he took the chair that I was sitting on and made me stand, and the interrogation continued while I was standing on my feet until 7.00 AM without food, water, or allowing me to sleep. And after 7.00 AM they took me to the cell which was very small, the size of a mattress. It had a mattress and a light blanket. It was very dirty and cold and I asked them for a thicker blanket and they refused. The cell had only one small window and there was no toilet.”

Another detainee who was arrested on 29 July 2015 by Palestinian Intelligence Forces recounted:

Another account by a student in Ramallah who was arrested in 2015 (affidavit taken on 18 November 2015) described:

“A Palestinian police officer brought to me a piece of paper that had a facebook post of mine on it, which was critical of the Palestinian Authority. They asked me to read it. I read the paper and then they started hitting me in a barbaric way – as if they were in a brawl. They hit me in different ways: kickings, beatings, punching all other the body, but especially on my back. This lasted for about 45 minutes… I was beaten by more than six police officers and they were constantly insulting me verbally. After they finished, they asked me to put my face against the wall and to raise one of my legs (shabah). They asked me not to move and not to touch the wall… When I was standing some police officers would come into the room and start hitting and insulting me.”

On 01 June 2016 a Palestinian journalist and resident of Birzeit was arrested by Palestinian intelligence. He gave the following account of his experience:

“At approximately 9.30 PM while I was leaving my house in Birzeit, two cars with Palestinian license plates, one of which was a rental and the other was a regular car, tried to pass me in driving and suddenly I heard the sound of gunshots. I stopped because they were shooting and screaming at me. 4-5 intelligence personnel in civilian clothing attacked my car. They forced me to step outside the car. They started shouting at me and they forced me to get in their car without even telling me who they were. While they were taking me, one of them pressed very hard on my neck until we reached the Intelligence Centre in Ramallah… Interrogation started at approximately 10.30 PM. My hands were cuffed behind my back. I was blindfolded and the interrogation lasted for six hours while I was standing. Most of the questions were about the nature of my work as a journalist and they were threatening to put me in prison for a long period of time… One of the interrogators said to me, “you will rot here”…

The detainee furthermore described his medical negligence and assault despite his chronic health condition:

“I told them I had heart problems so they did medical examinations and the doctor recommended that I should go to the Ramallah hospital and there the doctor said to the intelligence forces that I should stay under observation but they refused and half an hour later they took me out of the hospital and one of the intelligence forces pushed me roughly and caused me to fall to the floor of the car which was very painful and I had already been feeling dizzy and unbalanced. They began to hit my on the head with their hands and pushing me on the chair of the car.”

Furthermore, these acts of torture and ill-treatment contravene Article 13 of the Palestinian Basic Law, which states that prisoners and detainees should be treated properly and should not be subjected to torture or ill-treatment. The violations of this law are crimes that necessitate accountability for perpetrators and remedies for victims. Thus, the Palestinian authority and its security and intelligence personnel must abide by the provisions of national legislation and those of the Convention Against Torture.

Addameer further underlines that, “No exceptional circumstances whatsoever, whether a state of war or a threat of war, internal political instability or any other public emergency, may be invoked as a justification of torture.”[2]

Addameer considers the actions of the Palestinian Security Forces to be in contravention with the Convention Against Torture and other international human rights treaties. These treaties prohibit the use of torture and ill-treatment against detainees and affirm the right of individuals to fair trial guarantees. Addameer condemns the use of torture and ill-treatment under any circumstances and considers this to be a non-derogable prohibition, to which individuals must be held accountable.

Addameer holds that the Palestinian Authority must comply with the conventions to which it is a party, especially considering the ongoing deteriorating human rights situation in the occupied Palestinian territories. Addameer further calls upon the Palestinian government to sign and ratify the Optional Protocol to the Convention Against Torture (entered into force on 22 June 2006).  Addameer also calls upon the Palestinian Authority to define the crime of torture in its criminal code as it is defined by the Convention and to guarantee accountability for perpetrators of torture in its legislation.