ARREST AND DETENTION OF PALESTINIAN WOMEN AND GIRLS 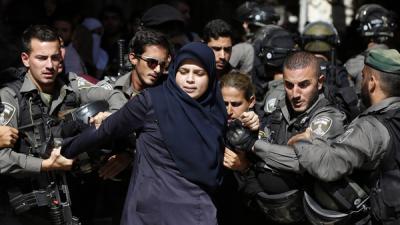 In this International Women’s Day, there are 62 Palestinian females held in Israeli prisons and detention centers, including 6 female children, 9 injured prisoners and 3 administrative detainees held without charge or trial. In total, 35 are held in HaSharon Prison and 25 are held in Damon Prison. Both of these prisons are located inside Israel in contravention of the Fourth Geneva Convention which prohibits the transfer of the population from the occupied territory to the territory of the occupier.

Since the beginning of the occupation 50 years ago in 1967, over 10,000 Palestinian women have been arrested and detained by Israeli occupation forces. In 2018, Palestinian women and girls are routinely arrested from the streets, Israeli military checkpoints, and during violent night raids on their homes. Those military incursions are accompanied with the presence of Israeli soldiers, intelligence officers, and police dogs, during which destruction of household items and property damage takes place. They are blindfolded and handcuffed, and they are forcibly taken to a military jeep.

R. L., a 17-year-old girl from the city of Jerusalem, was arrested on 5 February 2016 from the street. During the arrest, the Israeli soldiers harshly beat her and transferred to al-Mascobiyya for interrogation. Throughout the transfer, she was handcuffed and eyes folded, she was also humiliated, insulted and beaten by the soldiers. R. L. did not know where she was going neither her parents did. As for interrogations, she was interrogated for three days and by three Israeli officers without her lawyer, also her hands and legs were cuffed. She was tortured during interrogations; put in stress positions, beaten and deprived of sleep and food. R. L. was accused of possessing a knife, however, she was released on bail after four days of the detention. Her release was conditional, so her family had to pay 2500 Skekels (around 750 USD), and she was forcibly transferred to another village in Jerusalem but is far away from her parent’s house. Then, she was placed under house arrest until she was sentenced to 14 months of imprisonment. In fact, since 5 February 2018 R. L. has been detained in Hasharon prison along with another 5 female minors. After an appeal her sentence got reduced to 8 months instead of 14, so R. L. is expected to get released in October 2018.

32-year-old L. Sh. is an administrative detainee, she was arrested in October 2017. L. Sh, is a mother of 6 the youngest is currently three years old. She was taken from her own house after a raid from the Israeli occupation soldiers who strip-searched her before arresting her. Since she is under administrative detention that means she does not know her charges neither does her lawyer. Still, L. Sh. was interrogated for days. She reported:

“During interrogations, I was surprised when the officer was asking me about an operation I’m planning to commit. The officers kept telling me that they know about a dream I had which was about me committing an operation against them. One time they even told me they know about the dream and about the fact that I told my neighbors about it. I didn’t know what to say so I asked them to let me sleep maybe I’ll have another dream which might have the answers they want.”[1]

Palestinian girls and women in Israeli detention centers are deprived of their right to education. In fact, female minors are not provided with any school classes in detention, which is in direct violation of international laws and standards. Thus, being a young Palestinian female detained in Israeli prisons it means you will end up being late in school, if not eventually dropping out. Currently, there are 6 female minors detained, most of them are supposed to do their official high school exams at the end of the educational year. However, those young girls are not provided with any educational services by the Israeli Prison Service (IPS) to prepare them for those exams. Nevertheless, since those young girls are detained in the same detention centers as adult women, PLC member Khalida Jarar has been preparing those girls for the exams.

“Greetings to all Palestinian women and women from the entire world. On this International Women’s Day, I assure the importance of unity among women in their national and social struggles against colonization, discrimination and social exploitation. 8th of March is an opportunity for unity among us to fight for justice.”[2]

Israel is accountable for its actions in the occupied territories, including West Bank military checkpoints, particularly the ill-treatment of women during arrests and transfers. Article 12 of General Recommendation 28 by the Committee on the Elimination of Discrimination against Women on the Core Obligations of States Parties states that:

“Although subject to international law, States primarily exercise territorial jurisdiction. The obligations of States parties apply, however, without discrimination both to citizens and non-citizens, including refugees, asylum-seekers, migrant workers and stateless persons, within their territory or effective control, even if not situated within the territory. States parties are responsible for all their actions affecting human rights, regardless of whether the affected persons are in their territory.”[3]

In its General Recommendation No. 30 on women in conflict prevention, conflict, and post-conflict situations, the Committee confirm the aforementioned paragraph, stating, “… the obligations of States parties also apply extraterritorially to persons within their effective control, even if not situated within their territory, and that States parties are responsible for all their actions affecting human rights, regardless of whether the affected persons are in their territory”.[4]

Testimonies by Palestinian women and girls highlight the brutality of the arrest process as well as conditions inside Israeli interrogation, detention and prison centers, and even hospitals while in custody. The abuse, ill-treatment, and torture of Palestinian women and girls take place within the context of the ongoing occupation of 50 years and annexation of Palestinian lands. In the Convention on the Elimination of all Forms of Discrimination against women, States Parties emphasize “that the eradication of apartheid, all forms of racism, racial discrimination, colonialism, neo-colonialism, aggression, foreign occupation and domination and interference in the internal affairs of States is essential to the full enjoyment of the rights of men and women”.[5]

·         States Parties to the Fourth Geneva Convention call for an end to physical and psychological abuse in the hands of soldiers during the arrests of Palestinian women and girls and their illegal detention in occupying territory, accountability.

[4] UN Committee on the Elimination of Discrimination Against Women (CEDAW), General recommendation No. 30 on women in conflict prevention, conflict and post-conflict situations, 1 November 2013, CEDAW/C/GC/30, paragraph 8.