500 Palestinian Detainees since Trump's Declaration on Jerusalem, Including Around 85 Detainees in less than a Week 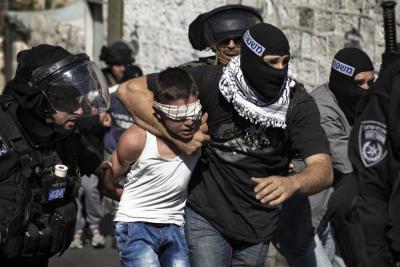 The Israeli occupation forces continue with this violent and intensifying arrest campaign since Tump’s declaration on Jerusalem on 6 December 2017, since then around 500 Palestinians have been detained. In fact, since the early hours of Monday 18 December 2017 until the early hours of Thursday 21 December 2017, the Israeli occupation forces have arrested around 85 Palestinians from different areas in the West Bank and Jerusalem. Some of these arrests happened during protests against the occupation forces in several places, other arrests were implemented on checkpoints and finally, some of the arrests occurred late at night during a raid on Palestinian homes. Those few past days included the following arrests, but not limited to them:

·         Jerusalem: The number of detainees from Jerusalem reached 16 Palestinian including one child and some human rights activists. On 18 December 2017, Israeli occupation forces arrested 14-year-old Ahmad Salaymah. Furthermore, Wednesday morning, 20 December 2017, the human rights activist Amjad Abu A’ssab who is the head of the Families of Prisoners Committee, was arrested along with the other activist A’wad Salaymah. Most of those who got arrested from Jerusalem received conditional release, Amjad Abu A’ssab was released yesterday, though, he is now placed under house arrest, had to pay 1000 Shekels bail and is prevented to use his phone until Sunday 24 December 2017.

·         Ramallah: In the past days the number of detainees from Ramallah was 20 Palestinians including two young girls, one woman, and four children. For example, 14-year-old Ahmad Daraghmah was arrested during a protest near Bait El checkpoint. Also, Israeli special forces arrested four Palestinians from Deir Jereer village near Ramallah.

On the same day, 19 December 2017, A’hed’s mother, Narmeen al-Tamimi was arrested from Benyamin police station, when she was going to check on her daughter, she is waiting for a hearing today. In addition, Wednesday, 20 December 2017, during A’hed’s hearing, Basem her father received a summon for interrogations. Both of A’hed’s parents as ex-detainees and human rights activists mainly against the wall and the settlements.

Also, on Wednesday, 20 December, the Israeli occupation forces arrested 21-year-old Nour al-Tamimi from her home in al-Nabi Saleh, who is Basem’s niece. Nour is waiting for a court hearing today.

·         Hebron: The number of detainees from Hebron in the past few days reached 12 people, five of them were arrested this morning.

·         Bethlehem: Israeli occupation forces arrest around five Palestinians from the city including the 15-year-old Muhammad A’qel.

Since Turmp’s declaration on Jerusalem, 6 December 2017, the Israeli occupation forces have arrested around 500 Palestinians including 170 children and 10 women. Most of the detainees from Jerusalem received conditional release, which is usually house arrest, financial guarantees or both. As for Palestinians in the West Bank, they are tried in Ofer or Salem military courts despite the difference in their age. Actually, there are now 200 Palestinian children detained in Ofer, 77 children of them were detained only during December 2017. Moreover, documentation shows that 37 children of those detained in Ofer only after Trump's declaration of Jerusalem have experienced humiliation and brutal direct beating from Israeli occupation soldiers while getting arrested.

These mass arrest and harassment campaigns are part of Israeli’s collective punishment measures that are in direct violation of Article 33 of the Fourth Geneva Convention and Article 50 of the Hague Regulations which specifically prohibits collective punishment. In point of fact, this arrest campaign shows an Israeli policy of targeting valuable groups, whether children, women of disabled people. Israeli occupation forces systematically detain children and violate international humanitarian law and international human rights law. The Convention on the Rights of the Child underlines in Article 27(b) that “No child shall be deprived of his or her liberty unlawfully or arbitrarily.” The article further underlines that in the case of arrest, “the arrest, detention or imprisonment of a child shall be in conformity with the law and shall be used only as a measure of last resort and for the shortest appropriate period of time”.

As such, Addameer calls on the immediate release of all prisoner. In addition, we call on third state parties to immediately pressure the Israeli occupation authorities to respect their obligations under international humanitarian law and international human rights law. Also, to stop this systematic policy of targeting vulnerable groups including children, women and disabled people and allow Palestinians to practice their right to peaceful assembly and protest.

02-02-2023
In a Joint Submission to the UN Commission of Inquiry, Palestinian Organizations Highlight Israeli Policies to Entrench and Maintain its Settler-Colonial and Apartheid Regime
24-01-2023
Commemorating the International Day of Education by Highlighting the Reality of the Right to Education for Palestinian Political Prisoners
03-12-2022
PHROC Staunchly Supports the UN General Assembly Request for an International Court of Justice Advisory Opinion on the Consequences of Israel’s Prolonged Occupation of Palestine