Ahed Tamimi charged with assault, and several other counts 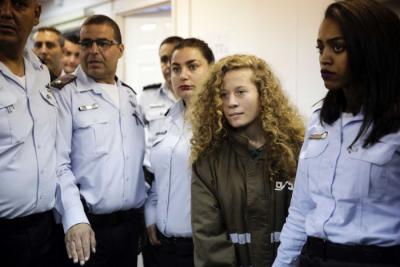 Ahed Tamimi, the young girl who was filmed in an encounter with soldiers in her home village of Nabi Saleh, near Ramallah, has been charged with five counts of assaulting a soldier, one count of throwing stones and several other charges ranging from threatening a soldier to incitement. The list totals 12 specific charges. Nour, Ahed’s cousin who was also featured in the video, was charged with aggravated assault and for interfering with a soldier while carrying out their duty.

Additionally, Ahed’s mother, Nariman Tamimi, has been charged with incitement as a result of her live streaming the incident.

It is alleged that the soldier in the video was the same soldier who had shot Ahed’s 15-year-old cousin, Muhammad Tamimi, in the head with a rubber bullet only hours prior.

If convicted, it is likely that Ahed will serve years behind bars.

The Tamimis, as a particularly engaged family, are already well plugged into international activists circle, which is the reason that the video of the incident went viral in the first place.

As such, this particular case has gained global attention and is particularly threatening to the Israeli authorities. When an individual gains a voice internationally, and is able to become the face of the quest for Palestinian self-determination, then that individual becomes something of a threat.

The arrest and charging of Ahed Tamimi represents a grave violation of Israel’s obligations under the Convention on the Rights of Child. According to article 37, imprisonment of a child shall only be used as a measure of last resort. For anyone who has seen the video, the crime here is not egregious or threatening to the soldier’s life or being. These charges represent a continuation of the Israeli policy of discriminating against Palestinian children, and charging them for offences which their Israeli  counterparts would never be detained for.

As such, Addameer calls on Israel, the occupying power, to meet its obligations under international law. This would require it to drop the charges against Ahed, as this would truly be in the interest of the child.

In addition, it would require the dropping of charges against Nariman, who has documented an incident and expressed political opinions. The act of political expression is protected under article 19 of the International Covenant on Civil and Political Rights.

A campaign of support has already started to gain momentum, and we call on all supporters to assist  in whatever way they are able. If that means signing a petition, please find one here. If that means writing a letter to your relevant representative, we encourage you to do so. Only through concerted, international pressure can we ensure that these human rights defenders to not end up serving jail time for the crime of seeking the right of self-determination.