Get the facts on Palestinian hunger strikes 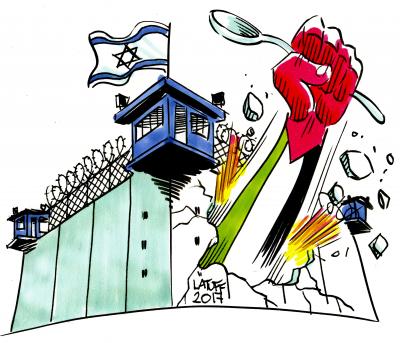 What is the History of Palestinian Hunger Strikes? Hunger strikes have long been used in different geographical areas as means to protest and demand basic rights, including the right to vote, the right to be free from torture and the right to self-determination. The long history of Palestinian prisoners in mass and individual hunger strikes, reveals the lack of trust in any judicial process and the lack of fair trial guarantees they face under the military and civil court systems of the Israeli occupation. Palestinian prisoners and detainees have resorted to hunger strikes as early as 1968 as a legitimate peaceful protest to Israeli detention policies and cruel detention conditions including the use of solitary confinement, denial of family visits, inadequate medical treatment and torture and other forms of cruel, inhuman or degrading treatment.

What are the Medical Risks of Hunger Strikes? Hunger strikes have associated health risks that can cause physical damage to the prisoner or detainee, including severe loss of weight, weakness, tiredness, inability to sleep, hearing loss, blindness, strokes, kidney failure as well as other organ failures, cardiac arrest, and heart attack. However, despite these medical risks, through hunger strikes, Palestinians have been able to obtain basic and fundamental rights and to improve their detention conditions through hunger strikes.

How do Israeli Authorities Deal with Hunger Strikes? Hunger strikes are often met with violent and coercive repression by Israeli Prison Service and special units, as well as medical personnel to push detainees to end their hunger strikes. Following hunger strikes, Addameer has documented several cases of raids on prison cells, transfers of hunger strikers to isolation cells, threats of indefinite detention, banning family visitation, reduction of money spent in the canteen.

What were other coercive measures taken? In response to the use of hunger strikes by Palestinian prisoners and detainees, Israeli authorities practiced force-feeding during the 1980s. It was subsequently ceased by order from the Israeli High Court following several deaths of Palestinian prisoners resulting from force-feeding. At the time of earlier hunger strikes, Israel practiced force-feeding of hunger-strikers in order to coerce detainees to end to their hunger strikes without any legislation to regulate this measure. Several Palestinian prisoners have died as a result of being subjected to force-feeding. These include Abdul-Qader Abu al-Fahm who had died on 11 May 1970 during a hunger strike in Ashkelon prison, Rasem Halawah and Ali al-Ja'fari, who died following the insertion of the feeding tubes into their lungs instead of their stomachs in July 1980 during a hunger strike in Nafha prison, and Ishaq Maragha, who died in Beersheba prison in 1983. Recently, a proposal for a legislation by the Israeli minister of Public Security Gilad Erdan was initiated in response to the mass hunger strike of 2012 with the purpose of putting an end to future hunger-strikes and depriving Palestinian detainees and prisoners of their fundamental right to peaceful protest. The bill was approved by the Israeli Knesset on the 30th of July 2015.

Why do Palestinians Resort to Hunger Strikes? Palestinian prisoners and detainees resort to hunger strike in order to protest and have their voices heard outside an unfair legal system which administers their arbitrary detention and the repression of their voices. However, Israeli occupation authorities have not managed to break the will of Palestinian hunger strikers who continue to use their bodies, in the absence of any adequate judicial remedies, to practice legitimate disobedience. Hunger strikers defy disciplinary power of control and domination; the body of the hunger striker thereby constitutes a medium through which power is shifted and recreated. The prisoners and detainees refuse to comply with the prison’s structured system of constrain and privation where they do not have full autonomy over their bodies. Thus, through hunger strikes, these prisoners and detainees re-gain sovereignty over their bodies through becoming decision makers over the prison authorities.

What Are Our Demands?  Addameer Prisoner Support urges supporters of justice around the world to take action to support the Palestinian prisoners whose bodies and lives are on the line for freedom and dignity. Addameer urges all people to organize events in solidarity with the struggle of hunger-striking prisoners and detainees. 2017 marks 100 years of the Balfour declaration; 70 years of Palestinian Catastrophe (al-Nakba); 50 years of brutal military occupation. This is also the year to hold the Israeli occupation accountable for its actions and to demand the immediate release of all Palestinian political prisoners!

Addameer further calls upon the international community to demand that the Israeli government to respect the will of hunger strikers who use their bodies as a legitimate means of protest, which has been recognized by the World Medical Association (WMA) Declaration of Malta on Hunger Strikes as “often a form of protest by people who lack other ways of making their demands known.”