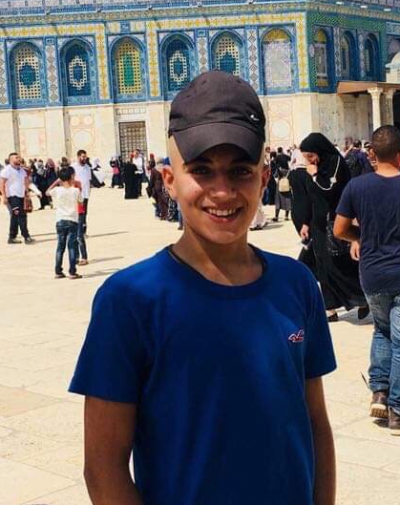 Suleiman was arrested for the second time in 2019, only after a number of days of the arrest of his sister Mais Abu Gush. Suleiman was taken to al-Mascobiyya where his sister was held, interrogated and tortured. Suleiman and Mais were forced to see each other in an attempt to pressure Mais during his interrogations. The pressure did not stop on just forcing them to see each other, the Israeli occupation authorities issued a four-months administrative detention order against Suleiman as well.

The Israeli soldiers detained Suleiman in a room at Ofer prison where he was subjected to a thorough inspection. Then he was taken to a military jeep where he was blindfolded with a piece of cloth and his hands were tied forward with plastic restraints. He was then transferred by a military jeep to another room where he was inspected again. After his medical examination, Suleiman was given “Shabaas” prison clothes and then transferred to the minor’s section in Ofer prison. Suleiman remained in the minor’s section for a period of two days before he was taken to be interrogated. The main focus of Suleiman’s interrogation concerned his publications and pictures posted on his Facebook page. Suleiman was also interrogated regarding his brother’s death in 2016 and the reasons as to why his brother had carried out a stabbing attack. The interrogation lasted for an hour and then Suleiman was returned to the minor section in Ofer prison.

After about a week of Suleiman’s arrest, a list of charges was filed against him in which it included incitement on social media, specifically Facebook, alleging that his posts conveyed support for a “hostile organization.” In addition, the military prosecution claimed that Suliman was impacting the public opinion in his area in a manner that would affect the public’s safety and order. Due to his online posts, he was also accused of supporting the actions and objectives of a “hostile organization.” His publications were perceived as praise regarding the martyrs and symbols of Hamas, which is classified by the occupation forces as an “illegal” organization. The list included the number of comments and likes that were made on the posts. The occupation policy continues to violate the Palestinians’ rights to freedom of opinion and expression where they are continuously prosecuted because of their posts that express their opinions and beliefs. Therefore, the occupation forces are in direct violation of legitimate and protected rights under international conventions and agreements. The military prosecution requested the extension of Suleiman’s detention until his court proceedings are enforced. However, the military judged decided to release Suleiman on bail of 4000 NIS and appointed him to a court date, 6 February 2019. Unfortunately, the prosecution requested that Suleiman’s detention be extended for 72 hours to issue an administrative detention order against him. The military judge claimed that after he reviewed the material, he was convinced that there is a possibility of issuing an administrative detention order against Suleiman. He then, decided to reduce the period requested by the prosecution to 48 hours instead. Suleiman’s arrest was extended to 23 January 2019 in order to be issued with administrative detention.

The Child…Under the Hammer of Revenge

Suleiman’s family is composed of four brothers and three sisters where they reside in Qalandia Refugee Camp, north of occupied Jerusalem. The family lost a member, a son and an older brother, three years ago, when Hussein Abu Ghosh was killed on 25 January 2016 by the Israeli occupation forces. The reason of his assignation was an alleged stabbing attack in the settlement of Beit Horon that is placed on the village of Beit Awr al-Fawqa. Since then, the family has been subject to various types of restrictions and collective punishment by the occupation. For instance, the body of Hussein Abu Ghosh was detained for four days before the occupation forces returned his body back to his family. The Israeli armed forces also demolished the family’s house two months after the assassination of their son. An order was issued prohibiting the restoration of the house. There has been a continuation of collective punishment mechanisms imposed by the occupation authorities against the family of Abu Ghosh. As revenge from the family, the Israeli armed forces arrested their second child, Suleiman, on the anniversary of Hussein’s death. 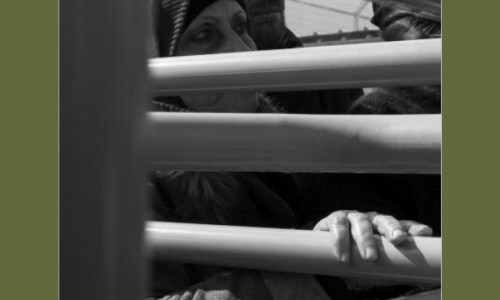