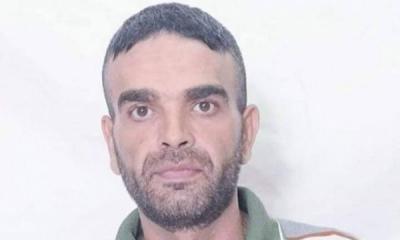 In their first attempt to arrest Sami Abu Deyak, the Israel Occupation Forces only managed to injure his leg. The second time, on 17 July 2002, they stormed his village of Selat Al Thahr and arrested him. During the arrest, he was hit on his arms and his head. Two of his friends were killed during his arrest and another injured. After his arrest, he went through intensive interrogation at the Jalameh interrogation center where he was subjected to various types of physical and psychological torture. During the interrogation period, he was transferred to the hospital three times as a result of the torture and after each time the Israeli occupation forces brought Sami Abu Deyak directly from the hospital to the interrogation rooms once again. After 75 days of this intensive interrogation and torture, the military occupation court sentenced Sami Abu Deyak to three life sentences and 30 years in prison. Of these 30, he has done 17 years, many of them being transferred in and between prisons, clinics, and hospitals. He has been in solitary confinement, isolated from his family, lawyers, the outside world, and other prisoners several times for many months as well as subjected to intense repression and humiliation, like all Palestinian prisoners. In the beginning of his imprisonment, his parents were not allowed to visit him at all, and his released brothers are still prohibited from visiting him. Three years after Sami was imprisoned, his brother Samer was also arrested by the Israeli occupation forces and sentenced to life imprisonment for 25 years. The brothers' continue to suffer at the hand of the medical negligence that characterizes the prisons of the occupation forces.

Necks under the Sword of Illness

In 2015, Sami Abu Deyak was in Raymoun Prison when he began suffering from abdominal pain. The prison clinic gave him painkillers without diagnosing him, and two weeks later Sami lost consciousness and was transferred to Soroka Hospital. In the hospital they performed an operation and told his brother Samer, who was then in Hadarim prison, that he needed an operation to remove his appendix. Two days after the operation, Sami was transferred to the Ramlah prison clinic, where the doctor reported that his condition was abnormal and his pains were continuing. He was transferred back to Soroka Hospital. At Soroka hospital, he was examined by the doctor who conducted the operation and this doctor said he was normal. Within 48 hours, Sami was transferred five times between Ramlah prison clinic and Soroka hospital without being diagnosed while suffering from constant pain. He was transferred to Assaf Harofeh Hospital for the sixth time. When he entered the hospital they performed an operation and removed 30 cm of his intestines and diagnosed him with cancer. While in Assaf Harofeh Hospital, he underwent four operations and stayed for four months. His critical medical condition was exacerbated by the wrong diagnosis and appendectomy he was given at Soroka Hospital, and he entered a coma for 34 days. When he had his intestinal operation at Asaf Harofeh Hospital, the Hadarim prison administration told his brother, Samer, that Sami was in critical condition and allowed Samer to see his brother for one last time. Samer was taken to Assaf Harofeh hospital to find Sami unconscious and in a critical medical condition, but still cuffed by his hands and feet. Samer met his brother’s doctor at Soroka Hospital and she informed him of his brother's medical condition and the medical interventions he had undergone. She told him Sami’s condition was hopeless and they were going to remove the medical equipment from him. The next day, the occupation authorities brought Sami’s family to see him for the last time. However, at the very last minute, Sami moved his fingers and opened one of his eyes. The doctors then decided not to remove the devices. Sami was transferred to Ramlah Prison Clinic where he began chemotherapy and continued treatment for 8 months. After these 8 months, he was transferred back to Raymoun Prison. In 2017, Sami began to feel pain again and was taken back to Ramlah Prison Clinic. After some tests, it was found that there was a cancerous mass in his stomach. He began chemotherapy again at Assaf Harofeh Hospital and continued treatment for 12 months. At the beginning of his second treatment, the doctor spoke with Samer and told him that the disease had spread in the intestines and the medicine was not working. At the end of 2017, Samer was transferred to Ramlah Prison Clinic in order to take care his sick brother. To this day, Sami still takes drugs and painkillers to ease his pain, and he is unable to sleep or eat normally. He can only move on a wheelchair, and he needs special and continuous care for his daily life.

Families and medical negligence: two lockers on one cell

Sami Abu Deyak’s case is only one of many very similar cases in the Israeli prisons. He not only suffers from severe diseases but on top of that, from severe medical negligence. This situation highlights the blatant disregard the occupation authorities have for the lives of prisoners and for their responsibilities to prisoners under international law. First, the occupation authorities did not allow Sami to be diagnosed, only giving him painkillers despite the long period he suffered from aches. He was not given the chance to undergo the necessary medical examinations immediately after he felt pain, which aggravated his suffering and illness. Even after he was finally transferred to the hospital, an error during his operation worsened his health condition, and he went into a long coma. Article 76 of the Fourth Geneva Convention affirms that medical care required by the health condition of a prisoner must be provided. Sami’s condition was very serious, and proper health care should have been provided for his exact condition. This was and still is not available at the Ramlah Prison Clinic, which lacks the minimum health care requirements needed to treat Sami. Returning Sami two days after the operation to the Ramlah prison clinic is contrary to what is guaranteed by the international covenants that require the provision of appropriate health care that does not exist in the Ramlah prison clinic. Article 27 of the Standard Minimum Rules for the Treatment of Prisoners states:

“All prisons shall ensure immediate access to medical care in urgent cases, and prisoners whose cases require specialized care or surgery shall be transferred to specialized institutions or to civilian hospitals. When the prison has its own medical services, which includes hospital facilities, it shall have adequate staff and equipment to provide appropriate treatment and care services to the prisoners referred to it”

In the case of the prisoner Sami Abu Deyak, he did not receive immediate medical care, nor did he stay in qualified civilian hospitals long enough to treat his severe health condition. The occupational forces transferred him many times between the civilian hospitals and Ramlah Prison Clinic which does not include the hospital facilities, with no specialized staff or appropriate treatment services. This movement exasperated Sami’s suffering and aggravated his condition, a clear violation of his right to adequate and appropriate treatment and health care. The need for the presence of Samer and other prisoners to care for sick prisoners in a the Prison Clinic clearly shows the lack of resources, doctors, and nurses provided to sick prisoners according to their needs and health status in these clinics. In addition to allowing him to suffer without diagnosis for two weeks, not providing him with adequate medical care for his critical condition, and constant transfer between prisons and hospitals when he was very sick, they also kept him confined, hands and feet bound to the hospital bed, even when he was unconscious.

Sami’s case is a continuation of blatant disregard for the life and well-being of Palestinian prisoners and one case in a series of violations committed by the occupation in regards to prisoners' right to health and adequate medical care. Even with Sami’s worsening health condition, the early release committee of the prison administration refused to consider the request for his early release. The committee applied the Anti-Terrorism Act of 2016 to justify this decision. This act and its amendments state," prisoners who have been charged with premeditated murder and assisted murder under the Anti-Terrorism Act will not be given the opportunity to shorten their sentences.”

The prisoner Sami Abu Deyak is a witness to the violations of the basic rights of prisoners on behalf of the occupation: the failure to respond in a timely manner to cases of severe illness, delay in the diagnosis of diseases, denial of access  to adequate medical care, and continuous transfer and medical neglect. Many prisoners are killed because of this kind of medical neglect. The impacts of medical neglect and these violations of both the rights of prisoners and international law are not only felt during detention, but continue to impact the lives and the physical and mental health of Palestinian prisoners and their families, even after they have been released.