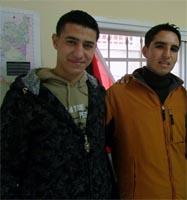 Mahmoud Nafa’ (Right)
Date of birth: 20 May 1991
Place of residence: Ni’lin
Occupation: Student
Date of arrest: 2 February 2010
Detained at Ofer: 77 days
Released on bail: 5,000 NIS (USD $1,340)
Click Here to Download PDF 0.8 MB
INTIMIDATION, ARREST AND DETENTION
Mahmoud Nafa’ and Sabti Khawaja were arrested by Israeli security authorities on 2 February 2010 at Ofer Military Base after appearing for interrogation as ordered in Israeli summonses delivered to both.

For both Sabti and Mahmoud, their arrests followed weeks of sustained intimidation and harassment by the Israeli Occupying Forces (IOF) against their families. Soldiers from the IOF had been to the Khawaja family home on four or five occasions to threaten Sabti and his family. The third time the IOF went to the home, in January 2010, soldiers ransacked the house, damaging furniture, walls and cupboards (see photo below).

o    The charges against Sabti and Mahmoud be dropped immediately;

o    Israeli forces in the OPT immediately cease their unlawful arrest and detention policies of Palestinian human rights defenders, and put an immediate end to the illegal measures of collective harassment and abuse levied against whole communities in the path of the Annexation Wall; and,
o    The military law governing the OPT, drafted to control every aspect of Palestinian civic life, well beyond the jurisdictional parameters granted to occupying authorities under international law, be abolished and instead Palestinians’ freedoms to assembly and expression and right to self-determination be respected, including the right to devise and enforce their own legal system.

For more information about Israeli arrest and detention of Palestinian human rights defenders, please visit our website www.addameer.info, or contact us directly:
Addameer Prisoner Support and Human Rights Association
P. O. Box: 17338, Jerusalem
Tel: +972 (0)2 296 0446 / 297 0136
Fax: +972 (0)2 296 0447
Email: [email protected]
Website: www.addameer.info
1 Addameer and Stop the Wall, Repression Allowed, Resistance Denied: Israel’s Suppression of the Popular Movement against the Apartheid Annexation Wall, July 2009 (available at: Click Here).
2 See, Addameer, Defending Palestinian Prisoners: A Report on the Status of Defense Lawyers in Israeli Military Courts, April 2008 (available at: Click Here).
3 See Addameer, Presumed Guilty: Failures of the Israeli Military Court System, November 2009 (available at: Click Here).
4 However, it should be noted that even cases in the Israeli civil court system, when they concern so-called “security” offenses, bear many of the same rights-violating characteristics of Israeli military courts.
5 Articles 10 and 11(a) of the Universal Declaration of Human Rights stipulate that every person is entitled to a “fair hearing” by an “independent and impartial tribunal” and to be “presumed innocent until proved guilty in a public trial at which he[/she] has had all the guarantees necessary for his defense” respectively. Article 14(2) of the International Covenant on Civil and Political Rights (ICCPR) ensures “the right to be presumed innocent until proved guilty according to law”.
Last Update
02-02-2010