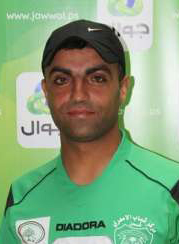 Name: Omar Khalid Abu Rweis
Profession: Football Player
Date of birth: 10 September 1989
Date of Arrest: 20 February 2012
Place of Arrest: Palestinian Red Crescent Society (PRCS)
Marital status: Single
Prison: Ayshel Prison
Arrest
Omar was arrested on 20 February 2012 at 12:00pm when he was in front of the Palestinian Red Crescent Society (PRCS). More than 25 soldiers arrested him, as well as a group of other young Palestinians, including Mohammad Sa’di Nimer who is a football player for Al-Khader Football Team in Bethlehem.
After being arrested, Omar was immediately transferred to Moskobiyyeh Interrogation Center, where he was interrogated under harsh conditions for 45 days. He was then transferred to Ofer Prison to await trial since a list of charges have been issued against him. He has had seven hearings since his arrest; his next hearing is on 19 June 2013. He still has not been sentenced and is currently detained in Ayshel Prison.
Omar’s father told Addameer that he is being charged with possession of a weapon and using it against Israeli vehicles. He denies the allegations. His family has been able to visit him twice in Ofer, the last visit being in August 2012 for only forty minutes. He is currently being denied family visits.
Previous Arrest
Omar was arrested in November 2007 for one month. He was released after one month of interrogation without any charges.
Football Career
<img data-cke-saved-src="/userfiles/image/Omar%20Team.png" src="/userfiles/image/Omar%20Team.png" width="132" height="107" align="left" alt=" />Omar is the goalkeeper on the Palestinian Olympic Team, and the captain of Al-Ama’ri Football Team. He was a member on the Al-Ama’ri team since he was 12 years old, and started playing with the adult team when he was 16 as a goalkeeper. Omar left high school to pursue his football career. He has travelled internationally to play football, his latest trip being to Norway for a tournament. The Palestinian team reached the final stages, but refused to participate in the finals due to the Israeli teams participation. Omar’s father believes this may be a reason for arresting Omar. Omar had received many offers to play in international leagues, including in Norway and Sweden, but he has refused them, as he prefers to only represent the Palestinian team.
Family
Omar is the oldest son of seven siblings. His father is a blacksmith. Since Omar’s arrest, the Occupation Forces have denied his father work permits to allow him to go to Jerusalem to purchase supplies. Omar’s father is facing increased difficulties at work and financial problems, especially as Omar’s salary was discontinued by the Al-Ama’ri Football Club after his arrest. Football is not just Omar’s hobby, it is also his profession that he depends on to provide for his family. The family is also concerned that if Omar is sentenced, his mother and one brother will never be able to visit him as they have Gaza Identification Cards.
Last Update
02-06-2013