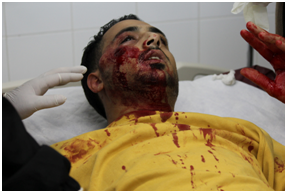 Name: Mohammad Al–Azzeh
Date of Birth: 6 March 1990
Date of Arrest: 1 July 2013
Place of Birth: Aida refugee camp, Bethlehem
Place of Arrest: Residence
Occupation: Director of Media Unit in Lajee Center
Marital Status: Single
Background
Mohammad works at theLajee Center in Aida refugee camp, Bethlehem, as a director of the Media Unit. He runs a program there which teaches children in the camp the arts of still photography and videography. Mohammad also holds an annual photography exhibition and has directed and produced three short films. He has won multiple awards for his works, all of which document the daily struggle of Palestinians living under occupation in Aida refugee camp.
Shooting
Mohammad’s arrest came just weeks after being shot in the cheek with a rubber-coated steel bullet while photographing an Israeli incursion into Aida refugee camp. Israeli incursions into the camp this year have become a regular occurrence, and Mohammad has made a habit out of photographing and filming the clashes between Israeli Occupation Forces (IOF) and the camp’s residents. On 8 April 2013, after finishing a long day of work, Mohammad stepped out to the balcony of his office to photograph the Israeli soldiers who had just entered the camp. When Israeli forces shouted at Mohammad to stop taking pictures, he initially ignored them. As they began to approach the balcony from below, Mohammad decided it would be best to retreat back into his office. An Israeli soldier (pictured below) shot Mohammad as he closed the door to his balcony, striking him with a rubber bullet in his right cheek.
Even after shooting Mohammad, Israeli forces made it very difficult for Mohammad to receive medical attention. When he tried to leave the building from the front door, soldiers shot at the door even as blood continued to pour out of Mohammad’s wound.
After spending 15 days in hospital and undergoing multiple surgeries to remove the bullet from his cheek and reconstruct his shattered jaw, Mohammad was released. On his second day out of the hospital, soldiers came to Mohammad’s family home in search of Mohammad. Although Mohammad was not home that day, the soldiers harassed his family for hours before leaving. Mohammad stayed away from his home for two months and his home was violently raided two more times during those two months. During each raid, Mohammad’s family members were harassed and beaten by IOF soldiers for refusing to divulge information about his whereabouts.
Arrest and Imprisonment
On his first day home since being released from the hospital (1 July 2013), Mohammad was arrested during a brutal raid of his family’s residenceby IOF. During the raid, Israeli forces assaulted Mohammad’s family members, destroyed much of his family’s property, and beat Mohammad with no regard for his impending surgical procedures to treat the gunshot wound in his cheek.
He was then taken to Asyoun detention center for two days before he was transferred to Ofer Prison, where he spent nine days before being released on 11 July. During his time in prison, Mohammad was given no medical attention for his wounded cheek despite his repeated requests.
<img data-cke-saved-src="/userfiles/image/MohammadAzzehSoldier.png" src="/userfiles/image/MohammadAzzehSoldier.png" width="349" height="522" alt=" />
(photo courtesy of Mohammad Al-Azzeh)
Last Update
16-02-2014