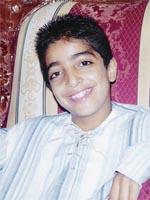 Date of birth: 23 October 1993
Place of residence: Qalandiya Refugee Camp
Occupation: Student
Date of arrest: 20 March 2010
Place of detention: Ofer Prison
Number of administrative detention orders: Three
First administrative detention order: 27 March 2010
Second administrative detention order: 26 June 2010
Third administrative detention order: 26 September 2010
Date of Release: 26 December 2010
Duration of detention without charge or trial: 282
ARREST
Moatasem was arrested at approximately 3 a.m. on 20 March 2010 when Israeli soldiers broke down the front door and stormed his family’s home in Qalandiya Refugee Camp. Awoken to find heavily armed soldiers in his room, Moatasem was immediately restrained with his hands tied behind his back. Led out of the home wearing only pajamas, Moatasem requested to put on warm clothes, but the soldiers only allowed him to put on sandals.
He was then led, blindfolded and still restrained, down the road outside his house to the main road where the soldiers’ military vehicles were parked. The soldiers removed Moatasem’s blindfold and asked his name. After confirming his identity with a photograph, the soldiers put the blindfold back on Moatasem and led him into one of their vehicles. During his transfer, a soldier ordered Moatasem to place his head on his knees and slapped him every time he tried to sit up. Moatasem recalls that this caused him ‘extreme pain.’ At no time during this process was Moatasem told why he was being arrested, or where he was being taken.
Moatasem was then taken to an undisclosed location and made to fill out a medical form before being left tied up outside near two shipping containers. He remained there, cold and shivering for many hours, hearing only threatening sounds of dogs and soldiers. Towards the morning, a soldier brought him a blanket.
At around 2 p.m., Moatasem was taken in another military vehicle to Ofer Military Base near Ramallah. After his arrival at Ofer, he was strip-searched and forced to sit naked on the ground until he was given a brown prison uniform. Moatasem was then taken to a cell holding both adults and children.
INTERROGATION
On 22 March 2010, Moatasem was taken to Binyamin police station for interrogation. Arriving at the police station at 8:30 a.m., he waited for more than five hours with his hands and feet shackled. At 2 p.m., he was taken into an interrogation room for questioning. He remained shackled at the hands and feet the whole time. Moatasem recalled to DCI-Palestine that: “I sat in the chair in the interrogation room while my hands and feet were still shackled. Then, the interrogator started asking me about the plot without explaining what the plot was. ‘I don’t know what you’re talking about,’ I said to him and he asked me about the riot, bullets and weapons without giving any further explanation. I denied knowledge because I really didn’t know what he was talking about and I really had nothing to do with those things. Then, he asked me about the internet and a guy named Mohammad from Gaza I chat with. I told him I didn’t know Mohammad that well. I met him in some chat room and we talk about school and tests and so on. ‘Liar,’ the interrogator said to me and kept focusing on asking me about this guy.” [1] DCI-Palestine, Urgent Appeal-Administrative Detention (available at: http://www.dci-pal.org/english/display.cfm?DocId=1437&CategoryId=1)
Last Update
20-03-2010