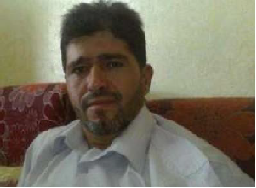 Date of birth: 7 July 1971
Place of residence: Araba, Jenin
Marital status: Married, with seven children
Date of arrest: 22 November 2012
Occupation: Construction
Place of detention: Ramleh Prison Clinic
Expected end of current detention order: 22 February 2013
UPDATE 28 May 2013 – Jafar was released on 8 May 2013 after ending, on 27 February 2013, his 92-day hunger strike. Jafar began his hunger strike on 28 November 2012 to protest his arbitrary arrest and detention.
ARREST
Jafar was arrested at 2 am on 22 November 2012, a few hours after the ceasefire came into effect bringing an end to the recent attacks on the Gaza Strip. After having his hands tied behind his back with plastic hand cuffs and being blindfolded, Jafar was transferred to Dotan settlement, near Jenin. Upon reaching Dotan Jafar remained on the floor of the Israeli jeep and remained in this position until 7 am when he was transferred to Megiddo prison. After a few hours he was again transferred to Salem interrogation center, when he spent two hours being interrogated about alleged ties to Islamic Jihad. When Jafar denied any such ties to Islamic Jihad he was returned to Megiddo.
ADMINISTRATVE DETENTION & HUNGER STRIKE
On 28 November 2013 Jafar was given an administration detention order for three months from the date of his arrest. Jafar immediately launched a hunger strike to protest his administrative detention, along with two fellow detainees who were in similar circumstances, Yousef Shaban Yassin and Tarek Qa‘adan.
This latest arrest is Jafar’s seventh and following most of these arrests he was placed in administrative detention. On 19 June 2012 he was released from his previous period of administrative detention which lasted four months. During this time he was Jafar spent a long period of time on hunger strike. After his release his health was in a very bad state but despite this he was re-arrested. Israeli intelligence claimed that he participated in an event for Islamic Jihad, although they did not specify which event.
Jafar’s arrest on 22 November 2012 is part of a broader arrest campaign by Israeli Occupation Forces (IOF) against Palestinian’s who express any form of solidarity with their fellow Palestinians. It also seems that IOF intends to get revenge on Jafar since he participated in the hunger strikes campaign, which resulted in his release. The claims against Jafar are based on ‘secret evidence’ and are inaccessible to either Jafar or his defense making it impossible to defend against.
As mentioned, this is Jafar’s second hunger strike in a short period of time. On 19 March 2012 he was arrested and immediately launched a hunger strike. Two days later he was issued with an administration order for three months. Jafar continued with his hunger strike until 14 May 2012, when an agreement was reached to end the mass hunger strike which involved approximately 2,000 Palestinian political prisoners. Included in the agreement was the provision that administrative detainees would not have their administrative detention orders extended. As of 30 January 2013 Jaraf was on his 64th day of hunger strike.
HEALTH
As a result of the hunger strikes, Jafar suffers from a number of different medical conditions and is in serious danger if he does not receive treatment for these conditions. These conditions include very low blood pressure; constant dizziness and headaches; pains in his hands and knees; and lack of protein, especially in his spinal cord. On 24 January 2013 Jafar was transferred to Assaf Harofeh hospital after his health deteriorated even further. Upon being admitted to hospital he began taking glucose, after which there was a slight improvement in his health.
FAMILY
Jafar is married with seven children. His oldest son, Momen, is 16 years old and cannot visit his father for ‘security’ reasons, as it is required that children who are over the age of 16 obtain a permit from Israeli intelligence to visit their family members in prison. His youngest son Nasir is seven months old and was born when Jafar was in prison following his hunger strike. The name Nasir means victory.
Jafar’s wife is also forbidden from visiting her husband on security grounds, as are all of Jafar’s brother and sisters. The Red Cross has told his wife that Jafar is being punished and no one can visit him, so she cannot send their other children to see their father with any other family members.
***
Administrative detention is a procedure that allows the Israeli military to hold detainees indefinitely on secret information without charging them or allowing them to stand trial. In the occupied Palestinian West Bank, the Israeli army is authorized to issue administrative detention orders against Palestinian civilians on the basis of Military Order 1651. This order empowers military commanders to detain an individual for up to six month renewable periods if they have “reasonable grounds to presume that the security of the area or public security require the detention.” On or just before the expiry date, the detention order is frequently renewed. This process can be continued indefinitely.
For more information about administrative detention and Addameer’s Campaign to Stop Administrative Detention see:
http://www.addameer.org/admin_detention.php.
Read Addameer’s report on administrative detention:
Administrative Detention in the Occupied Palestinian Territory: A Legal Analysis Report, updated July 2010.
ACT NOW!
Here is how you can help Jafar Azzidine:
*Write to the Israeli government, military and legal authorities and demand that Jafar Azzidine be released immediately and his administrative detention order not be renewed.
*Write to your own elected representatives urging them to pressure Israel to release Jafar Azzidine and to put an end to such an unjust, arbitrary and cruel system of incarceration without trial.
Last Update
30-01-2013