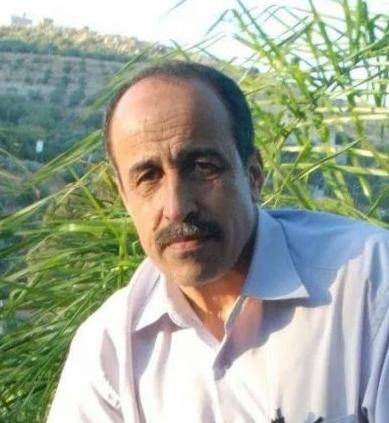 Ghassan was arrested from his home on 6 July 2014 during a raid by the Israeli Occupying Forces (IOF). The IOF raided his home at 2:00AM, searched the entire house and destroyed much of the contents. The soldiers forced the family members to gather in one room, as they continued the search. An hour later, they took Ghassan’s ID card, then arrested him and shacked his hands and legs.

Ghassan Thouqan has been arrested six times, for a total of eight years.

Fifth arrest: 2011 to 2012- one year under administrative detention. Sixth arrest: the most recent arrest- 2014 until present.

Ghassan suffers from several diseases, including asthma, which requires him to take special medication regularly, as well as seasonal allergies. He also has a spinal disc injury, which causes him pain in his back and arms. Most recently, he has started suffering from severe pain in his right arm which sometimes prevents him from being able to move it.

Ghassan has four sons (Moath 29, Mohammad 23, Baraa 19, Bahaa 16) and four daughters (Shaima 31, Lababa 30, Alaa 27, Hiba 22). Lababa, Ghassan’s daughter, told Addameer: “The occupation denied us the presence of our father in our lives for many years. They denied him from participating in our special occasions like marriages, graduations, births… the absence of my father is a very painful thing… for example, my brother delayed his wedding more than once because of my father’s repetitive arrests and in the end he was forced to have his wedding without our father because he was arrested a week before the wedding date. My sister Alaa also got married while my father was in prison. There are so many events and occasions that happened while my father was detained in the occupation’s prisons. Administrative detention is like a sword pointed at us and our lives because it is continuous, repetitive and causing us to lose hope as a family.” Detention affecting his academic work: Lababa continued: “My father is a well known academic figure. His arrest is evidence of the targeting of powerful and influential figures, especially those with academic influence that aim to build an educated generation to improve the society.” She added, “Because of his repeated arrests, sometimes my father writes the exams long before their actual date and gives them to another lecturer just in case of his arrest. The arrest also affects the academic relationship between a teacher and his students.”

Ghassan was arrested in June 2014 as a political reaction and punitive measure against Palestinian society, during which hundreds of Palestinians were arrested, including activists who were accused of being affiliated with political parties like Hamas. Since his arrest, there has not been any public information to suggest that Ghassan is affiliated in any security activities or activities against the occupation. The military prosecution stated in Ghassan’s latest confirmation session (8 April 2015) that they don’t have new information against the detainee but he is an active member in Hamas and accordingly the prosecution requested the judge to confirm the order. The renewal of Ghassan’s order was based on secret information that was not provided to his lawyer. It should be mentioned that the Israeli police did not interrogate him regarding this accusation nor is there evidence to prove the claim.