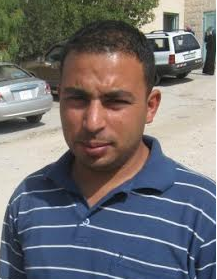 A large number of the occupation’s forces stormed Ghassan Jaber’s house on 8 June 2014 at 3 AM. After identifying the family members, the Israeli Occupying Forces (IOF) arrested Ghassan, leaving the family uniformed about Ghassan’s place or the reason behind his arrest. The family learned later of his detention in Ofer prison, and that the Israeli occupation’s military commander issued a six-month administrative detention order against him.

Three years later, on 24 November 2011, he was re-arrested and issued a 6-month administrative detention order. His order was not renewed and he was released on 24 May 2012, only to be re-arrested less than two years later.

On 16 April 2014, the Military Prosecution demanded that Ofer Military Court confirm Ghassan’s 6-month administrative detention order. The prosecution accused Ghassan of being “an active member in an illegal organization, as well as being involved in “security activities” and using weapons and military equipment.” The prosecution added: “Ghassan is involved (has connections) with 8 other activists. He participated in an open public meeting that criticized the Palestinian Authority (PA) and the economic situation where 7 PFLP activists participated as well.”

Ghassan’s lawyer inquired about the nature of the activities and their relevance to the use of weapons. He also asked about the prosecution’s determination to use administrative detention and a secret file instead of issuing a list of charges. However, the prosecution did not provide any logical explanations to their claims; they said that the reasons are mentioned in the secret file and cannot be published. They also did not explain the claimed connection between Ghassan and the others that they mentioned and did not say whether they are currently detained or not.

The lawyer raised some fundamental questions regarding the arrest, including: How can participating in a conference or a public event that criticizes the PA be a charge that requires administrative detention? How does it affect the security of the occupying power? He concluded by stating that these events are open to the public and all sectors of Palestinian society participate; they are not associated with any political affiliation. Discussion and criticism are legitimate democratic rights that aim to reform and develop the Palestinian society and its institutions.

The judge, Ayal Noun, adopted the prosecution’s narrative and confirmed the order as requested by the prosecution claiming that: “they can’t take any other measure against him” and he justified his decision by saying that after examining the secret file he found the information accurate and concluded by saying that the accusations against Ghassan are all true, and Ghassan resumed political activity immediately after his release in 2008. The written decision of the judge stated: “the detainee cannot be interrogated effectively because it will reveal the methods of the intelligence.”

Ghassan’s case is a testament to the international outcry that administrative detention is arbitrary, and that the occupation uses administrative detention in cases where they fail to present actual evidence against a detainee. Ghassan’s case also highlights the punitive measures behind such a policy, especially in the absence of physical evidence to convict the detainee, in gross violation of Article (78) of the Fourth Geneva Convention. The military judge’s blanket adoption of the prosecution’s narrative shows the collaboration and conspiracy between the military judicial system, the military commander and the intelligence system against Palestinian detainees.

Ghassan Jaber’s family consists of his parents and seven siblings, yet the occupation forces forbids all of his family from visiting him except for his mother.

Ghassan’s father, Badran Jaber (67 years old) has been punished by the Israelis for resisting the occupation for years. He has been forbidden from visiting three of his sons detained in the occupation’s prisons. He was not allowed to visit his son Majd during his four years in prison, nor his son Fadi who spent  two years in prison. His punishment continues, and he is still forbidden from visiting his son Ghassan.

Denying the Jaber family from visits violates international laws and conventions, and is considered as a form of mass punishment. Article (116) of the Fourth Geneva Convention clearly states that “Every internee shall be allowed to receive visitors, especially near relatives, at regular intervals and as frequently as possible.”

Here is how you can help Ghassan Jaber:

*Write to the Israeli government, military and legal authorities and demand that Ghassan Jaber be released immediately and his administrative detention order not be renewed.

*Write to your own elected representatives urging them to pressure Israel to release Ghassan Jaber and to put an end to such an unjust, arbitrary and cruel system of incarceration without trial.