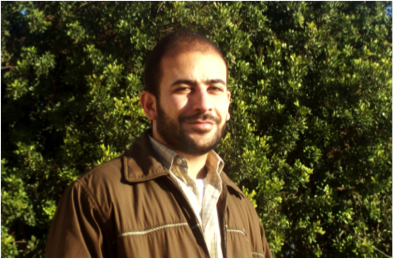 <img alt=" width=" 0"="" height="0" data-cke-saved-src="/userfiles/Tbeisheh Photo (6_10_13).png" src="/userfiles/Tbeisheh Photo (6_10_13).png">Name: Ayman Tbeisheh
Date of Birth: 20 April 1980
Date of Arrest: 9 May 2013
Residence: Khersa/Dura/Hebron
Prison: Isolation in Ofer Prison
Type of Detention: Administrative Detention
Occupation: Student at Polytechnic University/ Hebron
Marital Status: Engaged
ARREST
At approximately 1:30 AM, Ayman was arrested from his home in Dura by a large brigade of Israeli Occupying Forces (IOF). According to Ayman’s mother, there were about 8 large military jeeps that surrounded the home, and soldiers woke the family up by yelling through speakers. When the family woke up the soldiers forced them to stand in the backyard as they entered the home with a search dog. The family objected and, upon the order of an accompanying intelligence officer, the soldiers exited the house. A few minutes later, Ayman was arrested. Ayman and his family were not told the reason for his arrest, nor were they told his destination. He was then transferred to Gush Etzion settlement. Several days later, he was given an administrative detention order and was transferred to Ofer without undergoing interrogation.
PREVIOUS ARRESTS
Ayman has spent a total of 11 years in prison. He was first arrested in 1999 at the age of 19 and sentenced to 18 months. In 2001, he served 7 months in administrative detention. His third arrest was in 2003, in which he received a 6-year sentence. He served this sentence in a number of prisons and was released on 31 January 2009. He was re-arrested 9 months later, spending 3 years in administrative detention.
Upon his release on 18 October 2012, Ayman enrolled in University, and became engaged. Ayman and his fiancé agreed to have their wedding in August 2013, but before his wedding, he was re-arrested, cutting short his education and marriage.
HUNGER STRIKES
Ayman announced his an open hunger strike on 22 May 2013, immediately after his 4-month administrative detention order was confirmed in the military court. His hunger strike is in protest of administrative detention, and his detention without charge or trial based on a secret file. He considers administrative detention an arbitrary practice, particularly as he was re-arrested only 5 months after his most recent release.
According to his family, he is currently only drinking water.
Immediately after Ayman’s hunger strike commenced, the IPS transferred him to isolation in Ofer Prison and banned family visits as punishment.
During his previous arrests, Ayman engaged in hunger strikes in solidarity with Khader Adnan and Hana Shalabi and other hunger strikers.
FAMILY
Ayman’s family has suffered greatly from the Occupation’s policy of administrative detention.
His brother Mohammad (26 years old), arrested on 8 June 2012, is currently serving an 18-month sentence. Initially, an administrative detention order was issued against him, but was dropped after he was charged 3 months into his detention. He is currently serving his sentence in Ofer Prison where he saw his brother Ayman before he was transferred to isolation.
Ayman’s mother (53 years old) receives permits to visit her sons, but her advanced age, along with the fact that she suffers from a number of diseases, prevents her from visiting her sons regularly. Also impeding her ability to visit her sons is the fact that they have been transferred regularly from one prison to the other. Nearly all of those prisons are located in the 1948 Occupied Territories in contravention of international law.
ACT NOW
Here is how you can help Ayman Tbeisheh:
*Write to the Israeli government, military and legal authorities and demand that Ayman Tbeisheh be released immediately.
•   Brigadier General Danny Efroni
Military Judge Advocate General
6 David Elazar Street
Harkiya, Tel Aviv
Israel
Fax: +972 3 608 0366; +972 3 569 4526
Email: [email protected]; [email protected]
•   Maj. Gen. Nitzan Alon
OC Central Command Nehemia Base, Central Command
Neveh Yaacov, Jerusalem
Fax: +972 2 530 5741
•   Deputy Prime Minister and Minister of Defense Ehud Barak
Ministry of Defense
37 Kaplan Street, Hakirya
Tel Aviv 61909, Israel
Fax: +972 3 691 6940 / 696 2757
•   Col. Eli Bar On
Legal Advisor of Judea and Samaria PO Box 5
Beth El 90631
Fax: +972 2 9977326
*Write to your own elected representatives urging them to pressure Israel to release Ayman Tbeisheh and to put an end to such an unjust, arbitrary and cruel system of incarceration without trial.
Last Update
10-06-2013