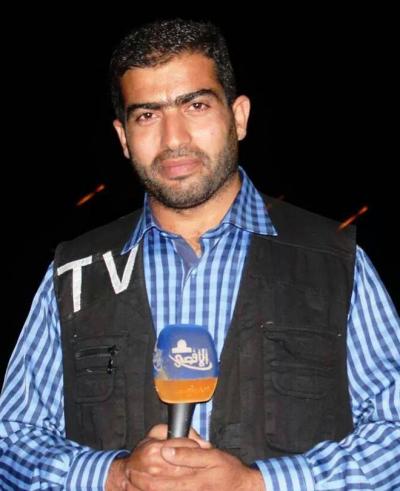 Education: BA in Media and Television

On Wednesday 21/01/2015, Alaa’s family woke up at 3:30 am to the sounds of bombing in the building they live in. Occupation forces bombed the building’s main door and raided the house of Alaa’s parents. They held all of the family members in the first floor and then tried to raid Alaa’s home, but his sister convinced them not to bomb the door so that his children would not be frightened. The soldiers entered Alaa’s house, arrested him and immediately took him to Gush Etzion Detention Center where he was subjected to quick interrogation before being transferred to Ofer prison. Alaa received a list of charges and is currently remanded until trial.

The military prosecution at Ofer presented a list of charges against Alaa Al-Titi which included two main items: affiliation with an “illegal” organization, an accusation  by the military prosecution based on the fact that Al-Titi works as a reporter at Al-Aqsa TV. (Occupation authorities claim that this channel is affiliated with Hamas, and that Al-Titi covered various stories about Hamas during his work.) The second item accused Al-Titi of providing services to Hamas (“illegal” organization) while he was working at Al-Aqsa TV.

The military prosecution deny Al-Titi his right to work freely by trying to criminalize Al-Titi’s profession as a journalist in order to prevent him from exposing the daily crimes practiced against Palestinians by occupation forces. This violates Article 23 of The Universal Declaration of Human Rights which states: “Everyone has the right to work, to free choice of employment, to just and favorable conditions of work and to protection against unemployment”. The prosecution did not mention any details about Alaa’s reports at Al-Aqsa TV to prove that he committed an offense by creating them. The prosecution also denied Alaa his freedom of expression which violates items 1 and 2 of article 19 of The International Covenant on Civil and Political Rights which guarantee every individual’s right of expressing their opinions freely and that individuals are entitled to receive, criticize and transfer information in the methods of their choice.

Al-Titi was arrested six times by the PA, and was summoned more than 30 times to be interviewed by the PA forces. The prosecution accused him of “incitement”. Each time Al-Titi was detained for a short period of time and then released. His experience with PA arrests ended when he was proven innocent after 38 hearings.

Alaa started working at Al-Aqsa TV as a reporter in 2006, but his work was interrupted by continuous arrests which forced him to work in more than one field. When he was proven innocent by the PA he was able to get back to his work as a reporter.

Al-Titi’s family consists of his wife Haya Hamad who has a diploma in business and is enrolled in Al Quds Open University to obtain a BA in English, his daughter Celine (5 years old), and his son Ahmad (3 years old). To this moment Al-Titi’s family has not been able to get a permit to visit him. The occupation claims that the permit has to go through a long “security” procedure.

Al-Titi’s family has a long history of detention; two of his brothers are currently detained and four others were released after serving their sentences.