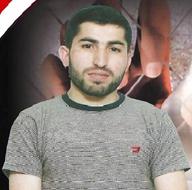 Click here for PDF.
Name: Akram Yousef Mohammad Fasisi
Age: 30 years old
Residence: Hebron-Ethna
Marital Status: Married with 4 children
Occupation: Employee in supermarket
Date of Arrest: 16 November 2012
Prison: Ramleh Prison Clinic
Legal Status: Administrative detainee
Number of AD Orders: 3 (Order expires February 2014)
Arrest
About seven military jeeps and a huge number of soldiers raided Akram Fasisi’s home in Hebron on 16 November 2012. The occupation forces threw rocks at the house to make the family open the door. They then raided the house using search dogs, and ransacked all of the family’s belongings.
After searching the house for several hours, they arrested Akram and took him to Etzion detention center. A few days later the IOF issued a six-month administrative detention order against him and he was transferred to Ofer prison after fourteen days of interrogation.
The Israeli intelligence services renewed Akram’s administrative detention order for another six months when his original order expired. Akram began an open hunger strike in protest of his unlawful imprisonment on 19 September 2013, to which the IPS and Israeli intelligence responded immediately. He was transferred to solitary confinement, which the IPS had specially equipped with multiple surveillance cameras, and has suffered numerous forms of ill-treatment.
After his health condition deteriorated twenty days into his strike at Ofer prison, he was transferred to Ramleh prison clinic. Akram refused any kind of medical examination, since Israeli intelligence had previously withheld and used prior examination results as a means of psychological and physical abuse.
Akram’s administrative detention order was renewed for another three months on 19 November 2013 while he was still on his hunger strike. According to Fasisi’s lawyer, he stopped taking vitamins ten days after the renewal order. He was transferred to Afouleh hospital just a few days before his hearing: a clear indicator of his critical health condition. He concluded his hunger strike on 26 November 2013 because of his rapidly deteriorating health
As a result of his poor health care received in the Israeli prisons and lack of access to proper medical attention, Akram renewed his hunger strike on 9 January 2014.
Previous arrests
Fasisi was previously arrested in February of 2011 by a huge force of soldiers from his workplace in Ramallah. He spent 40 days in Asqalan interrogation center where he was subjected to torture and inhumane treatment (sitting and standing in stress positions, sleep deprivation, etc.). A list of charges was issued against him and he was sentenced to a year and a half, which was served in numerous prisons. He was released in August 2012, only to be re-arrested about two months after the release.
Family
Mohammad is married with 4 children: Aya (6 years old), Yousef (5 years old), Mus’ab (2 years old), and Omar (an infant). Omar was born while his father was in prison, and they haven’t met each other in person yet.
Although his sisters were at one point allowed to visit him, Akram’s wife and his parents are denied visits for security reasons. Since beginning his hunger strike he has been denied all family visits as a form of punishment. His family is informed about his health conditions through lawyers, and they have been greatly worried especially since his transfer to the prison hospital.
ACT NOW!
*Write to the Israeli government, military and legal authorities and demand that Akram Fasisi be released immediately.
•           Brigadier General Danny Efroni
Military Judge Advocate General
6 David Elazar Street
Harkiya, Tel Aviv
Israel
Fax: +972 3 608 0366; +972 3 569 4526
Email: [email protected]; [email protected]
•           Maj. Gen. Nitzan Alon
OC Central Command Nehemia Base, Central Command
Neveh Yaacov, Jerusalem
Fax: +972 2 530 5741
•           Deputy Prime Minister and Minister of Defense Ehud Barak
Ministry of Defense
37 Kaplan Street, Hakirya
Tel Aviv 61909, Israel
Fax: +972 3 691 6940 / 696 2757
•           Col. Eli Bar On
Legal Advisor of Judea and Samaria PO Box 5
Beth El 90631
Fax: +972 2 9977326
*Write to your own elected representatives urging them to pressure Israel to release Akram Fasisi and to put an end to such an unjust, arbitrary and cruel system of incarceration without trial.
Last Update
29-01-2014