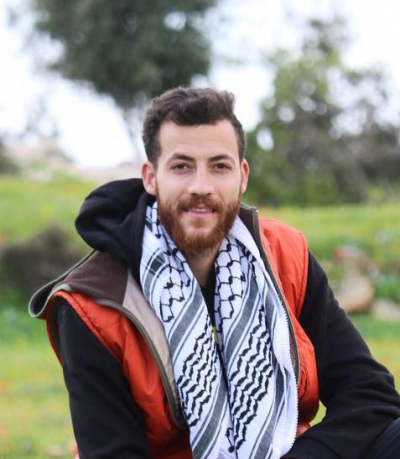 On 21 April 2018, Ahmad Awartani was orally summoned by a Preventive Security officer in Anabta after going to his father’s store. However, Ahmed told the officer that he was busy and that he would go to the Preventive Security headquarters the next morning. After a while, Ahmad was surprised to see that the same officer had returned to the store in the afternoon demanding him to come with him to the headquarters now because the “his commander” did not want to wait until tomorrow. So, Ahmad went with the officer in his own car to the Preventive Security headquarters. When he arrived, his personal items were taken; he was physically searched, and then put into a 1x2 meter cell for an hour without meeting anyone or being interrogated. He was then driven to Jericho, but was not informed of the destination. They arrived at the Preventive Security headquarters in Jericho at 8 pm. After entering the headquarters, Ahmad’s hands were cuffed to his back with iron chains, blindfolded, and screamed and threatened at to be transferred to the “slaughterhouse.” They then stopped Ahmad in the middle of the corridor, put him in a stress-position, opened his feet and kept in this position for up to five hours until he was transferred to investigation.

Ahmad entered the interrogation office where three investigators were waiting for him and informed him that he was with the “Security Committee.”[1] He was interrogated about being a Hamas activist who insulted the Palestinian Authority. The interrogator began asking him about his personal Facebook page and accused him of incitement because he posted publications conveying his support of Hamas and Hamas prisoners. This session lasted for almost three hours in which they presented Ahmad with a list of accusations and suspicions. This included his posts on “Facebook,” his participation in activities related to prisoners, and his presence in the sit-in tents. Most of the publications on his page were printed and asked about. During this session, Ahmad was taken out to the corridor, put into a stress-position, beaten on his feet that were opened every ten minutes, and then returned to the interrogation office. At the end of the first session, at 2 am, Ahmad was transferred to a cell of 170x270 meters. He remained in the cell until 7:30 am. He was then transferred to the interrogation room again and was interrogated regarding the same subjects. Also, he was asked about his support and activity for two hours before being transferred to the Attorney General in Jericho. There he was presented with an indictment that he denied, which extended his detention for 48 hours to complete the investigation so that, he could be returned to the Preventive Security Office. Therefore, he was subjected to the same inhumane treatment previously for five hours before he informed the officer that he is on a hunger strike because of the violations he is being subjected to such as, preventing him from leaving the cell, smoking, and not allowing him to call his parents or communicate with an attorney.  Then, the officer came and asked him to stop his four-day strike. After Ahmad presented his demands, he was allowed to contact his parents and was brought cigarettes, but the officer informed him that he would have to stay in the cell for a little more time.

The interrogation sessions continued with Ahmad for four days, as he was investigated due to his Facebook publications. They even went as far as going back to his posts from over three years ago. Ahmad was suspended from the interrogation sessions for 27 days because the actual investigation was completed in the first four days. After two weeks of detention in the cells, he was transferred to the rooms. However, during the interrogation period, he was subjected to several violations including different stress positions, whether it was by being put in a stress-position and opening his feet, by restricting his hands, and/or tying the chains with a nail that is hung on the wall from a higher distance than the level of his hands for long hours, along with being blindfolded. Ahmad was also beaten on his hands, feet, and all over his body after he got into an argument with a military officer. Consequently, he was deprived of taking showers and changing his clothes for a week after his arrest. Additionally, he was deprived of leaving the cell except once where he was allowed to leave it for only ten minutes. Ahmad’s detention continued for 27 days until the occupying forces decided to release him on bail of 1,500 dinars.

The Public Prosecutor’s Office in Tulkarem filed an indictment against Ahmad Awartani, which included the charge of defamation against the public authority in violation of Article 191 of the Penal Code No. (16) of 1960[2] that is enforced in the West Bank. Specifically, the prosecution said that “the accused, Ahmad Awartani, published a torrent of expressions of contempt and accusations regarding the Palestinian Security Forces of treason through his Facebook page.” During Ahmad’s trial, he was charged by the Tulkarem Magistrate’s Court, where he was represented by the defense lawyer from Addameer. After hearing Ahmad’s statement, the Court found that there was not any indication that he had insulted the public authorities. The Court announced the defendant innocent, for justice does not harm the impunity of a criminal as much as it affects the freedom of people. In conclusion, the Court decided on 2 January 2019, to declare Ahmad Awartani’s innocence of the charge he was accused of due to the lack of evidence.

On 28 January 2019, while Ahmad was on his way home from work at 12:30 am, he was surprised to find a civilian vehicle blocking his way in front of his house. A group of armed men in civilian clothes opened the car he was driving and asked for his name. They informed him that he must go with them. Ahmad asked to notify his parents of his arrest, however they refused. Even though Ahmad’s mother tried to contact him on his phone, the armed men turned off his phone and prevented him from answering her call. He was then taken to the main road in Anabta, where a military vehicle was waiting for him. They placed him inside the vehicle and chained his hands facing forward. Ahmad arrived at the Preventive Security headquarters in Tulkarem and was placed in a cell until the morning of the next day. Later on, the interrogation initiated with Ahmad. During the interrogation session, he was asked why he frequently went to the city of Ramallah and was told that he was no longer seen in his town, Anabta. The interrogators accused Ahmad of planning something. However, Ahmad argued that he went to Ramallah for work purposes and that he acquired friends who live there. The course of the investigation altered in which Ahmad was asked again about his Facebook posts, especially the publications regarding social security and why he was against it. Moreover, the interrogator asked Ahmad if he was participating in the protests that occur in the street rejecting social security and about being a Hamas activist. Once the session was over, he was returned to the cell. The next morning, the interrogator told him that he would be released on this day, after two days of arbitrary detention without any legal reason for being held. He was set free.

Between Political Arrest…and Freedom of Opinion and Expression

The arrest of Ahmad Awartani by the Preventive Security Service without any right or an issuance of a legal arrest warrant from the beginning constitutes a flagrant violation of the provisions of the Internal Palestinian Law. It goes without mentioning that all legal systems have established that the arrest procedures must be legal, so that the arrest is not arbitrary detention. Moreover, the continued detention of human rights defenders and young activists simply because of their views violates the international conventions that the Palestinian Authority has acceded to. These conventions, especially the International Covenant on Civil and Political Rights, guarantee the right to freedom of opinion and expression along with the right to acquire opinions without harassment. The Declaration on the Protection of Human Rights Defenders also guarantees this right and, in commenting on the Declaration, the Special Rapporteur regarding the situation of human rights defenders stressed that the right to freedom of opinion and expression required that States comply with positive and negative obligations. This includes refraining from obstructing the enjoyment of this right, in addition to protecting this right by working to prevent individuals or entities of private sector from harming it, as well as to penalize, investigate, and provide compensation for damages.

In the case of Ahmad, it is clear that the security services violated this right and obstructed its enjoyment, instead of committing to protecting it and ensuring its implementation, especially because the security services re-arrested Ahmad for a second time. The practices of the security services during the period of Ahmad’s detention violate the Convention against Torture and Other Cruel, Inhuman or Degrading Treatment or Punishment. Unfortunately, Ahmad was subjected to prolonged stress-positions and humiliating treatment where the officers acquired the intention of punishing him for a suspected act. This contravenes the agreement that the Palestinian Authority acceded to in 2014 and the Optional Protocol. The Court’s decision to acquit Ahmad Awartani of the charge against him highlights the extent to which state authorities have abused the use of pre-trial detention. Article 9 of the International Covenant on Civil and Political Rights states that “the detention of persons awaiting trial should not be the general rule, since the origin of the person is to be free, yet detention is an exception to the origin, and therefore, should be strictly limited. The Covenant had affirmed the suspension of the release concerning those who are awaiting trial to ensure that they attend trial. Furthermore, regarding Ahmad’s case, the charge against him and his acquittal are not of the charges that pose a threat or danger to the community. The course of the investigation would not have been affected had he been released. However, he remained in detention for almost a month during which his rights were violated. This shows how the authorities are taking the approach of disregarding the right to liberty of individuals by keeping activists and human right defenders in prolonged detention.

Ahmad… an Engineer and Youth Activist

Ahmad's family consists of six members in which three of his brothers are married. He lives with his parents and is the source of income for the family in the absence of his brothers from the house. Ahmad’s arrest negatively affected his family’s financial situation. Additionally, Ahmed graduated from Al-Najah University as a mechanical engineer in 2015. He started working as an engineer in the city of Tulkarem. He then moved to Saudi Arabia and returned to the homeland after a short period of time. He worked in a factory in Tulkarem until this day. Ahmad is deeply engaged in his community. He is a young social activist, an elected member of the Anabta Youth Council, and a volunteer with several institutions, including the Anabta Sports Club and the Wasil Youth Foundation.