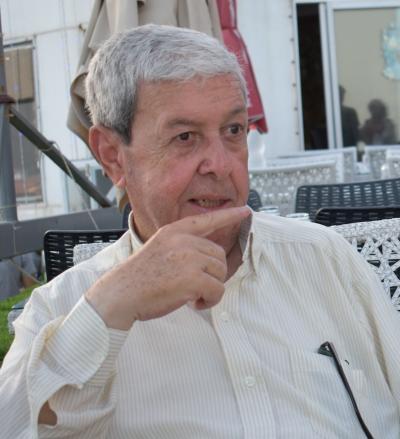 "In order to harmonize myself as a lawyer and a man of law, I see this procedure of transferring me to administrative detention, regardless of its duration, as contradicting the most basic of human rights to defend oneself and to see the charges laid against oneself, and that is in violation of international law...I ask that my defense lawyer, Adv. Mahmoud Hassan, not represent me before such courts."

Boycotting Israeli Military Courts in Protest of His Arbitrary Detention

Past Arbitrary Arrests and Detention

Bashir Khairi was previously arrested four times before his current detention, deported from Palestine for five years, spent over 17 years in Israeli occupation prisons, and was subjected to travel bans for long periods of time. Khairi was first arrested following the Israeli occupation of the West Bank and Gaza Strip in 1968, when he was 26 years old; where he was incarcerated for 15 years before being freed in 1984. Nevertheless, Khairi was arrested again during the First Intifada on 13 November 1988, and during his arrest, he was deported to Lebanon for five years before he was able to return in 1993.

Khairi’s third arrest came during the Second Intifada on 21 February 2003, when he was detained and placed under administrative detention, without charge or trial, for two consecutive years. Almost ten years later, on 29 April 2011, Khairi was arrested for the fourth time; at the time, he was almost 70 years old. During his arrest, Khairi was interrogated at Al-Mascobiya Interrogation Center for days, during which he was prevented from meeting his lawyer.

Israeli Occupation Forces (IOF) arrested Bashir Khairi for a fifth time on 29 October 2021—at the time, 79 years old—after 15 soldiers stormed his home in the middle of the night, searching the house and confiscating his car keys and phone before later returning them.

Khairi was taken to a military jeep, where IOF tied his hands and feet, blindfolded him with a piece of cloth, and transferred him to Beit El military base, where he stayed for nearly two hours. He was later transferred to Ofer prison, where he underwent a basic medical examination before being immediately transferred for interrogation. The Israeli intelligence officer interrogated him about several videos, alleging that Bashir was present and participated in public activities and events alongside others, some of whom are currently deceased. During interrogation, the officer threatened to transfer him to administrative detention if he did not confess, which is exactly what happened.

Boycotting Israeli Courts For Over 55 years…

Bashir Khairi is a retired lawyer who graduated from the University of Cairo, in Egypt, where he worked as an independent lawyer and legal advisor before the Israeli occupation of the West Bank in 1967. Alongside all practicing lawyers and judges at the time, Khairi decided to boycott all Israeli military and civil courts, leading the strike and boycott under the slogan, “We will not appear before Israeli courts and under Israeli flags.” In 1968, Khairi and several colleagues met with the Jordanian Bar Association Council to ask them to support the strike and impose sanctions against non-compliant lawyers. Since then, Bashir Khairi has continued to boycott Israeli courts to this day, and with the advent of the Palestinian Authority in 1993 and the establishment of the Palestinian Bar Association, Khairi joined the Bar and became a member of it.

Early on, Khairi realized the illegality of the Israeli courts and decided to boycott them from the beginning of the Israeli occupation of the West Bank. He did not recognize the legitimacy of these courts, both as a lawyer and as a detainee. Khairi refused his latest arbitrary detention, announcing that he would not appear before the military court for judicial review.

In his letter announcing his decision, Khairi states,

“After appearing for three sessions before the Court of First Instance and then the Appeals Court to consider the decision to release me on conditional bail, two separate decisions were issued by each of the judges, and given the intransigence of the Public Prosecution and its insistence on two options—either to not release me and refuse the courts’ opinion or transferring my file to administrative detention—this position is an attack on the judiciary and a disregard for the judges and their decisions.

In order to harmonize myself as a lawyer and a man of law, I see this procedure of transferring me to administrative detention, regardless of its duration, as contradicting the most basic of human rights to defend oneself and to see the charges laid against oneself, and that is in violation of international law that only allows for the resort to emergency regulations to apply only in cases of extreme necessity, for a period that does not exceed a year. All of this, and in front of this type of fascist and oppressive courts, I find that in order to preserve my national dignity and convictions, I refuse and will boycott appearing before any court dealing with administrative detention, and I reject any ruling issued by it. Your administrative detention rulings contradict the most basic rules of justice, transforming you from a society that went through a historical period as victims of fascism to torturers and oppressors of the will of the people, and, even, tp neo-fascists.”- Excerpt from a letter written by Detainee Bashir Khairi

Administrative Detention as a Punitive Measure

The arbitrary arrest and continued detention of 80-year-old lawyer Bashir al-Khairi point to the Israeli occupation regime’s systematic and arbitrary practice of administrative detention, which is used as a tool by the Israeli military prosecution to continue to hold Palestinian detainees even after they fail to keep them in prison, after submitting the indictment, and rare rulings for the release of the detainee on bail. Israeli occupation authorities employ administrative detention as a punitive, and even coercive, measure, rather than as a precautionary one.

This reflects a systematic policy, wherein many cases of detainees who are—rarely—released by the military court on bail, are then issued an administrative detention order against them by the Israeli military prosecution, all within a systematic practice of incarcerating Palestinian detainees in prison for as long as possible, in flagrant violation of International Law, which stipulates that arrest and detention of freedom is the last resort and that the origin of individuals is freedom and to be tried while they are free. Instead, Israeli occupation authorities almost always detain Palestinian detainees until the end of legal procedures, and arbitrarily use administrative detention to seize the freedom of Palestinians, based on a “secret file.” The arbitrary and systematic practice of detention falls under the Israeli occupation and apartheid regime’s broader framework of controlling the Palestinian people and preventing them from exercising their most basic civil and political rights guaranteed under international conventions and agreements.

Further still, Khairi’s arbitrary arrest and detention most prominently highlight the Israeli occupation regime’s systematic persecution of everyone who exercises their political and civil rights, which is illegal detention of freedom and persecution of individuals for exercising their basic rights and freedoms, which constitutes a crime of apartheid,[1] that requires the occupying power to be held accountable.

[1] See especially: “Addameer and the International Human Rights Clinic At Harvard Law School’s Joint Submission to the UN International Commission of Inquiry on the Occupied Territory and Israel,”  3 March 2022, https://www.addameer.org/news/4714