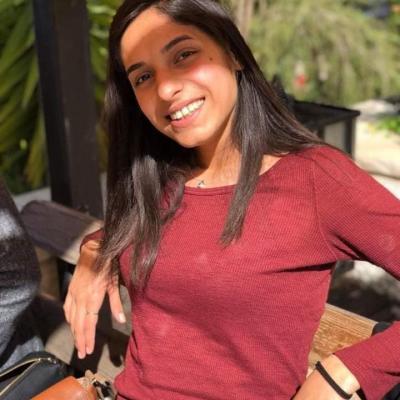 On 7 September 2019, the Israeli Occupation Forces raided the house of Samah Jaradat around 03:00 a.m. After identifying Samah, they confiscated her phone, searched the house, and then arrested her. The Israeli occupation force handcuffed her hands in front of her body using iron handcuffs, while a hood over her head was used to cover her eyes. She was transported by a military jeep where soldiers held her head down so that she could not lift it up. Samah was taken to a military compound in the early morning cold hours. She was forced to sit outside on the ground for 20 minutes, after which she was searched and taken for a medical examination. For about five hours, she was placed in a room while being handcuffed and blindfolded, after which she was taken to the transport vehicle Bosta following threats and shouting. In the Bosta, the air conditioning was switched on at a very cold temperature. She asked for drinking water, but her request was denied.

Samah was transferred to Al Moscobiyeh Interrogation Center, where she was detained for about 22 days, during which she was subjected to torture and ill-treatment.

Samah was subjected to shouting and insults by the interrogators, who examined the contents of her personal phone while she was tied to the interrogation chair. Parts of private conversations were extracted from her phone, in addition to photos, in clear violation of her right to privacy.

The interrogators threatened Samah that if she did not confess, she would be pursued after her release, and would be re-arrested several times over, with a continuation of the psychological torture inflicted on her.

Samah was deprived of sleep and rest during the interrogation period. Even when she was in her cell, she was unable to sleep, as there were knocks on her cell door approximately every 15 minutes for various reasons throughout the night.

Samah was then transferred to the collaborators’ rooms (“‘Asafir”), and she stayed there for a week, during which agents of the Israeli Occupation Forces tried, in vain, to extract a confession from her. On 28 September 2019, she was transferred to the Damon Prison.

Since the date of her arrest, Samah was denied access to her lawyer, for nearly 20 days. Seven consecutive orders were issued banning her from meeting with a lawyer, each order a renewal of the previous one. Addameer’s lawyers filed two appeals during the period of Samah’s detention and up until the end of her interrogation. Both appeals were rejected on the pretext that the interrogation was not yet complete.

On 24 October 2019, the Israeli occupation authorities submitted an indictment against Samah, which included two clauses related to her student activism at the university, as she was a member of the Democratic Progressive Student Pole, which is deemed unlawful by military orders. Samah's trial lasted for nearly 6 months. On 30 March 2020, she was sentenced to 9 months’ imprisonment and fined 3,000 NIS.

The Israeli occupation authorities released Samah on 4 June 2020, after she had spent 9 months in detention.

The Israeli occupation authorities systematically target university students, summoning and arresting students for exercising their right to unionization and activism, guaranteed by international conventions. According to statistics by the Right to Education Campaign at Birzeit University, since the beginning of the academic year 2019/2020, Israeli occupation authorities have arrested approximately 74 students from Birzeit University, mostly between August and December 2019.[1]Arrested students were subjected to psychological and physical torture and indictments were submitted against them relating to their student activities.

The Israeli occupation authorities try to portray student activism as a threat to “regional security”. Detainees are thrown into interrogation centers for long periods. Many are denied the right to meet with their lawyers, as happened with Samah. These systematic practices by the occupation seek to oppress students and intimidate them, while discouraging them from exercising their basic rights to unionization and student activism, as well as their rights to political affiliation and freedom of opinion and expression, which are protected by international conventions.

The psychological and physical torture to which Samah was subject to during the interrogation illustrates the true face of occupation, which claims democracy. Samah was isolated from the outside world, denied access to her lawyer, exposed to pressure and psychological/physical torture and ill-treatment for alleged student activism in university. The occupation authorities need to be held accountable for such crimes.

Twenty-second birthday in the cells of Al Moscobiyeh

Samah is the youngest daughter in her family. She has two brothers and two sisters. She spent her twenty-second birthday under interrogation at Al Moscobiyeh. Samah was arrested three days after her graduation from Birzeit University, majoring in sociology. She was not able to begin looking for work as she was detained in interrogation cells in a vain attempt to restrain an ambitious girl.