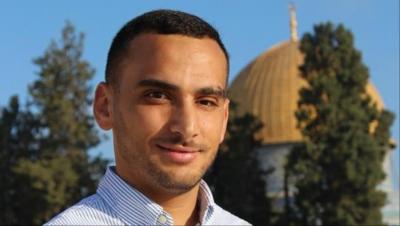 Israeli occupation intelligence officers and police had repeatedly threatened Rami al-Fakhouri with detention. A month before his wedding, another intelligence officer passed a threatening message through one of Rami’s friends, 'we're cooking a surprise for Rami on his wedding'. Three weeks later –a week away from his wedding– Rami was arrested by the Israeli Occupation Forces (IOF) and transferred to Al-Moscobiyeh Interrogation Center and Prison for a three-day round of interrogation.

The detainee was interrogated over loose accusations and then he was released. 'None of the interrogators directed clear charges', Rami stated. Just a day after the wedding, Israeli media was inundated with reports inciting the public against Rami and his father-in-law, martyr Musbah Abu Sbayeh. Two days later, news reports made the scene with clips from his wedding and photographs of Musbah and Rami together.

After the smear campaign that was launched against Rami and his family, the IOF spearheaded a sweep of detention against wedding guests, including the videographer–all the video recordings were seized. IOF also broke into about 20 homes, including Al-Fakhouri'’s. Rami’s father was detained at night to be released the next morning. The rest of the detainees were held under the pretext of supporting a terrorist organization.

On Friday, 14 November 2018–less than a month after the wedding, Rami was chased by a special military squad vehicle. The car overpassed Rami’scar and pulled right before it. Squad members hurried towards him and forced him to stop the engine, hand in his keys, and climb down the car. Rami was immediately body-searched and had his hands cuffed in front of his body as well as his feet with iron shackles. The squad then piled him into their vehicle, leaving his car across the street.

The IOF transferred Rami to Al-Moscobiyeh Interrogation Center. As soon as the detainee set foot in the Russian Compound, he was subject to a thorough body search, and thus his possessions were confiscated on the spot. He was then moved to a cell where he found some of the wedding guests. The following day, the interrogation with Rami was set in motion for ten days at a stretch. Different interrogators took turn, threatening and punishing him. Questions centered on his wedding as if it were a 'terrorist organization'. The interrogators showed Rami a footage from his weddings–it was the first time he watched it. They claimed that Hamas's banners were raised at the ceremony, and inciting songs were put on in support of a terrorist organization.

One of the interrogators informed Rami that his father, sister, and wife were arrested. Later, he found out that such false information was merely fabricated to provoke him and put more pressure on him

The IOF released the majority of wedding guests, excluding three young men in addition to Rami. The Israeli occupation authorities brought a list of charges against the latter, including an accusation of supporting a terrorist organization. At the same hearing, notwithstanding, the judge released them on the condition the trial process to be continued without detention.

At the hearing, suspicions over supporting a terrorist organization were raised against Rami. 'Democracy is safeguarded in Israel, and the raising of banners is not prohibited', the magistrate judge remarked. Thus the claims did not provide sufficient evidence for a valid charge sheet. Rami was released on 6,000-NIS bail and banished from Jerusalem for ten days on the condition that he duly appeared at the hearings.

As the family decided to pay the bail, the Israeli Minister of Security, Netanyahu, issued a renewable six-month administrative detention order against Rami. At the verdict confirmation session, the Israeli Security Service (Shabak) claimed that by marrying Musbah's daughter Rami became more dangerous. The court sustained the claim and confirmed the sentence. An appeal was lodged at the Higher Court, nonetheless, it was overruled on the grounds of secret information.

Israeli occupation authorities resort to arbitrary administrative detention whenever they fail to prove charge sheets against Palestinian detainees. Several cases showcase how such a tactic is devised to overcome court dismissals of accusations or releases on bail. Under the pretext that such detainees pose a security threat based on information that always crowds under confidential evidence–neither the detainee nor his lawyer was privy to. Cases such as Rami's unveil the formal role played by Israeli judges.

Ideally, judges have discretionary power to decide on cases, and thus release or imprison the defendant. Notwithstanding, the Israeli judicial system, particularly in al-Rami's case, appeared as if it had no power. Although the judge had thoroughly reviewed the case and then decided to release the detainee on bail, the executive power, represented by the Minister of Security, ignored and refuted the judge's claim that 'democracy is safeguarded in Israel'. The administrative detention order further demonstrates the racism embraced by Israel as an occupying power as well as its arbitrary use of administrative detention to justify suppression and punishment. This act also violates art. 78 of Geneva Convention IV on Civilians which stipulates that 'If the Occupying Power considers it necessary, for imperative reasons of security, to take safety measures concerning protected persons, it may, at the most, subject them to assigned residence or to internment'. Rami’s case does not constitute any imperative security reasons–for all that he did was exercising his freedom of expression and right to choose who he wants to marry.

Moreover, the incitement raged by Israeli occupation authorities and media against Rami violates his right to privacy by streaming the videotape of his wedding undeterred provisions of international conventions and covenants on the right to privacy. Article 17 of the International Covenant on Civil and Political Rights (ICCPR) provides, 'No one shall be subjected to arbitrary or unlawful interference with his privacy, family, home or correspondence, nor to unlawful attacks on his honour and reputation'.[1]This practice also violates article 23 of ICCPRstipulates 'the family is the natural and fundamental group unit of society and is entitled to protection by society and the State'.[2]Nonetheless, Israeli occupation authorities attributed the gravity of the detainee to his decision to marry and establish a family, exactly as stated by Shabak's claim at the verdict confirmation session.

In fact, Ramis’s case exposes the Israeli's determined violations against the basic rights of Palestinian detainees such as freedom of expression and opinion and the right to family life. It also sheds light on the formal role played by Israeli judges, and thus the primacy of the executive over the judiciary under the pretext of secret files related to fundamental rights that should be safeguarded by the Israeli democracy.

During his internment, his wife was denied her right to visit him. Only his mother and father were allowed to visit him, infrequently. Although Israeli occupation authorities released Rami on 20 June 2019, he was re-arrested again for hours and received several subpoenas, most recently on 23 September 2019. Badgering Rami after his release further shows Israeli's determination to harass and intimidate him and his family as one of the too many violations against Palestinian prisoners, released prisoners, and their families.

[1]1. No one shall be subjected to arbitrary or unlawful interference with his privacy, family, home or correspondence, nor to unlawful attacks on his honour and reputation;

2. Everyone has the right to the protection of the law against such interference or attacks.

[2]1. The family is the natural and fundamental group unit of society and is entitled to protection by society and the State.

2. The right of men and women of marriageable age to marry and to found a family shall be recognized.