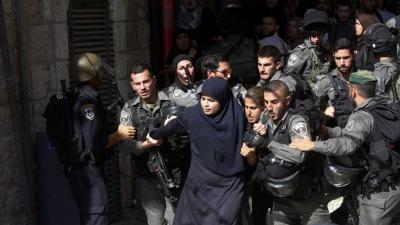 On International Women’s Day, there are 48 Palestinian females held in Israeli prisons and detention centers, including 24 mothers, 7 injured prisoners, 26 sick prisoners and 1 administrative detainee held without charge or trial. Those female prisoners also suffer from long sentences with a maximum of 16 years. All of the women are held in Damon Prison since November 2018. This prison is located inside Israel in contravention of the Fourth Geneva Convention which prohibits the transfer of the population from the occupied territory to the territory of the occupier.

Since the beginning of the occupation 50 years ago in 1967, over 10,000 Palestinian women have been arrested and detained by Israeli occupation forces. In 2019, and just like previous years Palestinian women and girls are routinely arrested from the streets, Israeli military checkpoints, and during violent night raids on their homes. Those military incursions are accompanied with the presence of Israeli soldiers, intelligence officers, and police dogs, during which destruction of household items and property damage takes place. They are blindfolded and handcuffed, and they are forcibly taken to a military jeep.

On this International Women’s Day, Addameer highlights the severe deterioration in detention conditions for female prisoners. Palestinian women suffer during the arrest itself, during the interrogation period and then in the prison. This comes from inadequate detention conditions, including food, water, hygiene, medical care, right to privacy, and right to education, or from the treatment and aggression of Israeli Prison Services’ unites especially during transfer.

Lama Khater is a journalist and a writer, she is also a mother of five children. After Lama Khater’s first interrogation session on 24 July 2018 at Asqlan interrogation center, Lama was taken to a small filthy cell without a window, which was around 2*3 meters and with a really dirty toilet and sink. The floor and walls of the room were muddy. A male soldier brought her some blankets which were not enough, the cell was too cold mainly because of an air-conditioning. Lama’s provision of food was not adequate and she suffers from sleep deprivation. A few hours later her second interrogation session began. Lama was interrogated for a total of 34 days, around 14 officers took part in her interrogation with four of them being the main interrogators. Each session used to have from 1 to 3 interrogators who used to humiliate her and insult her, her family and community.

Several women suffered interrogations in the past year, some of those women were presented with a list of charges after the period of the interrogation but others were released without charges or on bail. Most of these cases would be either woman arrested and held to pressure a family member who is already in detention or as part of the Israeli policy of collective punishment. One example is the arrest of Fayrouz Sherim who is the sister of Ashraf Na’alweh, accused of committing an attacked against Israeli settlers. Fayrouz is a university professor with a Ph.D. degree, she is also a mother of three children. She spent a total of 28 days at al-Jalameh interrogation center and then was released with having to pay 4500 Shekels (1250 USD) as bail money. During those 28 days she suffered from ill-treatment and which included harassment, humiliation, long interrogation sessions, sleep deprivation, threats, psychological pressure, medical negligence, ban on lawyer visits and she was kept in an unfitting environment for women in detention. Fayrouz’s mother was also taken to an interrogation center and then presented with a list of charges, her mother is still detained until this day.

As part of the punitive measures which followed the formation of a new committee by the Israeli Minister Gilad Erdan, detention conditions at HaSharon deteriorated. As such, in September 2018 the cameras in Hasharon prison for women began operating again after being shut off for years following an agreement between the prisoners and the administration in 2011. The female prisoners naturally rejected the imposition of the cameras, and on 6 September stopped going into the yard for their recreational time. The imposition of the cameras forced women to stop their sports routine or take off their vials. It actually prevented them from undertaking any of their regular activities, mainly because of those cameras and invasion of their privacy.

In addition to this, the female prisoners reported that there was a shortage in the provision of food, specifically some kind of vegetables and bread. Also, the quality of the meals dropped down as they reported receiving some meals uncooked, especially the rice. Other than this, the female prisoners stated that there was no provision of hot water for around two months beginning of September 2018.

Female prisons also reported that medical services were lacking, they complained from the bad behavior of the assigned Doctor at Hasharon, also the only treatment the doctor provided was to advice the prisoners to drink more water.

Shortly after, at the beginning of November 2018, all women imprisoned and detained at HaSharon were transferred to another prison called Damon. This act was done as a mean to punish the female prisoners for refusing the new punitive measures against them.

“Although subject to international law, States primarily exercise territorial jurisdiction. The obligations of States parties apply, however, without discrimination both to citizens and non-citizens, including refugees, asylum-seekers, migrant workers and stateless persons, within their territory or effective control, even if not situated within the territory. States parties are responsible for all their actions affecting human rights, regardless of whether the affected persons are in their territory.”[2]

Furthermore, Article 3(1)(c) of the Fourth Geneva Convention (1949) forbids “outrages upon personal dignity, in particular, humiliating and degrading treatment”. This happens regularly for female prisoners, particularly during transfer and strip-searching.

Testimonies by Palestinian women and girls highlight the brutality of the arrest process as well as conditions inside Israeli interrogation, detention and prison centers, and even hospitals while in custody. The abuse, ill-treatment, and torture of Palestinian women and girls take place within the context of the ongoing occupation of over 50 years and annexation of Palestinian lands. In the Convention on the Elimination of all Forms of Discrimination against women, States Parties emphasize “that the eradication of apartheid, all forms of racism, racial discrimination, colonialism, neo-colonialism, aggression, foreign occupation and domination and interference in the internal affairs of States is essential to the full enjoyment of the rights of men and women”.[3]

·         States Parties to the Fourth Geneva Convention call for an end to physical and psychological abuse in the hands of soldiers during the arrests of Palestinian women and girls and their illegal detention in occupying territory.

22-04-2021
#FreeThemAll: In Sumoud and Solidarity from the U.S. to Palestine Webinar
15-04-2021
16 Palestinian and Regional Organisations Send Joint Submission to the UN Secretary-General on Intimidation and Reprisals for Cooperation with the UN
29-04-2021
UN Experts Express Grave Concern of Arbitrary Detention of Palestinian Child Detainee