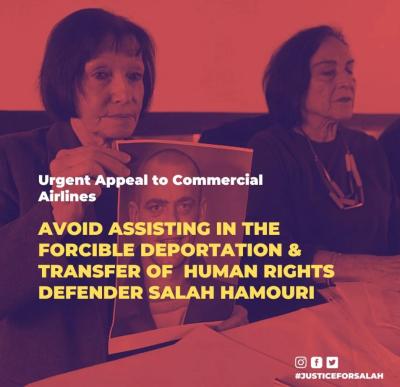 Israel has recently announced will imminently deport Palestinian human rights defender Salah Hamouri, an act which a serious violation of international law. We, the undersigned human rights organisations, commercial airlines refuse to assist in what could constitute a war crime by refusing to trans individuals undergoing unlawful forcible deportation and making a public statement to this effect.

The below document provides background to the case of Salah Hamouri, references the relevant legal obligations of commercial airlines, and sets out the practical steps commercial airlines need to take to ensure they are not contributing to serious violations of international law.

On 30 November 2022, the Israeli authorities informed imprisoned Palestinian-French human rights lawyer, Salah Hamouri, 37, that he will be forcibly deported to France from occupied Jerusalem – his hometown – for “breach of allegiance” to Israel. Hamouri has been held in administrative detention since March 2022 without charge or trial on the basis of ‘secret evidence,’ and the decision to deport him follows Israel’s revocation of Hammouri’s permanent residency status in Jerusalem.[1] Hamouri has said that he refuses deportation and will not willingly board a flight.

Hammouri’s deportation, which can take place any time from December 4, 2022, onwards, will be a escalation in Israel’s prolonged harassment and targeting of him through arbitrary arrests, travel bans, surveillance, and family separation.

In accordance with the Hague Regulations and the Fourth Geneva Convention, the protected population in an occupied territorysuch as is the case in the internationally-recognised occupied Jerusalem does not have a duty of allegiance to the Occupying Power (Israel), the basis upon which Hamouri is to be deported.[2]

According to a UN Experts’ statement on 2 December 2022:

“Such unilateral, arbitrary measures taken by Israeli authorities in retaliation against Mr. Hammouri as a human rights defender, violate every principle and the very spirit of international law

In light of the above, we strongly urge commercial airlines to refuse and refrain from assisting the Israeli authorities in carrying out its inhumane, discriminatory, and likely unlawful forced deportation of Salah Hammouri.[5] Moreover, we ask that commercial airlines running direct flights to France make a statement on their website stating their refusal to participate in any unlawful forcible deportations Israel of the population of the Occupied Palestinian Territory.

At a time when Hammouri’s family and loved ones, Palestinian and international civil society, the United Nations, and states are calling on Israel to halt his forcible deportation and transfer and for Hammouri to be able to remain in his hometown, commercial airlines review and act in accordance with the relevant set duties, namely those under international human rights and humanitarian law.

[5] Over the years, commercial airlines around the world have been increasingly demonstrating commitment by refusing to accept forced deportations of refugees, asylum seekers and immigrants. See https://www.business-humanrights.org/en/latest-news/uk-virgin-atlantic-to-stop-accepting-forced-deportations-amid-concern-over-removal-of-windrush-generation-migrants-lgbt-asylum-seekers/