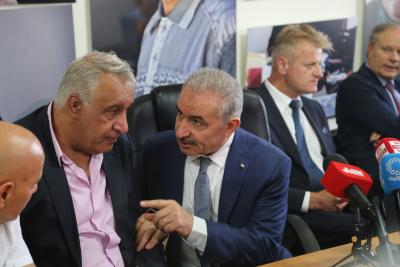 During his speech, Palestinian Prime Minister Muhammad Shtayyeh emphasized the need to challenge and confront the Israeli decision to outlaw and escalate its harassment of the six organizations, praising the role of Addameer in the field of prisoners’ and human rights. PM Shtayyeh emphasized that the visit served as a “clear message of solidarity from [the Palestinian government] and international diplomats” with Addameer and the six organizations, and praised the position of European states that came out against the decision and refused to cut funding.

The representative of the European Union in Palestine, Mr. Sven Kuehn von Burgsdorff, further affirmed his condemnation of the Israeli occupation’s designation and violent military raid of the offices two weeks earlier and confiscation of properties and files. Mr. von Burgsdorff emphasized that this visit alongside international diplomats “demonstrates our unwavering commitment to stand with [Addameer] in this very important cause of defending the human rights of the Palestinian people.”

It is worth noting that the EU and donor states have all vocally condemned the Israeli occupation’s criminalization and designation of the six leading Palestinian civil society organizations as “terrorist organizations” in October 2021, as well as subsequent escalations of this designation, including the most recent military raids. Moreover, EU and donor states have repeatedly repudiated Israeli allegations against the six organizations, stressing that they were untrue and unconvincing, affirming their continued support and funding of the organizations.

Addameer Prisoner Support and Human Rights Association welcomes this visit alongside growing voices by international institutions, State parties, and NGOs condemning the Israeli occupation’s escalating attacks against Palestinian civil society. Addameer stresses the existential threat faced by the six organizations and calls upon the international community to intervene to protect Palestinian civil society and hold the Israeli occupation accountable for its gross crimes and human rights violations against the Palestinian people.