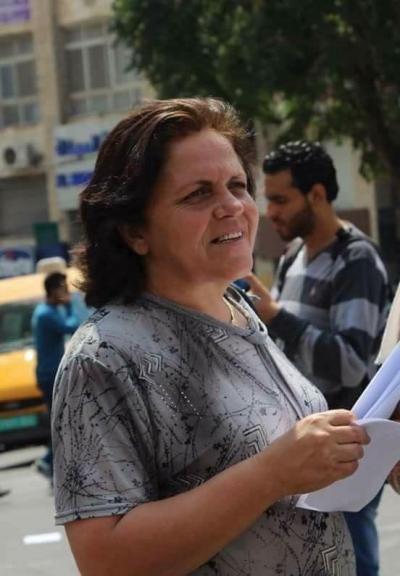 On Sunday, 13 February 2022, Ofer military court sentenced Palestinian human rights defender and President of the Union of Palestinian Women’s Committees, Khitam Sa’afin, to 16 months imprisonment after nearly 15 months of arbitrary detention, in addition to five months suspended prison sentence and a fine of 1,500 shekels. Khitam was arrested on 2 November 2020, and placed under administrative detention, without charge or trial, until the military prosecutor submitted a list of charges against her on 8 June 2021.

The long-term arbitrary arrest of Khitam Sa’afin highlights the Israeli occupation authorities' persistent efforts to incarcerate her in an attempt to coerce testimony and/or a plea bargain to more broadly criminalize Palestinian civil society organizations (CSOs). This is especially evident by her previous administrative detention based on “secret material” and later inflated charges brought against her.

Khitam Sa’afin was first arrested and held for eight months under administrative detention, without charge or trial. Prior to the beginning of her third administrative detention order, the Israeli military prosecutor submitted an indictment against Khitam on 8 June 2021, thus canceling the detention order and transferring her to pretrial incarceration, under a long set of inflated charges of acts and activities well beyond any singular, specific act carried out by Khitam. This practice is widely used by the Israeli military prosecution to extend detention and trial procedures as a punitive and coercive measure against the detainee.

During trial proceedings, the Israeli military prosecution brought charges against Khitam alleging that she held responsibility for “joint administration” with the six Palestinian CSOs most recently outlawed and arbitrarily designated as “terrorist organizations” by the Israeli occupation regime, amidst mass condemnation by UN bodies, international human rights institutions, and State parties. The military prosecution further alleged that she helped “launder money” between the organizations and the Popular Front for the Liberation of Palestine (PFLP). Most strikingly, this move not only exemplifies the practice of applying Israeli military orders retroactively to bring charges against human rights defenders and student activists, but it dangerously alludes to the imminent, and now explicit, consequences of the latest criminalization of the six Palestinian organizations, all of whom engage in critical human rights work and services in the occupied Palestinian territory (oPt).

Adv. Mahmoud Hassan, the legal counsel representing Khitam, submitted several requests to the military court to reveal the “secret material” against Khitam, in addition to the release of Khitam until the end of the legal procedures. However, the military court intentionally delayed looking into these requests, compelling Adv. Hassan to directly engage in communications with the military prosecutor. Consequently, the parties reached an agreement to amend the final list of charges to limit it to Khitam’s alleged membership in an organization deemed “unlawful” under Israeli military orders, referring to the PFLP, her participation in social and public activities relating to the aforementioned organization, and her position as the President of the Union of Palestinian Women's Committees prior to the military order outlawing the UPWC.

The criminalization of mere membership in or affiliation with a political party violates fundamental international conventions that ensure such activities are protected under the freedoms of belief and association. It also allows Israeli military authorities to detain individuals without proving–—or even alleging–—any actual individual culpability for activities or resistance against the ongoing belligerent Israeli occupation that could be deemed legitimate offenses. Such attacks and harassment are part of the Israeli occupation's aim to silence those who defend and express their opposition to the Israeli apartheid and illegal policies, at the foremost Palestinian human rights defenders.

Many Palestinian detainees plead guilty for offenses they did not commit and waive their right to continue with the judicial procedures, including hearing witnesses and examining evidence. Various factors lead Palestinian to seek a plea bargain: including the lack of faith and trust in Israeli military courts ability to provide a fair trial and a just sentence, to avoid the blatantly unfair and  prolonged military courts judicial procedures (at times reaching the end of trial procedures are longer than the detention sentence of a plea bargain), and to avoid repeated and distressing journeys back and forth from prison in Israel to the court sessions in the West Bank.

Khitam has been the President of the Union of Palestinian Women's Committees (UPWC) since 2010, a secretariat member of the General Union of Palestinian Women, and a prominent Palestinian human rights defender. Her work is well renowned at the regional and international levels. Khitam is active at the World Social Forum and a regional Coalition for Women Human Rights Defenders in the Middle East and North Africa. She has been a voice for underprivileged Palestinian women regarding social issues and believes that women's freedom is parallel to the Palestinian people's freedom. She is a mother of three and a grandmother.

24-01-2023
Commemorating the International Day of Education by Highlighting the Reality of the Right to Education for Palestinian Political Prisoners
08-12-2022
Palestinian-French Human Rights Lawyer, Salah Hammouri, is under Imminent Threat of Forcible Deportation from his Hometown Jerusalem to France
14-12-2022
Urgent Appeal to Commercial Airlines: Avoid Assisting in the Forcible Deportation & Transfer of Human Rights Defender Salah Hamouri
متوفر باللغة العربية