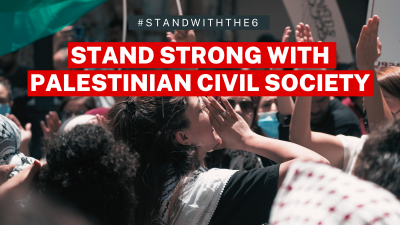 The leading human rights and civil society organizations that were declared as “unlawful associations” submitted a procedural objection demanding the decision’s cancellation; the OPT military commander announced that the evidence that allegedly establishes the declarations will remain secret.

Today, 3 February 2022, leading Palestinian human rights and civil society organizations filed a procedural objection to the Military Commander of the Occupied Palestinian Territory (OPT) in the West Bank, against the declaration of the groups as "unlawful associations", under the 1945 Emergency (Defense) Regulations. The declarations were made following the decision by Israel's Defense Minister Benny Gantz on 21 October 2021, to designate the groups as "terrorist organizations" under Israel's domestic 2016 Counter-Terrorism Law.

The organizations that objected are Addameer, Al-Haq, Bisan Center for Research and Development, Defence for Children International – Palestine, and the Union of Palestinian Women's Committees. The Union of Agricultural Workers’ Committee was declared unlawful prior to these designations, and is not a part of this particular process.

On 16 December 2021, the organizations sent a letter to the Israeli authorities demanding that they reveal all of the materials forming the factual bases of the declarations. The groups’ legal team argued that there is no justice, fairness, or due process for the organizations, without access to these materials in their entirety in order to defend themselves.

In response, the Israeli military authorities replied on 2 January 2022 that the groups would be permitted to inspect the unclassified materials while emphasizing however that the core of the designations is based on confidential intelligence information that cannot be revealed due to “security reasons”.

The objection, submitted by the groups’ legal team – The Adalah Legal Center, and the offices of Attorney Michael Sfard and Attorney Jawad Boulus - follows the Israeli authorities’ repeated refusal to reveal the alleged “evidence” against the organizations, and, as such, the objection demands a complete cancellation of the decision.

The organizations emphasized that the Israeli authorities’ declarations are a blatant and extreme violation of international law, as they deny the Palestinian people the realization of even the minimal elements of the right to self-determination. The objection also presented a long list of international criticism of Israel’s actions against the organizations, voiced both by states and by the human rights community. This criticism often referred to the declarations as an attack on Palestinian society as a whole and as an attempt to criminalize Palestinian civil society. Several states also indicated in their statements that they were not convinced by the materials presented to them by the Israeli Foreign Ministry, and that such materials did not justify the declarations.

The objection includes a detailed account of the organizations' activities and the beneficiaries receiving their services, and underscores the long history of the organizations, several of which have been operating for decades, as well asthe centrality of these groupsin the life of Palestinian society, which is suffering from prolonged occupation. Given these facts, Israel’s actions cannot be interpreted as anything other than a politically-motivated attack on Palestinian human rights defenders and “an attempt to destroy Palestinian civil society.”

CLICK HERE – To read the introduction of the objection [English]

The main legal arguments raised in the objection:

- No due process: The declarations are illegal, as they are based solely on secret evidence. The military commander announced that he will not provide the organizations with any material that will allow them to defend themselves, and thus there is a total denial of due process.

- No evidence: The military did not present evidence connecting the organizations with any illegal activities, illegitimate engagements, or misuse of funds. The groups stress that no such material has been provided because it does not exist.

- Violation of the rule of law: The Military Commander operated without authority, as his use of the 1945 Emergency Regulations is conditioned upon an order of the Minister of Defense, according to a procedure that no longer exists in Israeli law, following the enactment of the 2016 Counter-Terrorism Law.