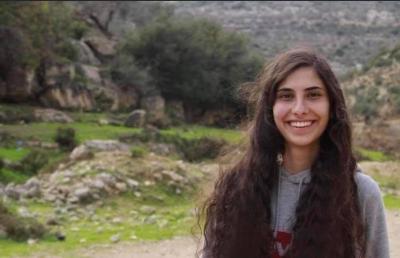 On 3 August 2021, following extended detention and interrogation, Ofer Israeli military court heard charges submitted by the military prosecutor against 21-year-old Palestinian student Layan Nasir. The charges brought against Layan target her alleged role and activities in the Democratic Progressive Student Pole, a left-bloc student organization deemed unlawful under an Israeli military order issued by the Israeli military commander in August 2020. After denying accusations presented against Layan, Ofer military court scheduled a witness hearing session on 24 August 2021. Layan’s recent arrest is one of the latest in an intensifying crackdown by the Israeli occupation regime against all facets of Palestinian society, particularly student expression and activism.

Layan Nasir was arrested on 7 July 2021, during which Israeli Occupation Forces stormed her home in the occupied West Bank town of Birzeit under pretext of detaining her for a short interrogation. She was handcuffed, blinded by a mask covering her eyes, along with one for her mouth and transported to Ofer military camp for interrogation. During interrogation, Layan exercised her right to remain silent and refused to sign any statement. In her first hearing before an Israeli military court on 8 July 2021, her detention was extended for seven days. However, Layan has not been interrogated again since her first interrogation session. She has since been transferred to and held in HaSharon Prison. On 14 July 2021, the Israeli military prosecutor submitted a list of charges against Layan. Over two weeks later, the charges were read to the Israeli military court in a hearing on 3 August 2021.

The charges submitted against Layan Nasir, a fourth-year student studying Nutrition at Birzeit University, primarily target her role and activities in a student organization banned under Israeli military orders. The military order reflects one of the over 1800 military orders issued by the Israeli occupation regime since its establishment, which seek to criminalize many aspects of Palestinians’ daily lives including the majority of student unions and political parties. The targeting and criminalization of student organizations by alleging their affiliation to “terrorist” entities violates the right of Palestinian youth to freedom of association, expression, and to form student unions.

Palestinian youth and students are systematically targeted as part of Israel’s protracted silencing campaign. Students at Birzeit University especially have been subject to systematic attacks, IOF raids, and arbitrary detention, all of which serve Israel’s ultimate goal of maintaining its occupation and apartheid regime over the Palestinian people. Beyond physical assault, many students have been further subject to torture and ill-treatment during their detention and interrogation.

Student unions, in their role representing the voices of youth, are essential elements of a democratic society. In Palestinian society specifically, youth and student unions have contributed to the mobilization of popular resistance and transnational solidarity against Israel’s apartheid regime and towards social change.[4]