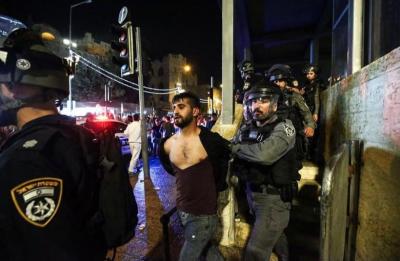 Mass Arrests and Detention Amidst the Escalation of Israeli Oppression against the Palestinian People.pdf

The past month has been marked by heightened violence by Israeli Occupation Forces against Palestinians across occupied Palestine, including: Jerusalem, historic Palestine (the 1948 occupied territories), the West Bank, and the Gaza Strip, reaching critical levels in the last two weeks. The events began at the start of the holy month of Ramadan, on 13 April 2021, when Israeli Occupation Forces stormed the outer minarets of Al-Aqsa Mosque, cutting the wires to the speakers to prevent the call to prayer, and placing metal barriers around Damascus Gate, assaulting Palestinians gathering near the gate. Further provocation was incited by Israeli settlers in the evening of 22 April 2021, who roamed the streets chanting ‘death to Arabs’ and targeting Palestinian civilians.

Parallel to this repression is the case of Sheikh Jarrah, in which the Israeli Supreme Court—illegally applying Israeli discriminatory domestic law to occupied territory—intended to hold a hearing on 10 May 2021 on the forced expulsion of eight Palestinian families, who, themselves, were already forcibly expelled during the 1948 Nakba. Escalating violence by IOF and settlers, many armed, in Sheikh Jarrah, led to calls for local and international solidarity. Such acts, in turn, spurred intensifying repression by IOF and Israeli settlers, many armed. These acts of violence include physical assault, home raids, destruction of property, firing of tear gas canisters, rubber bullets, sound bombs, and skunk water, arbitrary arrests, and even extrajudicial killings of Palestinians.

In the Gaza Strip, the Israeli occupation has carried out a devastating war, targeting civilian infrastructure and killing over 230 Palestinians, including 65 children, and 39 women,[1]in acts amounting to possible war crimes and crimes against humanity under the Rome Statute of the International Criminal Court. Still, the solidarity protests erupting across the occupied Palestinian territory, culminating in what many call the Palestinian Unity Uprising,continue to be met by repression and extraordinary violence. 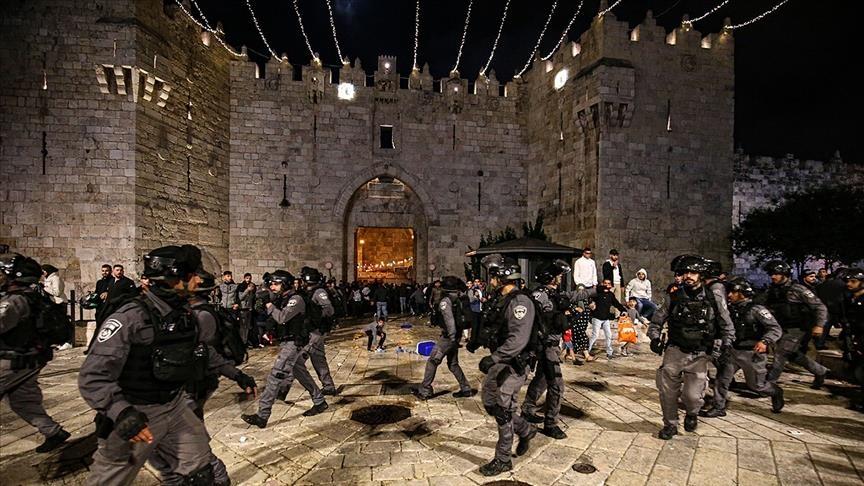 Arbitrary arrests have been a key feature of the Israeli occupation’s attempts to repress the Palestinian people’s struggle for liberty all across the occupied Palestinian territory. The statistics are staggering: since April, at least 1800 Palestinians in the West Bank, Jerusalem, and historic Palestine have been arrested and/or detained.[2]

The increased systematic practice of arbitrary detention undertaken by the Israeli occupation—IOF soldiers, police, special units, border police, secret service, and the undercover mista’arivim—is upheld by the Israeli apartheid judicial system. Violence is imbued at each state of arrest: during the repression of peaceful protests and acts of solidarity, upon arrest and transfer to detention centers, and during the period of detention and trial. These methods of arbitrary arrest and detention are central to the practices of the Israeli occupation, yet they are differentially applied geographically across the occupied Palestinian territory.

Repression of Protests, Violent Arrests and Ill-treatment during Detention

As outlined above, violence has been part and parcel to the Israeli occupation and apartheid regime. The recent escalation of violence, however, notably escalated in its aim as a blanket repression and collective punishment of all who engage in protest, self-defense, and many more. Moreover, such repression turns sites of protests, and nearby sites areas, into zones of extreme violence, with the continuous deployment of tear gas, sound grenades, rubber bullets, home raids, and physical assaults of Palestinians, including women, children, and the elderly. Amid such violence, IOF engage in a systematic practice of violent arbitrary arrest. Prior to and at the onset of arrest, occupation forces violently assault those arrested, beating them with batons and rifle butts, stepping on their heads and necks for minutes, dragging them by their hair or clothing, and deliberately slamming their heads against the ground, walls and cars.

Once arrested, occupation forces employ extreme violence against detainees during the period of transfer to, and in, detention centers. Palestinian detainees reported injuries, including heavy bruising and fractures in their feet, hands, back, and head, along with injuries in their eyes, face, and head. In detention centers, physical violence, ill-treatment, and psychological torture. Physical and psychological violence was used against detainees with mental health problems, leading to seizures and their transfer to the hospital, despite cases in which police were clearly notified by the detainees’ health issues.  Still, dozens of cases were recorded in which the police refused to transfer injured detainees to hospitals for medical treatment despite the recommendations of paramedics and their insistence on the need for immediate treatment.

The Case of the Salah Family

The violations of the occupation authorities were not limited to assault, beatings, and repression. Rather, they were accompanied by systematic, indiscriminate, and utterly arbitrary arrests. During demonstrations, IOF arrested people en masse, including those in the area or nearby neighborhoods. Moreover, there are dozens of documented occurrences in which IOF assaulted and arrested those recording and documenting the violence, including journalists.

In Jerusalem, arbitrary arrest campaigns against young men, women, and children were especially prevalent in and around the Damascus gate and Sheikh Jarrah, targeting worshippers and those present in solidarity. On 9 May 2021, on the day before the undertaking of the march to Al-Aqsa called on by Israeli settlers, occupation forces launched an arrest campaign of Jerusalemites who were previously imprisoned, and activists who were arrested after the storming of their homes, arbitrarily detaining them for a few days before releasing some. Israeli courts also issued dozens of orders of deportation from the Al-Aqsa Mosque, surrounding neighborhoods, and the Sheikh Jarrah neighborhood. These orders were coupled with dozens of additional orders of forced house arrest.

As for the arrests of Palestinians in historic Palestine, the number of arrests reached nearly 900 Palestinians, including Jerusalem. Random arrests took place in the streets and public arenas during the repression of demonstrators, as well as during home raids and attacks on families, where many children were detained. In addition to the physical violations of the rights of child detainees, many were subject to threats, prevented from access to legal advice and/or interrogation in their mother tongue, as well as being interrogated for prolonged hours at night.

In the occupied West Bank, a campaign of arbitrary arrests beginning on 4 May 2021 and intensifying on 12 May targeted freed prisoners, activists, and politicians. On 12 May alone, nearly 60 Palestinians, including journalists, activists, leaders, and candidates for the Legislative Council had their homes stormed, families attacked, and were arrested. The majority of them were former political prisoners. At least 25 of them were transferred to administrative detention without charge or trial. Among those held in administrative detention are 4 Palestinian women from the West Bank, including a mother and daughter, as well as a number of children, including a 16-year-old from Hebron.

The practices of the Israeli judicial system clearly point to an apartheid system in which two separate, racist legal systems governing Jews and Palestinians, including those who hold Israeli nationality. These practices begin with the impunity given to Israeli settler violence pre-arrest—as opposed to the wide-scale arrests and assault on Palestinians—and continues prominently in the apartheid judicial system.

Despite clear acts of violence and provocation, Israeli settler violence is afforded impunity and protection: this is best captured by the event on 22 April 2021 in which Israeli settlers, including those affiliated with the Israeli far-right group Lehava, roamed the streets chanting ‘death to Arabs,” throwing rocks and attacking Palestinian cars, homes and business. According to the Palestinian Red Crescent, 105 Palestinians were wounded, 22 of whom were hospitalized. Nevertheless, occupation forces arrested 50 Palestinians, accusing them of “violence.”

The existence of two different legal systems for groups living in the same area, highlighted by the escalation of recent events, clearly consecrates the Israeli apartheid regime, whether in Jerusalem and the 1948 occupied territories, or in the West Bank under the military regime. Official statistics, taken from the Israeli Public Prosecutor’s Office, indicate that the occupation forces have arrested 1160 Palestinians in Jerusalem and historic Palestine from the start of the events, most of whom were released with or without stipulations, while indictments were submitted against 155 of them. 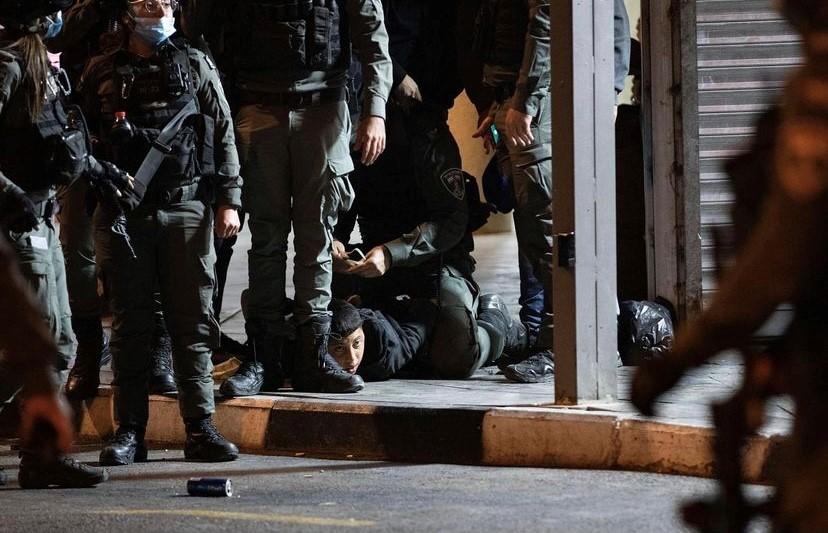 The indictments submitted against Palestinian detainees centered on charges of incitement to “murder Jews,” incitement to “terrorism,” “obstruction of police work,” and other racially-motivated changes aimed at the intentional portrayal Palestinian detainees as violent and racists committing ideologically-motivated activities. Notably, Israeli judges refused to address physical evidence of assault and beatings evident on the detainees’ bodies. Conversely, occupation forces arrested 159 Israeli Jews, and released most of them. The Israeli Prosecutor’s Office submitted indictments against only 15 Israeli Jews, including charges related to stone throwing and attacks on Israeli press crews covering events.

Moreover, Israeli courts imposed arbitrary release conditions against Palestinian detainees, such as house arrest, deportation from certain neighborhoods, and a ban on participating in demonstrations.  The majority of detainees, especially in Jerusalem and historic Palestine were released through high fines and signing financial guarantees, or by forced transfer to home arrest. The release of most of the detainees without charges highlights the arbitrary nature of mass arrests of Palestinians, which are rather aimed at harassment and repression of Palestinians. Meanwhile, the majority of the detainees in the West Bank are still in detention, where, in addition to the aforementioned violations, they are subjected to fair trial violations by the Israeli military occupation judicial system.

In conclusion, the practices of the Israeli judicial system, at the onset of arrest, then upon detention and release, demonstrate systematic practices of racism and the existence of dualing legal systems that characterize the Israeli apartheid regime. Palestinians, including those who hold Israeli nationality, are subjected to racism, false charges, arbitrary house arrests and deportation bans, along with physical assault and ill treatment. Israeli settlers, on the other hand, are afforded impunity and light sentences even as they commit crimes of assault, destruction of property, and murder of Palestinian civilians.

The Case of Mariam Afify

Addameer Prisoner Support and Human Rights Association urges the international community to abide by its moral and legal obligation to uphold the protection of Palestinian human rights and end its continuous silence against the Israeli apartheid regime. Now is not the time for statements of condemnation and silence, it is time for affirmative action and accountability of Israel’s grave breaches of international human rights and humanitarian law.

[2]Addameer collected these numbers in accordance with Addameer’s documentation unit and coordination with local civil society groups. Please note that these numbers are rapidly changing by the hour, and are not a complete count of arrests and detentions across the occupied territory.