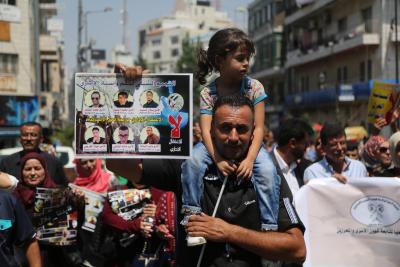 Mahmoud Al-Balboul has been on hunger strike since 4 July 2016. 22-year-old Mahmoud Al-Balboul, who is from Bethlehem, studied Psychology at Al-Istiqlal University. Prior to his arrest, he was enrolled in a Master’s Program at Birzeit University. He was also a first lieutenant and worked in the Office of Policy Guidance in Bethlehem. Mahmoud was subjected to physical abuse by prison guards during his hunger strike. He was transferred to Assaf HaRofeh medical center following deterioration in his health condition. Mahmoud has lost consciousness for a number of minutes, and currently is in the Intensive Care Unit.

Mohammad Al-Balboul has been on strike since 7 July 2016. 25-year-old Mr. Al-Balboul is from Bethlehem and works as a dentist. In 2008 Mohammad, who was 17-years-old at the time, was placed under administrative detention for one year and two months, including two months under isolation.

The occupation forces arrested Mohammad as well as his brother Mahmoud Al-Balboul on 9 June 2016 and immediately placed them under administrative detention. The military commander issued a 6-month administrative detention order against Mohammad. While he was on hunger strike, Mohammad was subjected to physical abuse by prison guards. Mohammad was transferred to Assaf HaRofeh medical center after deterioration in his health condition. He was transferred to the intensive care unit last week.

Mohammad Al-Balboul was visited by Tareq Barghouth (from the Palestinian Commission for Prisoners’ Affairs) yesterday (5 September 2016). At the visit, Mr. Barghouth learned that Mohammad Al-Balboul had lost sight and that he continues to consume only water, and that he refuses to take any vitamins or supplements. As a result of this deteriorating condition, the medical staff have decided to forcibly treat Al-Balboul if his health condition continues to worsen.

After Mohammad and Mahmoud Al-Balboul began their hunger strikes, the Israeli Prison Service placed them in two different cells where they were searched on a daily basis.

Additionally, administrative detainee Malek Al-Qadi has been on hunger strike since 15 July 2016. Prior to his arrest, the 20-year-old was a Media Student at Al-Quds University. As reported by his Attorney Ahlam Haddad, he was transferred on 31 August 2016 to the Intensive Care Unit in Assaf HaRofeh following his deteriorating health condition. Al-Qadi is also in difficult health condition, according to his attorney Ahlam Haddad. He suffers from general weakness, refuses to consume anything other than water and salt, and has lost significant body weight. Al-Qadi was beaten on his chest and stomach by a prison guard on 30 August 2016. The Ethics Committee in the medical center has decided to forcibly treat him, despite his refusal.

PHROC and the Palestinian Commission for Prisoners’ Affairs affirm concluding observations of the United Nations Committee Against Torture (CAT), 13 May 2016, which called on the Israeli government to “[t]ake the measures necessary to end the practice of administrative detention and ensure that all persons who are currently held in administrative detention are afforded all basic legal safeguards.” In light of recent individual and mass hunger strikes in protest of this arbitrary detention without charge or trial, PHROC and the Palestinian Commission for Prisoners’ Affairs call for administrative detention, as practiced by the Israeli authorities, to be recognized as a form of psychological torture that should be prohibited in line with the UN Convention Against Torture. We furthermore call upon the international community to fulfill their obligations towards protecting human rights and enforcing the implementation of international humanitarian law, particularly in times of grave violations in times of war and occupation.