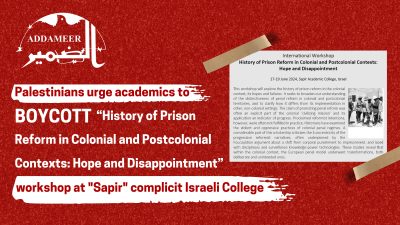 Proposals for the academic workshop are due in October 2022. The workshop is due to take place between 17 and 19 June 2024.

Sapir College, the host of the academic workshop on “History of Prison Reform in Colonial and Postcolonial Contexts: Hope and Disappointment,” is located in the Naqab (Negev) desert near Sderot - a city founded on farmland belonging to an ethnically cleansed Palestinian village called Najd. It is also less than 2 miles from the Gaza border - a place regularly described as an open-air prison due to the illegal and inhumane 15-year siege imposed by Israel. The Gaza Strip’s population of over 2 million Palestinians, predominantly refugees, are deprived of basic necessities, such as clean water, employment, reliable electric power, as well as adequate housing, healthcare, and education.

In August this year, Israel committed yet another massacre on this besieged Palestinian population, leaving 49 dead, including 17 children, and hundreds injured.

This grim reality facing Palestinians in Gaza is part and parcel of Israel’s regime of settler-colonialism and apartheid. Leading human rights organizations, such as Amnesty International and Human Rights Watch, as well as Israeli NGO B’Tselem have confirmed that Israel is perpetrating the crime against humanity of apartheid against the Palestinian people. Palestinian experts and Palestinian organizations have been saying the same for decades.

Not only is the location of the workshop problematic, but so too is its hosting in a complicit Israeli college. Israeli higher education institutions have long played a role in planning, implementing, and justifying Israel’s occupation and apartheid policies while maintaining a uniquely close link to the Israeli military and security apparatus. Much of Israel’s military arsenal and doctrines are developed in deep collaboration with Israeli universities. There is also institutionalized racial discrimination against Palestinians throughout Israel’s education system, including higher education institutions.

Sapir College, for example, recently launched a collaboration with the Israeli military’s cyber unit, which has a mutually dependent relationship with the shadowy Unit 8200. Between them, these two military units develop cyber weapons, perform mass surveillance on Palestinians, and monitor social media with the goal of collecting personal information to entrap and coerce Palestinians. Veterans of Unit 8200 have gone on to found notorious cyber weapons companies, including NSO Group. NSO Group developed the Pegasus spyware, denounced by leading international human rights organizations as being used by authoritarian regimes around the world to target human rights defenders, lawyers, journalists, politicians, and diplomats. Sapir College states that the collaboration will give students “the skills they need to serve in the Cyber Defense Division and other elite IDF technological units.”

To add insult to injury, the topic for the workshop is particularly offensive and predictably colonial. Incarceration, after all, is a key tenet of the Israeli settler-colonial and apartheid regime. Hundreds of thousands of Palestinians have been incarcerated in Israeli jails since 1967. Currently, there are over 4,450 Palestinian political prisoners, and 723 are being held under administrative detention - meaning they are being detained without trial or charge. Administrative detention orders can be renewed indefinitely, and detainees never have an opportunity to see the “evidence” against them. Those in administrative detention include four children, two women, and three Palestinian Legislative Council members.

In addition to mass incarceration, the Israeli regime also routinely employs physical and psychological torture, along with degrading and inhumane treatment, despite the absolute prohibition of torture under international law. Such practices escalate during interrogation to include physical assaults, beatings, positional torture, and psychological torture. Torture and/or ill-treatment persist beyond interrogation and throughout Palestinian prisoners’ incarceration in Israeli prisons and detention centers.

Additionally, the conditions of Israeli jails are particularly extreme and include overcrowded, narrow prison cells that lack the basic standards of adequate living conditions. To further exacerbate the prisoners’ suffering, Israeli authorities conduct repeated violent raids of repression carried out by special units that assault and terrorize the prisoners, especially child prisoners.

As the former South African Archbishop Desmond Tutu said: “If you are neutral in situations of injustice, you have chosen the side of the oppressor.”

We urge academics across the world to stand on the side of justice and refuse to attend Sapir College’s workshop on “Prison Reform in Colonial and Post-Colonial Contexts: Hope and Disappointment.” There is no hope under apartheid, only disappointment.