Joint Report: Occupation Forces Arrested 3500 Palestinians during the First Half of 2018 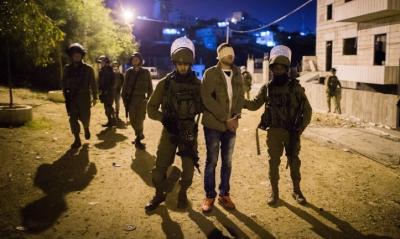 Ramallah/ Gaza :  The Occupation forces arrested 3533 Palestinians since the start of 2018 until June 30, including 651 children, 63 women, and 4 journalists.

In regard to the policy of Administrative Detention, there were 83 orders issued this month by the occupation. Of the 83, 36 were new with the remainder being renewals.

The Israeli Prison Service continues to deny the prisoners their right to adequate medical care. From the beginning of 2018, Palestinian human Rights organizations working on prisoners issues have documented several cases of medical negligence in israeli prisons that eventually lead to severe complications.

One instance of such neglect is the case of Hassan Al-Tamimi. Al-Tamimi is an 18 year old ex-prisoner who was released at the end of May 2018. Due to acute medical neglect, Hassan lost his sight. This was a result of his being denied proper medication for his liver and kidney issues,  and the jail not meeting his need for a strict diet. Without these, Hassan is at risk of death. In the same regards, and because of the same policy, 2018 has witnessed several cases of severe complications affecting individuals with cancer. These include the case of Yaser Rabia from Bethlehem and Rajai Abd-alQader from Deir Ammar.

Yaser Rabia, who is serving a life sentence, suffers from a tumor in his intestine and is still waiting for a surgery to remove it. In the case of Rajai Abd al-Qader, who is currently serving a 45 month sentence, the prison administration hasn’t provided him with anything but pain killers since he was diagnosed with cancer in both his lungs and liver.

The above-mentioned organizations reported that around 30 prisoners have been diagnosed with different stages of cancer. Those 30 prisoners are part of a larger prison population, who are suffering from the policy of medical neglect. Such neglect includes delaying treatment and check-ups, and providing prisoners with incorrect or insufficient medications.

It’s worth noting that 61 prisoners have died inside the prison cells due to the medical  neglectance policy since 1967.

The organizations documented 4 prisoners’ deaths in the first half of 2018, making the total number of prisoners who died in israeli prisons 216 since 1967.

One of those cases was that of Yassine Omar al-Saradeeh, a 33 year old from Jericho. He died a few hours after his arrest on the dawn of thursday, 2 February. A video of his arrest showed IOF soldiers brutally attacking Al-Saradeeh. The autopsy report later revealed that he was killed by a bullet, which lodged below his stomach and was shot from zero distance. The report also showed a broken pelvis as well as bumps and bruises all through his head, neck, chest, and shoulders area.

The report mentioned the case of Mohammad Abd Al-kareem Marshoud, a 30 year old from Balata refugee camp east of Nablus. Marshoud was shot by an israeli settler on April 8 2018 near Maale Adumim illegal settlement east of Jerusalem. He was severely injured, then arrested and transferred to Hadassa Ein Karem hospital, where he lost his life on the evening of the following day.

Mohammad Subhi Asmar Anbar, a 44 year old detainee from Tulkarem refugee camp, was shot in front of Jbara military checkpoint near Tulkarem. He was then arrested and  transferred to Meir hospital. Anbar eventually lost his life, after few days, on April 8 2018. Upon physical examination, the report shows the cause of death to be ruptures in his intestines and arteries as well as blood poisoning.

Another instance of death is the case of Aziz Awisat, a 53 year old from Jerusalem, who was brutally assaulted and attacked by his jailers at Eshel prison. The assault resulted in a stroke at Ramleh prison clinic on May 9.  He was transferred to Assaf Harofeh Medical center where he lost his life on May 19 2018.

After these 4 deaths, the report notes that the total number of prisoners deaths since 1967 have increased to 216. Of this figure, 73 died as a result of torture, 61 because of the policy of medical neglect, and 7 were killed as a result of direct shooting by the guards and/or jailers in prisons.

The occupation have continued with their systematic policy of holding dead bodies captive under several justifications. Currently, they are holding a total of 253 corpses, including 24 new bodies since October 2015. Among the detained bodies are Aziz Awisat, Mohammad Anbar, Mohammad Marshoud, Misbah Abu Sbaih and many more.

On March 3 2018, the general authority in the Knesset ratified a draft for a law that was put forward by the Public Security Minister Gilad Erden. That law gives the occupation the right to hold Palestinian bodies, and to place strict conditions on funerals for martyrs. The conditions may include, but are not limited to, restricting the number of participants in the funeral, controlling who can attend and who can’t, controlling the route of the funeral, deciding when it’s going to be held, and deciding the material allowed to be used during funeral. In some cases, the law also grants the occupation police and authority the right to determine the place of burial as well as fining the people in charge of the funeral.

Omar kiswani was arrested from the campus at Birzeit University on March 7 2018 at around 4 pm. During his arrest, Kiswani was assaulted by 5 special unit members. Additionally. he was tased, and kicked in the head, back, face.

Kiswani also reported to Addameer’s and the Palestinian Prisoners club lawyer who visited him in Ofer  that he was brutally assaulted during transfer both physically and verbally. During his transfer he was handcuffed using plastic cuffs and blindfolded. He was left on the ground for 15 minutes before he was transferred to another military camp, the location of which he was unable to identify. In that military point, he was left outside in the cold.

As soon as Kiswani reached  Al-Mascobiyeh interrogation center at 10 pm he was sent to interrogation.  After the interrogation session he was moved to a small cell (2*2 meters) where he found a mattress on the floor, a blanket, and a hole to use as a toilet. The place had a bad smell and was freezing cold.

After a week following his arrest, the occupation forces brought Kiswani’s mother to Al-Mascobiyeh. When  he knew she was present in an interrogation room, he ended up admitting to all the israeli claims and charges. A long series of interrogations followed, which included severe sleep deprivation. In response, Kiswani went on a hunger strike lasting for 13 days.

During all the interrogation sessions Kiswani’s hands were handcuffed to the back of the chair, with sessions lasting up to 20 hours straight. Kiswani was also denied his right to talk to see a lawyer up till March 26 2018. When interrogations concluded, he was sent to Ofer Prison near Ramallah.

It’s worth noting that the testimonies taken under these illegitimate circumstances are accepted in the occupation courts and are used against the detainee on the day of trial. These policies directly conflict with international law, including article 2 (1) from the UN Convention Against Torture, that was signed and ratified on October 3.1991. Even Though the right to be free from torture is an inalienable right, and does not include exceptions, the occupation  keeps breaking international laws and treaties each and every day by using various dehumanizing methods of torture in plain sight without being held accountable.

On February 2018, the administrative detainees announced that they will be boycotting  all court proceeding regarding administrative detention. As of today, the boycott continues, with 430 having boycotted court proceedings for the whole period. In response, the guards, the courts, and the prosecutors are seeking to force individuals to attend and participate in the legal charade.