On the occasion of Prisoners’ Day 2017 and 50 Years of Military Courts: PHROC Calls for International Protection of Palestinian Political Prisoners 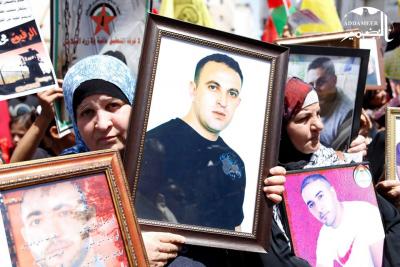 On the occasion of Palestinians Prisoners’ Day, 2017, the year that marks 50 years since the establishment of the military courts which routinely charge and trial Palestinian civilians, including children as young as 12 years old, the Palestinian Human Rights Organizations Council (PHROC) calls for international protection of Palestinian political prisoners, an end to ongoing collective punishment by Israeli occupation forces, administrative detention, continued denial of fair trial, and illegal transfer and deportation of detainees. Since the occupation of 1967, an estimated 800,000 Palestinians, roughly 20% of the population, have been imprisoned by the occupying authorities. On this year’s Prisoners’ Day, Israel holds approximately 6300 Palestinian political prisoners, 300 children and approximately 56 females (including 13 female children) as well as an estimated 500 Palestinians in administrative detention (including 2 children), held for indefinite periods without charge or trial.

This year marks 50 years of torture of Palestinian political prisoners through a military system which has historically been endemic and various forms of physical and psychological torture and ill-treatment, including beatings, kicking, insults, being forced into stress positions, sleep deprivation, isolation and solitary confinement, threats of sexual violence, and threats of arrest of family members  continue to date. Furthermore, they have been systematically denied the right to a fair trial, as well adequate health care, access to education, and the right to family visits. Palestinian prisoners and detainees also continue to suffer from a policy of deliberate medical negligence, as well as poor prison conditions, including overcrowding, unsanitary conditions, and being kept in extreme temperatures.

The issues of prisoners transcends one of individual human rights; it is also one of collective rights of an entire people – the Palestinian people, who continue to be deprived of the right to self-determination and sovereignty – basic fundamentals of international law. All Palestinian political prisoners – regardless of their alleged political affiliations or charges – are entitled to fair trial guarantees by international human rights laws.

While Palestinian prisoners are about to launch a hunger strike to end Israel’s ongoing violation of Palestinian prisoners human rights, including its rejection to fulfill its obligations in accordance to provisions of third and fourth Geneva conventions, the international community is asked to fulfill its responsibility through tangible and practical measures to ensure the protection for prisoners legitimate struggle and human rights.

PHROC therefore calls on the International Criminal Court to immediately open an investigation into the case of Palestinian prisoners and detainees, and bring those who have tortured, extrajudicially executed, forcibly transferred, and arbitrary detained Palestinians to be held to accountable.