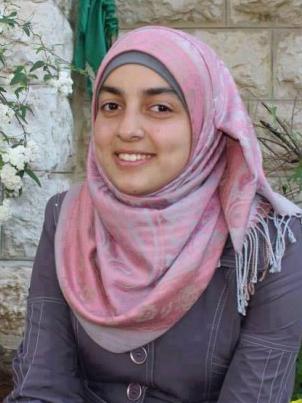 Asma Qadah was arrested while she was passing by Za'tara military checkpoint south of Nablus on the 19th of December 2015 at 8:00 am. Asma was  heading from her home in Nablus to Birzeit University.  The occupation forces stopped the taxi that Asma was travelling with, and after verification of her identity, the soldier told her and she is under arrest. Asma was handcuffed with her hand behind her back and was kept at the checkpoint until 3:00 pm. She was later transferred to Hasharon Prison, and was handcuffed and blindfolded all the way to the prison. According to Addameer’s attorney, who visited her in the Damon prison on the 25th of January 2016, two days after her arrest, Asma was transferred to Ofer prison for interrogation, which lasted for about an hour.

On the 22nd of December 2015, the military commander issued an order requiring the administrative detention of Asma for three months, starting from 22 December 2015 and ending on 18 March 2016. In the judicial review hearing before a military judge in Ofer Military Court on 27 December 2015, the judge confirmed the administrative detention order for the entire duration, claiming that Asma was a member of the Islamic bloc at Birzeit University (which is one of the political fractions at Birzeit University), and that the Islamic bloc belongs to Hamas, which is deemed a terrorist organization by military orders of the occupation, and that Asma participated in different activities against the security of the region.

Asma Qadah was accused of participating in pro-terrorist activities during the student council elections at  Birzeit University. Despite the lack of a serious investigation into the accusations directed against Asma, the judge also refused to reveal any of the information within the secret file, which Asma’s detention is based on.

The detention of Asma also constitutes a violation of the International Covenant on Civil and Political Rights, which gives the right of any individual to form and join trade unions, and highlights clearly how the occupation targets systematically students of Palestinian universities, in an attempt to criminalize the work of student union within the university, and this was evident in the response of the military prosecutors that the secret file include information indicates that Asma carried was involved in alleged terrorist activities at the university.

The appeal hearing was held on the decision of administrative detention on 10 February 2016, before the military judge dismissed the appeal on the decision, arguing that the secret information is from reliable sources and demonstrates the risk that Asma poses on the public security, and that the administrative detention was taken in order to prevent the occurrence of any future risk to the public security.

Academic Excellence and a Postponed Graduation:

Asma is a fourth-year student in the Faculty of Arts at Birzeit University, specializing in English Language. Asma is considered one of the best students in that faculty, and was supposed to finish her bachelor's degree and  wear her  graduation gown in July 2016. However,  the occupation and the administrative detention order postponed her dream as well as her graduation.

Asma’s has four sisters and one brother, in addition to her mother and her father. Her father Abdul Hakim Qadah was arrested by the occupation forces a day before she was arrested and currently he is located inside Megiddo prison after the military prosecutor provided a list of accusations against him which relate to his allegedly belonging to an ‘illegal organization.’

The family has not been able to visit the father nor daughter, allegedly for security reasons. This is part of the collective punishment policy practiced by the occupation authorities against Palestinian detainees and their families, where they are prevented from obtaining permits to enter the territories occupied in 1948, in which the majority of Palestinian prisoners are illegally transferred to in contravention with international law.