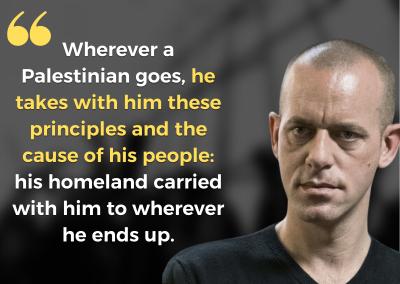 On the morning of Sunday, 18 December 2022, Israeli occupation authorities enacted the final step of residency revocation and unlawfully forcibly deported French-Palestinian lawyer, Salah Hammouri, exiling him to France. Such a move constitutes a war crime of forcible deportation of a protected civilian from the occupied territory, as defined in Article 49 of the Fourth Geneva Convention. More importantly, it stands as a horrifying escalation of Israel’s systematic practice of demographic engineering and ethnic cleansing of Palestinians from occupied Jerusalem.

Though Israeli authorities alerted the French Ministry of Foreign Affairs of Salah Hammouri’s scheduled deportation date days before, Salah himself and his legal counsel were not notified of the event until it began. Salah was directly transferred from pre-deportation detention in Hadarim prison to the airport, shackled by his hands and feet and accompanied by three Israeli intelligence agents. He was then boarded onto an Israeli national airline flight, El Al, flying to Charles de Gaulle airport. Throughout the brutal journey, Salah remained shackled and monitored by the Israeli agents until his arrival in France. Notably, prior to Salah’s deportation, dozens of human rights groups signed a joint appeal calling on commercial airlines to refuse to assist Israeli authorities with the illegal forced deportation in accordance with relevant set duties under international law. That Israeli authorities chose to deport Salah via their own national airlines demonstrates the integrated nature of the Israeli apartheid regime, in which Israeli institutions and companies play a crucial role.

Salah Hammouri’s forcible deportation is only the latest of Israel’s long-standing persecution of himself, his family, and his critical human rights work advocating for Palestinian political prisoners. Because he refused to stay silent, Salah has been the prime target of Israel’s policies of intimidation and repression of Palestinian human rights defenders challenging Israel’s apartheid regime of institutionalized racial domination and oppression. This includes repeated arbitrary arrests and detention—including years without charge or trial—beatings, family separation, spyware attacks and surveillance, and most recently, the stripping of his permanent residency rights in Jerusalem under illegal “breach of allegiance” laws.

The forcible deportation of Salah Hammouri, the final act to his residency revocation and forced exile from his homeland, only further exemplify the apartheid nature of the Israeli regime. During the proceedings, Salah exhausted every remedy available in the Israeli political and legal system, only to be met by racist rulings that operate under the pretense of the law but exist in reality to maintain Israel’s racial domination over the Palestinian people. Israeli authorities' perversion of ‘legal’ processes to apply its illegal rulings is ironically evident by their issuing of a temporary Israeli travel document for Salah—who no longer holds a Jerusalemite ID and was not in possession of his French passport—to be able to forcibly board him on the El Al flight and deport him to France.

Salah Hammouri’s case establishes a dangerous precedent for the Israeli occupation's escalation of residency revocation and arbitrary administrative detention without charge or trial. For over a decade, Salah has faced a persecution campaign aimed at his forced departure from his hometown of Jerusalem, beginning with his first imprisonment and through repeated arrests and systematic harassment afterward. His most recent arrest, on 7 March 2022, was under administrative detention without charge or trial. The Israeli military commander issued the first order for three months and later renewed it twice, to expire on 4 December 2022. This arbitrary detention proved to be a psychological form of torture and a coercive tool to forcibly deport Salah Hammouri in spite of the then-ongoing legal procedures challenging his residency revocation.

Residency policies embedded in Israel’s regime of racial domination and oppression are designed to maintain an ever-present precarious legal status for Palestinians in Jerusalem to gradually expel the native population and uphold an Israeli-Jewish demographic majority in the city. Such practices are explicitly illegal under international law, specifically International Humanitarian Law and the Fourth Geneva Conventions governing foreign occupations, and constitute a war crime under the International Criminal Court Rome Statute (ICC). To this effect, on 16 May 2022, the Center for Constitutional Rights (CCR) and the International Federation for Human Rights (FIDH) submitted a communication to the ICC Office of the Prosecutor (OTP) on behalf of Salah Hammouri, detailing the years of persecution and new tactics to forcibly transfer Palestinians from occupied Jerusalem in the context of the ongoing investigation into the Situation in Palestine. Salah’s case was also highlighted by the UN Human Rights Committee in March 2022 in its fifth periodic review of Israel on its implementation of the International Covenant on Civil and Political Rights (ICCPR).

Salah’s expulsion, amid Israel’s broader apartheid policies, is possible due to the complicity of states and companies that provide the apartheid regime with the necessary political, economic, and military support despite its gross breaches of international law. This is evident in France’s failure to use any of the leverage at its disposal in order to prevent the war crime of forced deportation of protected persons and persecution of one of its own citizens. Instead, French president Emmanuel Macron stood in the stands of the World Cup finale, cheering on the multi-ethnic French national team to bring the trophy home, while Palestinian-French Salah Hammouri was cruelly exiled from his homeland.

Through his forced deportation and exile, Salah will be reunited with his wife and children, who have already suffered the cruelty of forced separation and deportation in 2016. It is a family reunion overshadowed by a collective family exile in a world where Salah is denied the right to live and raise a family in the city of his birth. Like the millions of Palestinians exiled since 1948, Salah will now struggle for his right to return to his homeland; a right enshrined to all displaced peoples across the globe.

We call on the international community to stand with Salah Hammouri and his family during these tough and brutal times not only for them but also for the Palestinian people as a whole. His expulsion—however painful in the present—only proves to be one step on the long and painful road to liberation, a road paved by the sacrifices of Palestinian advocates and their indefatigable will for freedom.

Salah Hammouri has been a fierce advocate and human rights lawyer at Addameer. As a field researcher in Jerusalem, he played an inimitable role in connecting to Palestinian children and youth who, like him, had been subjected to violent arrests and detention by the Israeli occupation forces. Despite the physical loss of Salah in the office, Addameer will continue to persist in its mission to advocate for Salah’s case and the cases of all former and current Palestinian political prisoners held in Israeli occupation prisons.

For regular updates and more information about Salah Hammouri visit the JusticeForSalah website: https://justiceforsalah.net/ and follow Addameer and the campaign’s social media accounts.