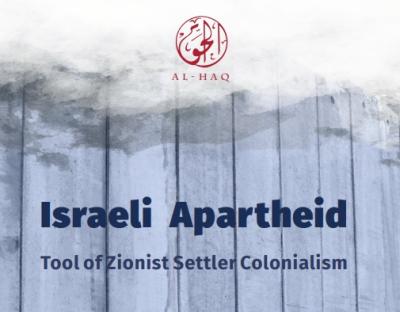 Importantly, the report is the first major Palestinian publication to expand the current international discourse on apartheid, and importantly, examines apartheid as a structural element of furthering Zionist settler colonialism on both sides of the Green Line. Further, the report illustrates the additional need to end Israel’s settler colonialism and the fulfilment of the Palestinian right to self-determination. The report adds clear Palestinian voices and analysis to the wider international calls demanding an end to Israel’s apartheid regime. Palestinian civil society demand decolonisation and dismantling of Israel’s settler colonialism and apartheid regime, the fulfilment of the inalienable right of the Palestinian people to self-determination, systematically denied since the British mandate, and the right of refugees and exiles in the diaspora to return.

This ground-breaking apartheid report is the product of four years of research and advocacy by the coalition of Palestinian human rights organisations. In this time, and from the efforts of this coalition, there has been growing acceptance of the reality that is Israel’s oppressive apartheid regime by the international community. While Addameer is encouraged by the growing global recognition of Israeli apartheid, we note that Zionist settler colonialism and its eliminatory and population transfer logic remain absent from recent analyses and reports on apartheid by Israeli and international human rights organisations such as Yesh Din, B’Tselem, Human Rights Watch, and Amnesty International. It is this gap that the present report seeks to fill.

This report aims to expand on the current apartheid discourse, and push for the recognition of the colonial practices of Israel, both past and present, and its consistent use of settler colonial policies against the Palestinian people, recognising the connection between the Palestinian struggle for self-determination and the wider, global movement of indigenous liberation against both colonialism and other associated forms of structural and institutionalised racism.

Since 1948, Palestinians have endured an ongoing Nakba (catastrophe) of forced displacement, refugeehood, and exile; the denial of their right to return to Palestine; and an ongoing process of domination, foreign occupation, annexation, population transfer, and settler colonisation. It is within this frame of both historic and ongoing violations that Al-Haq analyses apartheid as a tool for the wider Zionist settler colonial project, rather than in isolation from contextual facts. The contents of the report explore all aspects of Israel’s institutionalised racist regime, including its formational history, before and during the start of the Nakba in 1948; the legal basis of maintaining apartheid in Israel’s constitutional Basic Laws, other legislation and military orders; and the importance of delivering the long promised self-determination of the Palestinian people.

Among the many conclusions from this report, a key take away is how any description of the situation in Palestine as a ‘conflict’ ignores the reality of the situation. The unfair power dynamic, the prolonged indefinite occupation, the exploitive nature of this occupation, and the constant transfer and expulsion of population with complete disregard for international law shows Israel’s policies are more than an apartheid regime, they amount to a colonial-settler policy in the 21st century, with the intention of uprooting and erasing the Palestinian people from their homeland.

We stress that there can be no solution to the situation as long as the international community continues to ignore Israel’s systematic human rights abuses and settler colonial apartheid regime and through it, sustain the illegal Zionist colonial settler project at the cost of Palestinian liberation. This report calls on the international community, the United Nations, states and communities worldwide to act against Israel’s settler colonial apartheid regime through a series of recommendations, including: