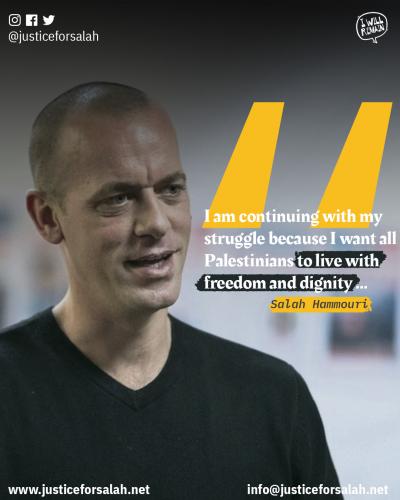 On the morning of his expected release from Ofer prison, Israeli occupation authorities notified Salah Hammouri, Palestinian lawyer and human rights defender, of a three-month administrative detention renewal order against him. Although the Israeli military commander signed the renewal order against Salah on 2 June 2022, Salah and his legal counsel were only notified moments before his expected release. Salah's administrative detention, without charge or trial, based on "secret information" is still subject to indefinite renewals.

Extension of the administrative detention period severely increases the psychological suffering of Palestinian detainees. Once detainees begin to think that they will soon be released, the Israeli occupation authorities often renew the detention order without any charges. Several studies on the effects of administrative detention showed the element of unpredictability, loss of control, and the absence of a specific end date are all contributing factors to causing acute pressure on detainees and their families that force them to live in a "permanent state of waiting."

The arbitrary arrest and detention of Salah Hammouri are made more urgent and exceptional in light of the Israeli Minister of Interior's unlawful decision, on 18 October 2021, to revoke his permanent residency status in Jerusalem based on a "breach of allegiance to the State of Israel." The initiation of his residency revocation under Amendment No. 30 to the Entry into Israel Law of 1952 entails profound violations of international law and puts him at imminent risk of forced deportation.

Salah Hammouri, 36 years old, is a Palestinian-French Jerusalemite, long-time human rights defender (HRD), a lawyer with Addameer Prisoner Support and Human Rights Association, and a former political prisoner. Salah has been the subject of Israeli persecution since he was 15 years old when he sustained a bullet injury in 2000. He was first arrested at the age of 16 and has since then been facing continuous judicial and administrative harassment by the Israeli occupation authorities, including six periods of imprisonment and arbitrary arrests, several travel bans, excessive bail and fines, house arrests, and separation from his family, surveillance and spyware attack.