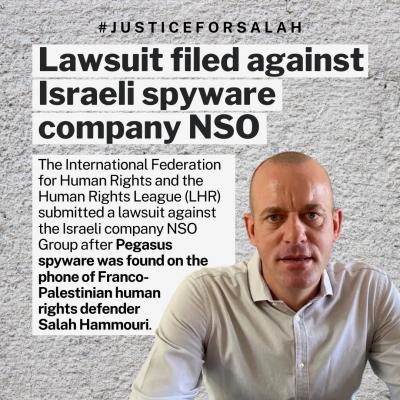 The International Federation for Human Rights (FIDH), the Ligue des droits de l’homme (LDH) and Salah Hammouri filed a joint complaint in France targeting the Israeli cyber intelligence company NSO Group, for illegally infiltrating the phone of French Palestinian human rights defender Salah Hammouri. The violation was initiated in the Occupied Palestinian Territory and continued on French soil, which constitutes a violation of the right to privacy under French law.

In October 2021, Salah Hammouri contacted Front Line Defenders to initiate an examination of his phone after learning of the infiltration of other Palestinian human rights defenders’ phones. Front Line concluded its investigation by November 2021, and The Citizen Lab and Amnesty International confirmed its findings.

The investigation revealed that the phones of Mr. Hammouri and other Palestinian human rights defenders were hacked using Pegasus, spyware manufactured by NSO Group. The investigation confirmed that Mr. Hammouri’s phone has been infiltrated in April 2021. In December 2021, Mr. Hammouri approached FIDH to represent him in filing a legal complaint against NSO Group, which has been using this spyware illegally to hack and infiltrate his phone, and through it, his entire professional and private life, thereby depriving him of his right to privacy among others.

“We now urge the Paris Prosecutor to open a preliminary investigation into the violations denounced in our complaint,” said Emmanuel Daoud, Clémence Bectarte, and Patrick Baudouin, who filed the complaint today on behalf of FIDH, LDH, and Salah Hammouri.

Mr. Hammouri, has been the subject of Israeli persecution since the age of 15 when he sustained a bullet injury in 2000. He was first arrested at the age of 16 and has since then been facing continuous harassment by Israeli authorities for his human rights activism, including six periods of imprisonment and arbitrary arrests, several travel bans, exorbitant bail and fines, house arrests, separation from his family and residency revocation. He is currently facing an imminent threat of deportation and most recently on the 7th of March 2022 was subjected to another illegal administrative detention for a period of three months subject to indefinite renewals according to the Emergency Regulations applied by the Israeli military commander in the West Bank.

“I am continuing with my struggle because I want all Palestinians to live with freedom and dignity, and I know this will not come without a fight, without sacrifice on the part of those willing to take a stand,” said- Salah Hammouri.

On 18 October 2021, Israel’s Minister of Interior issued a decision to revoke Mr Hammouri’s permanent Jerusalem residence card. The decision is based on Mr. Hammouri’s alleged “breach of allegiance to the State of Israel” and on vaguely worded and poorly defined allegations of "terrorist activities" and/or affiliation with "terrorist entities", relating to "secret information." If this measure is implemented, it would mean that Mr. Hammouri, who was born in Jerusalem in 1985 and has lived there his entire life, would be permanently expelled from his country of origin and centre of life without being able to return. It will also set an extremely dangerous legal precedent to be used systematically by Israeli authorities to revoke the residencies of Palestinian Jerusalemites in its attempt to empty Jerusalem of its Palestinian population.

“Taking advantage of human kind’s achievements in the field of technologies to commit human rights violations must be stopped and accountability measures are urgently needed. Failing to bring NSO and affiliates to justice encourages the continuation of the persecution of human rights defenders,” said Shawan Jabarin, vice president of FIDH.

FIDH and LDH condemn these abusive and arbitrary measures. The attacks on Salah Hammouri seem to be aimed solely at punishing him for his legitimate human rights activities, in particular in support of Palestinian political prisoners. These attacks are part of a broader campaign of the Israeli government to delegitimize Palestinian and Israeli human rights groups and human rights defenders, and actively lobbying to cut their sources of funding.

NSO Group has been facing several lawsuits around the world for its illegitimate use of technologies in violation of human rights laws and principles. Several NGOs, including FIDH, urged the European Union to put NSO Group on its global sanction list and take all appropriate action to prohibit the sale, transfer, export, import, and use of NSO Group technologies until adequate human rights safeguards are in place. It is vital that when businesses abuse human rights, adequate sanctions and measures are adopted, and that victims have a right to remedy any violations. As FIDH has repeatedly advocated, any regulation in this sense at the European level needs to tackle all businesses including companies operating in the technology sector.

The filing of the legal complaint is welcomed and commended by leading human rights organizations and key investigators of the NSO Group, including:

Al Haq Organization - Law in the Service of Mankind

The Palestinian Institute for Public Diplomacy

7amleh – Arab Center for the Advancement of Social Media

24-01-2023
Commemorating the International Day of Education by Highlighting the Reality of the Right to Education for Palestinian Political Prisoners
08-12-2022
Palestinian-French Human Rights Lawyer, Salah Hammouri, is under Imminent Threat of Forcible Deportation from his Hometown Jerusalem to France
18-12-2022
Israeli Authorities Commit War Crime of Forcible Deportation against Palestinian-French Human Rights Lawyer Salah Hammouri
Available in English